Because the office at Rustic Sands Campground was closed when we arrived Friday night, I was up bright and early yesterday morning to get in and pay for our site, and to see if they could recommend a shop to work on our coach. The office was supposed to open at 8 a.m. and I got there about 8:30, only to find it still closed. Hmmm, that’s strange. Then I looked at my phone, and realized it was only 7:30! We went through a time zone change the day before, and nobody told me about it! I could still be tucked away warm and cozy in my bed. Who changed the darned time? Heads will roll!

I went back to our motorhome, sniveled a little while, had a cup of hot chocolate to warm myself up, and when I returned to the office it was open and a very nice young lady named Candis, and one of our blog readers, Doug Titus, were waiting there to greet me. Doug had already read my blog and knew we were having mechanical problems, and they had several suggestions for places to call. Candis also called her uncle to ask him for any recommendations. What a wonderful way to help a stranger with a problem! Thanks Candis and Doug, I really appreciate it.

Candis’ uncle recommended Dave Gainous at Gainous Services, in nearby Port St. Joe, and he even called Dave to ask him to open up his shop on a Saturday morning to  take a look at our rig. Dave lives right next door to the shop, and was waiting for us when we arrived. I backed the motorhome into his garage, and then we had to spend some time figuring out how to get to the fuel filter. I have never owned a vehicle that was easy to work on, and our Winnebago was no exception.

But Dave was up to the challenge, and in short order he had the old filter off, and the diesel he poured out of it was black and nasty. I think we definitely had an algae problem, along with condensation. Dave had called one of his suppliers to see if they had a filter in stock. Actually, they had two in stock, and I told Dave I’d buy both, so I’d have a spare, as several blog readers had recommended. Dave made a quick trip to pick up the filter, and then it was an easy task to get it installed, prime the fuel line, and get us started. We were back on the road a little after noon. If you’re anywhere around Port St Joe or Mexico Beach, and need mechanical repairs done, give Dave a call at (850) 227-5072. He told me he doesn’t want to take on major projects on an RV, but for things like oil changes, brakes, etc., he’ll take good care of you.

The motorhome is running great again, and as soon as we got to an auto parts store with a big enough parking lot to pull into, I stopped and bought some diesel fuel additive and poured it in the tank to clean out anything else that may still be lingering in the tank. I’ll treat it again when I fill up later on today.

We left Port St Joe and cruised west on U.S. Highway 98 through Tyndall Air Force Base and into Panama City, where traffic immediately got much busier. At Panama City Beach, we stopped at the Man in the Sea Museum to gather some info and photos for a story in the next issue of the Gypsy Journal. If you’re into diving, this place has an amazing collection of exhibits on display, from antique hard hat diving gear to Sealab-1, the world’s first underwater living facility. It’s a cool place, and I’m glad we could make it there before they closed. 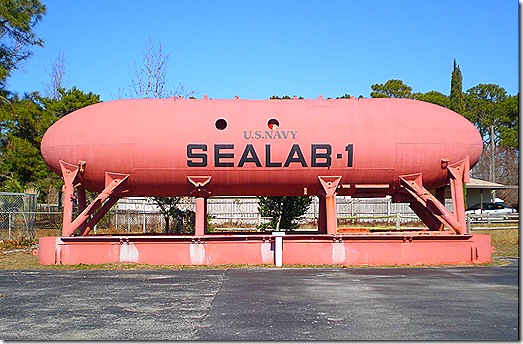 Several people had asked us to stop by on our way across the Florida Panhandle, or invited us to stop for the night in their driveways, but we were running behind schedule due to the breakdown. We needed to get to Eagle’s Landing RV Park in Holt to meet with Dick and Judy Riblett, who also run Recreation USA Camping Club and have been friends and advertisers for years. They have both had some serious health issues in the last few years, but have finally overcome them and are doing great. We had a nice dinner with Dick and Judy, discussed some plans they have for promoting their camping club, and Dick picked my brain a little about using the internet to maximize their efforts. There’s not a lot of useful information in there, so I hope Dick was able to get enough to help him out a little bit.

Today is a very special day for us, it’s our thirteenth wedding anniversary. Can you believe that Miss Terry has put up with me that long? I tell you, the woman in a saint. She is also my best friend in the whole world, my lover, my partner, and my hero. People are always telling me how much they like my newspaper, or my blog. or my rallies, and I have to remind them that this is a team effort, and nobody knows that more than me. Terry is both the brains and the beauty of this operation, and I owe every bit of whatever success I may have to her. I always tell folks at our rallies that without Terry doing the 1,001 things behind the scenes that make it all run smoothly and make me look good, I’d just be a fat man up there on stage telling jokes. She made me what I am.

Terry,  I hope you know how much I love, respect, and cherish you. Thank you for all that you do, and all that you are. Happy anniversary, my darling.

Thought For The Day – Grow old along with me, the best is yet to be. (Robert Browning)

26 Responses to “Hey, Who Changed The Time?”