Yesterday was the last warm day we’ll probably have while we’re here in Florida. I think it topped out at 68 degrees. Starting today, the daytime temperatures are going to be in the 50s, with overnight lows in the mid-20s. I don’t think we’ll be here much longer; in just a few days we’ll be headed west.

Several rigs left the Escapees Sumter Oaks campground yesterday, headed for the Tampa RV Show. Among them were Paul and Linda Odom, who caravanned to the RV show with four other rigs. Before they pulled out, Paul and Linda came over to get one last look at the custom desk/work stations that our friend Carlyle Lehman at Focal Wood Products built for us. Like everyone who has seen Carlyle’s work, they were very impressed.

After Paul and Linda left, we drove into Brooksville to make a bank deposit, and then we drove a few miles south on U.S.Highway 41 to Masaryktown, a wide spot in the road with an interesting history. In the mid-1920s, a group of Slovak and Czech immigrants from New York and Pennsylvania moved to this area to establish a farming community. They named their town after Thomas G. Masaryk, the first president of the independent republic of Czechoslovakia.

Their first attempts at growing citrus and vegetables didn’t work out, because heavy frosts destroyed their crops, but eventually Masaryktown became a thriving chicken farming and egg producing community. The settlers maintained their Slovak cultural traditions for over 50 years, but eventually the town faded away. Today all that remains of the community is the Cafe Masaryktown, housed in a three story building that was the Masaryk Hotel during the town’s heyday. 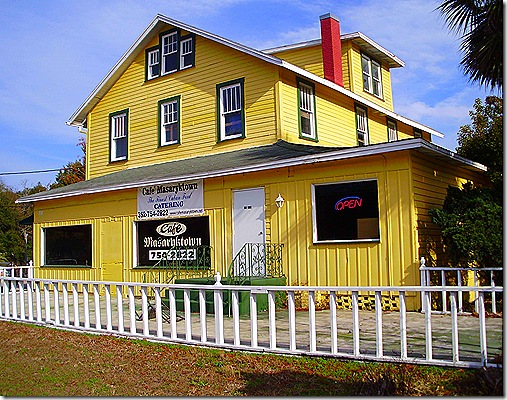 We discovered Cafe Masaryktown several years ago, when we were in Brooksville for an FMCA rally, and we were impressed with the food and service. Ever since, we have wanted to go back. We were glad we did! It was even better than we remembered!

While you can order a burger or steak sandwich at the restaurant, we can get that kind of food anywhere. We wanted something different. I had the 9 inch Cuban sandwich & fries, and even though I’m a big eater, I could not finish it all. If you have never had a Cuban before, it’s a delicious combination of baked ham, Genoa salami, Cuban style pork, and imported Swiss cheese on Cuban bread. One bite of one of these, and you’ll never darken Subway’s door again! 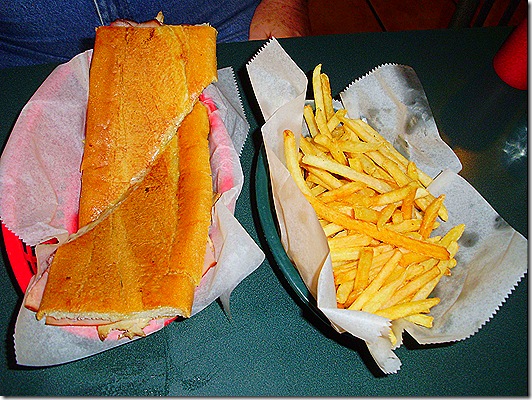 Miss Terry had the Pork Medallions, which were chunks of pork fried until they were crispy on the outside and juicy inside, and served with mojo sauce. Her meal came with fried yuca, black beans, and plantanos. Terry let me sample a couple of pieces of the pork, and it was fantastic. I had never tried yuca before, and it was delicious; a starchy root plant similar to potato. 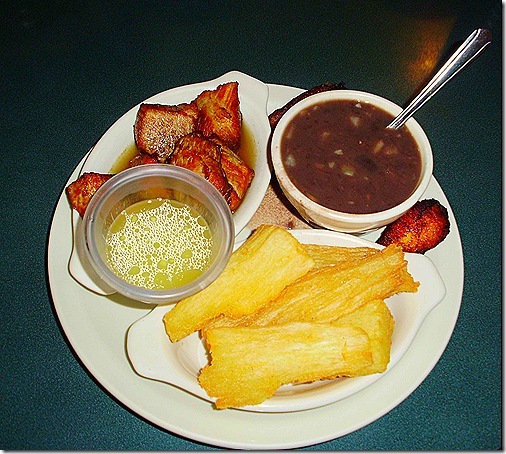 The folks at Cafe Masaryktown are proud of their food, and they want their guests to know that good food takes time, as this sign explains. Trust me, it was well worth the short wait!

The restaurant is not fancy, but it was worth every inch of the 27 miles or so we drove to get there. If you are like Terry and me, and enjoy finding good local restaurants that are a change from the standard chain places, put Cafe Masaryktown on your Must Do list for central Florida.

We got back to the campground just in time to close the motorhome up for the night, and spent the evening watching TV and cruising the internet.

There are a couple of places I want to hit in the next day or two to get stories for our next issue of the Gypsy Journal, and we’re closely watching the weather forecasts along our intended route. We don’t mind driving in cold weather, if it can’t be avoided, but we don’t want to get caught up in any of the snow and ice storms that have dipped so far south this year.

Thought For The Day – The only reason I would take up walking is so that I could hear heavy breathing again.