After all of the fun and activity of my family reunion on Saturday, we had a lazy Sunday. Just as I promised in yesterday’s blog, we slept in late, then spent most of the day in the motorhome, just taking it easy. Every once in a while, a day like that is good for everybody.

Paul Odom came by and we chatted for a while, and Miss Terry gave him the grand tour of our Winnebago motorhome. Paul and his wife had a 40 foot fifth wheel and a big Volvo truck, then downsized a bit to a 35 foot Winnebago motorhome. He used to own a Ford Explorer, and wanted to look over the way we set ours up for towing, because he’d like to get another one.

While Paul and I were standing outside kicking tires, Don Loveday wandered over to join the conversation. Just like Paul,  Don was also at our Eastern Gypsy Gathering rally in Indiana last summer. We RVers do get around, don’t we?

Miss Terry made me a delicious brunch of French Toast made with her homemade potato bread from the recipe she had in her Miss Terry’s Kitchen blog a few days ago, and it was wonderful. Like I’ve said before, I’ll never be a thin man. 🙂

After seeing the pictures in yesterday’s blog about the original Hooters restaurant location, my buddy Greg White sent me a picture of the World’s Tiniest Hooters, on the Alabama Gulf Coast. So I had to call Greg so we could decide which was better (or worse, depending on your point of view, I guess), seeing the oldest Hooters or the smallest Hooters. Yeah, I know. Miss Terry and Greg’s wife Jan keep hoping we’ll outgrow it, if we ever get past puberty. 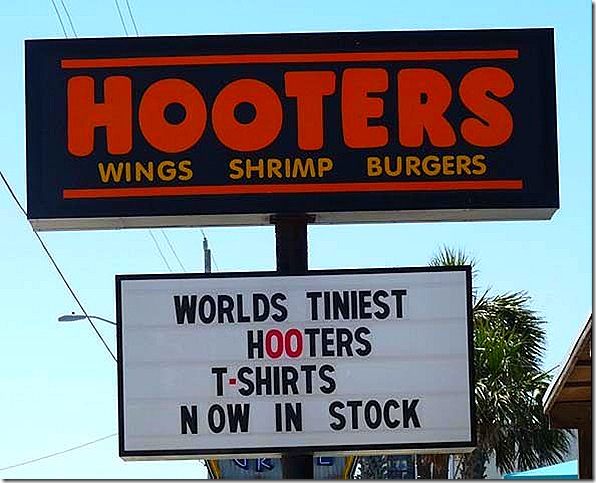 The afternoon was pretty much just like the morning; laid back and lazy. Miss Terry did a couple of loads of laundry,  I dumped our black tank, snoozed on the couch for a few minutes, and updated some info in my family tree on Ancestry.com. Meeting all of my kinfolk in Florida means that I have a lot of new family members to add. There is a whole army of wives, kids, and grandkids I have to add.

About 7 p.m. our friend Al Hesselbart, historian for the RV Museum in Elkhart, Indiana, picked us up and we went to dinner at a very nice Chinese restaurant in Brooksville called Buffet City. We arrived well past the dinner hour, but the selection was excellent, and everything was hot and tasted great. We’ll definitely go back again.

We plan to go to the big Webster Flea Market today if the weather cooperates. The forecast is calling for showers in the morning and then thunderstorms later in the day, so we’ll have to see how that works out. So far this winter, the weather has not cooperated very well for a lot of what we wanted to do.

We had originally planned to stay in Florida until late in January, before we started our trek west for our Arizona Gypsy Gathering in Yuma. But temperatures later this week are only predicted to be in the mid-50s here in Bushnell, so we may just say the heck with it and leave sooner. If all we’re going to do is sit inside anyway, we may as well be sitting inside putting miles behind us.

Miss Terry also took advantage of our day at home to post a new Roasted Butternut And Acorn Squash Soup recipe to her Miss Terry’s Kitchen blog. Check it and and let her know what you think.

Thought For The Day – I have to exercise early in the morning, before my brain figures out what I’m doing.

One Response to “A Lazy Sunday In Bushnell”