Can you believe  that three months from today, our Arizona Gypsy Gathering rally will begin? That may seem like a long time to you, but believe me, from our perspective, it’s coming up fast!

There is a tremendous amount of work involved in planning and pulling one of these events off. With over 225 RVs attending, and a ton of walk-in visitors who are staying at local RV parks, it’s a real juggling act to have enough different seminars to meet everybody’s needs. Not to mention the logistics of providing morning coffee and donuts for everybody, making sure the different seminar rooms have the equipment each speaker needs, and that we don’t have two seminars in the same time slot that compete too heavily with each other. And did I mention the evening entertainment, or feeding several hundred hungry people pizza in a matter of minutes at our pizza party? All of of that is after we get all of those RVs in and parked!

I’ve been giving our seminar lineup a lot of thought. One part of me says that there are already a lot of events with seminars on the basic RV stuff like how to hook up campground utilities, basic RV systems, RV tires, etc. So maybe we should concentrate more on seminar topics that folks can’t get everywhere else, like the seminars we had on Kayaking For Beginners and Bicycling For RVers at our Eastern Rally in Elkhart this summer. But then again, if you’re a brand new RVer coming to your first rally, you need those basic seminars.

I’d like to see more seminars on RV destinations, places to go, and things to do when you get there. If anybody who is going to be at the rally has an idea for a seminar that they’d like to put together along those lines, or on any topic, for that matter, or maybe a craft class, send me an e-mail at editor@gypsyjournal.net and tell me about it.

I’m not sure what we’re going to do about T-shirts for the Arizona rally. Everybody says that they want rally shirts, but we have to order at least 100 to get the pricing that we can afford. Then, we usually end up with 40 or more shirts left over, which means we lose money anyway. Somebody suggested that we only take pre-orders that are paid in advance, but then people at the rally say “I wanted one too!” So I’m just not sure if we’ll have shirts in Yuma or not.

Several people said that we could just donate the leftover shirts to charity, and that sounds good, but it’s still money that we spent and received no return on, and as a business, the idea is to make a profit.

Miss Terry found a use for some of the T-shirts that we had left over from the rallies. The other day she made a rug from several leftover shirts. Looks cool, doesn’t it? The bits of yellow, black, and white you see in the rug are the printed logos from the T-shirts. 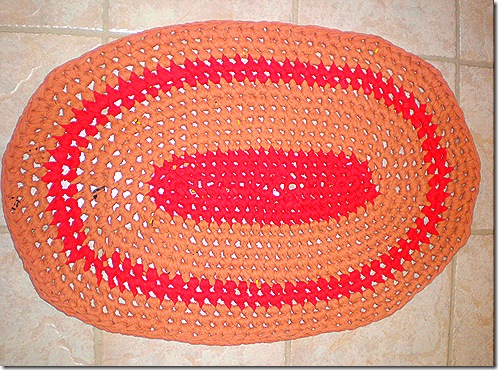 Speaking of my beautiful bride, two people have expressed condolences to us in the last few days over the loss of Terry’s mom. I don’t know where that rumor got started, and while we appreciate your concern, Terry’s mom, Bess Weber, is alive and well, and just as feisty as ever. My parents have been gone for many, many years, but Terry’s parents, Pete and Bess are still healthy, active, and very involved in life, their church, and their family’s activities. I know a lot of people half their age that are not in as good shape.

We only have a week to go on our Buy One, Get One Free Holiday Special Offer. A lot of folks have taken advantage of the savings, and there’s still time for you to renew or extend your subscription, and get a free subscription for somebody on your Christmas shopping list too! Just click the link below, while there‘s still time

Whatever you’re doing today, I hope you take a moment to remember our fellow countrymen who were lost 69 years ago today during the Japanese sneak attack on Pearl Harbor. That terrible Sunday morning changed the world forever, just as the terrorists attacks of 9/11 did. The only difference is that back then, our nation had the cajones to kick ass and take names, as we used to say in the military.

Hey, I’m starting to sound like Bad Nick, so I’ll stop for now, but check out his latest Bad Nick Blog, titled Silly Sarah, and leave a comment.

Thought For The Day – No matter how bad you feel, get up, dress up, and show up.

4 Responses to “Rallies, Rugs, And Rumors”