Today is our last day in Fort Lauderdale, and it sure has been a fast week! Between bad weather and getting the new issue of the Gypsy Journal wrapped up, we haven’t gotten to see much during our stay.

But last night Jim and Chris Guld from Geeks on Tour took us for a quick tour of some of the city’s highlights when we went out to dinner, and it is obvious that they have a lot of affection for the place. Chris went to high school here, and Jim lived here from 1985 until they went on the road a few years ago. Since Chris’ mom and Jim’s dad and son both live here, they spend a lot of time here at Paradise Island RV Resort.

We drove along the waterfront, where we saw the lights of huge ships making their way down the coast, and stopped to walk on the beach for a few minutes. Since it was dark, we didn’t get to see a lot, but anytime I’m on a beach, I’m a happy camper! We had a very nice dinner at an outside table at a restaurant called Coconuts. On our way in, we stopped to check out this huge pot of paella, a concoction that included saffron rice, lobster, crab, scallops, shrimp, onions, peppers, and assorted vegetables. It looked delicious, but at $26 a serving, we all decided we weren’t quite that hungry! 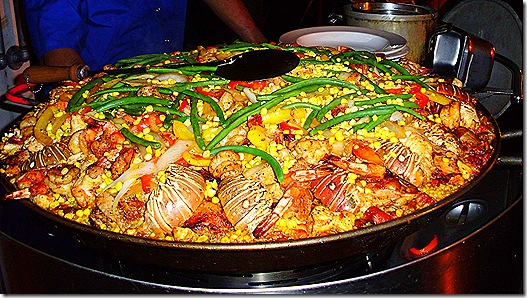 Jim and I had blackened mahi sandwiches, while the ladies had fish tacos, and we finished off with delicious key lime pie. Yummy! While we ate, we watched large boats cruising up the Inland Waterway, and smaller boats coming and going as people stopped at the restaurant’s dock. One of the waitresses took this picture of the four of us at our table. Don’t we look well fed and happy? 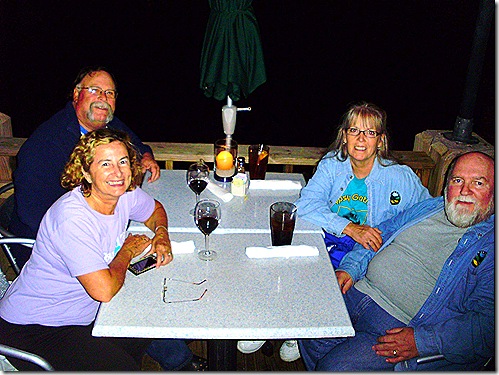 The restaurant is located right next door to the International Swimming Hall of Fame, which honors the achievements of famous swimmers, divers, water polo players, synchronized swimmers, and people involved in life saving activities. Did you know that the late radio and television personality Art Linkletter was  a world-class swimmer, or that if it weren’t for a bad bout of poison oak, he would have participated in the 1932 Olympic Trials. A college backstroke champion, Linkletter might well have earned a spot on the US Olympic swimming team. I wonder what direction the famed humorist’s life might have taken, if it weren’t for a bad rash?

We had a good time visiting with Jim and Chris at dinner. Besides being the world’s best mobile computer geeks, they are also accomplished kayakers and scuba divers. Miss Terry has always wanted to learn how to dive, which I had hoped she could do this winter. I think hearing all of Jim and Chris’s stories of their underwater adventures really whetted her appetite to try it!

Even though we didn’t get to play tourist very much, we did get some things accomplished in our time here, or rather, I should say, Chris got some things accomplished for me. Over time we will be moving all of our websites off the Yahoo servers, and she has a lot of the groundwork done for that. She also helped me with an ongoing problem I’ve been having with e-mail messages disappearing after I open them, or not getting to me at all, another problem that seems to have its origins with Yahoo. Thanks Chris, I really appreciate all of your help.

Thought For The Day – Why is the man you hire to invest all of your money called a broker?