When we checked into the Peace River NACO campground on Sunday the office was closed, so the ranger said to go up to the office anytime Monday morning and pay for our stay. Apparently “anytime” is first thing in the morning, because at 10 a.m. somebody was knocking on our door.

Since we seldom get to bed before 2 a.m., we don’t get up early, so by the time I threw on some clothes and got to the door, the person was driving away in a golf cart. After I brushed my teeth and combed my five or six hairs, I went to the office and paid for our stay. Geez, we’re here for fourteen days, it’s not like we were going to stiff them out of $70.

Over the years, we have gotten a lot of flack from other RVers who seem to be offended by our sleeping schedule. More than once some older RVer has said something about “lazy” people sleeping the day away. I usually tell them I’m not lazy, I was up late working hard so I could pay into Social Security so they can get their check next month. I mean, really, is it anybody’s business when we go to bed or get up, as long as we don’t make any noise or disturb them when we’re up and they’re in bed?

Since the rain had stopped and we had a nice blue sky overhead, even if it was still rather cool, we went down to check out the boat ramp to the Peace River, here at the campground. The river was nice and calm, and if it warms up some more, we want to get our kayaks wet. 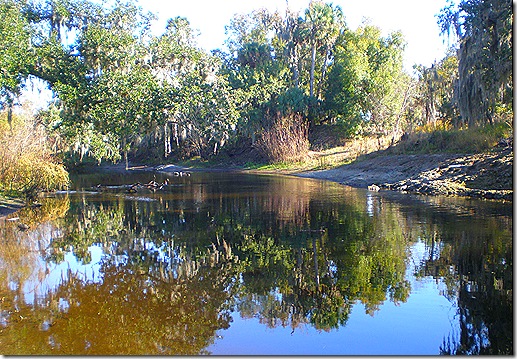 Okay, maybe we want to get our kayaks wet! I saw a sign about alligators at Lake Hancock at the Orlando Thousand Trails, and that didn’t bother me. But snakes? That’s taking things a little bit too far! I’ve heard of people wrestling alligators, but this fat boy don’t do snakes! 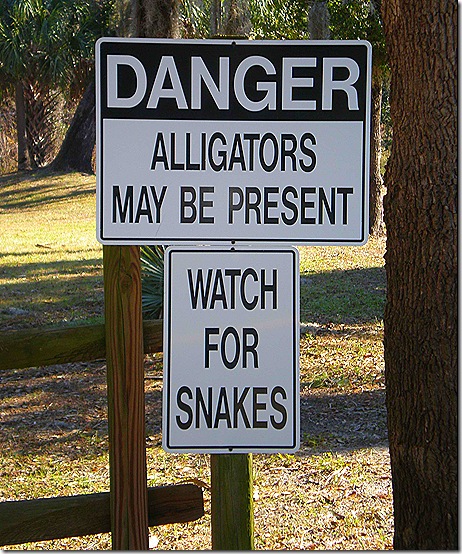 The Spanish moss that hangs from the live oaks trees all over Florida is even on the palm trees here at the campground! 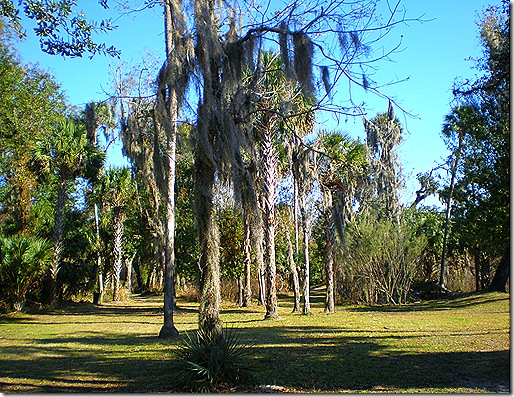 After picking up the license plates in the office, we drove into town to make a stop at the post office to mail off an order, then on to WalMart for a few things, and back to the campground. As we were driving back to our RV site, we stopped to take a picture of this motorhome with steer horns mounted on the front end. I wonder if this guy is from Texas? 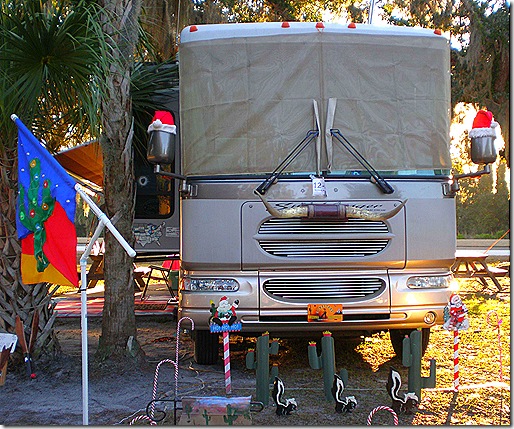 We spent the rest of the day at home. I answered e-mails, had a long exchange with a lady in Oklahoma who is looking at a used RV and was asking my advice because she had some concerns. After hearing them (105,000 miles on a 1999 gas powered Class A, many stains on the ceiling from obvious roof leaks, a musty smell inside the coach, a generator that would not start, and a broken windshield), I told her to run, not walk, away. She still wasn’t convinced, because at only $25,000 the seller tells her it’s a heck of a deal. Yes, it is. I’m just not sure if it’s a heck of a deal for him, or for her!

Thought For The Day – Good health is merely the slowest possible rate at which one can die.