Nick's Blog » What Would You Do To Save A Buck?

None of us like wasting money, and in today’s economy, a lot of people are finding ways to save every penny they can. But when does thrift become less advantageous than the effort or inconvenience required to achieve it?

One example is an RVer I know who never purchases fuel at stations near an interstate exit, because he says that more often than not, he can save two to three cents per gallon by driving an extra mile or two into town. Okay, so let’s say he has a 100 gallon fuel tank, and he waits until the gauge is at the 1/4 tank level. He puts in 75 gallons of fuel, and saves $2.25 (based on 3 cents per gallon savings). But how much fuel did he burn driving the mile or two into town and back to the highway? Not to mention the hassles of dealing with surface street traffic in a big rig. And again, he tells me that more often than not he saves money. That means there are times when he doesn’t pay any less. Then those extra miles actually cost him more than if he filled up at the exit!

When it’s convenient, we usually fill up at Flying J truck stops, because they traditionally give RVers a penny a gallon discount on fuel, most have dedicated RV fuel islands, an RV dump station, and allow RVers to park overnight. I don‘t go to Flying J because of the discount, although I am happy to get it. I go because I appreciate their RV friendly-attitude.

However, there are some Flying J locations, such as Kingman, Arizona, that I will bypass to pay a little more somewhere else, because the layout of that particular Flying J makes it extremely difficult to get in and out with a big rig. Since we have a 100 gallon tank, and I seldom let our fuel level get below half, saving 50 cents is just not worth the hassle.

We all know that we can save fuel driving at 55 miles per hour, as opposed to 65 or faster. But just how much fuel can we save, and is it really worth it? A few days ago, while driving along Interstate 95 in southern Georgia, I did a test. I set our cruise control at 65 miles per hour and carefully monitored our Silverleaf VMSpc engine monitor. Over a 20 mile distance, we averaged 7.3 miles per gallon. 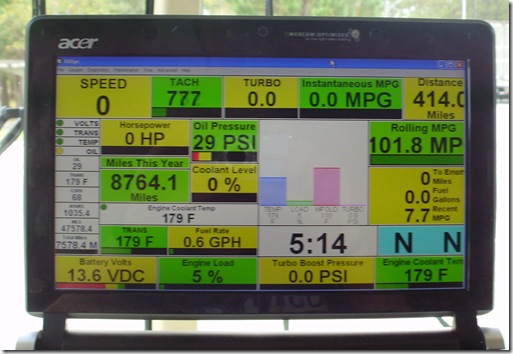 Then I dropped our speed down to 55 miles per hour, and reset the cruise control. Over the same flat terrain, we averaged 7.7 miles per gallon. So yes, at 55 miles per hour, we can save fuel. (By the way, ignore the 101 MPG rolling MPG on the readout, that was because I coasted into the rest area where Terry took this picture. Also ignore the 0% coolant level, my rig doesn’t have a sending unit for that, and I need to reconfigure the Silverleaf display to remove it.)

I’m terrible at math, but if I punched the right buttons on my calculator, that means that on a 1000 mile trip, on all flat terrain, we could save just over 7 gallons of fuel. Let’s assume that fuel is $3 per gallon. That’s a saving of about $21.

However, at 65 miles per hour, we were keeping up with traffic on the busy freeway. At 55 miles per hour, we had traffic piling up behind us waiting for an opportunity to get into the left lane and pass, and several times eighteen wheelers rushed up on our rear end and tailgated until they could get past. We did not feel safe driving at 55 in that kind of traffic.

Dry camping is another example.  We often pull into a WalMart, truck stop, or highway rest area to spend the night when we’re on the road. But we do it for the convenience more so than the economy. I don’t want to have to get off the highway and drive two or three miles to an RV park, unhook our tow vehicle, and back into an RV site, then hook up the campground utilities. And then in the morning I have to reverse the entire process.

When we dry camp like that, we usually run our generator for an hour or two while we watch TV and I use my desktop computer to check e-mail. That’s a couple of bucks worth of fuel, and worth it to me. However, if there is a convenient Passport America campground with pull-thru sites for $10 to $12 a night just off the highway, I’d as soon go there and have hookups.

If there is no handy WalMart or truck stop, I know RVers who will drive past that $10 or $12 campground and drive as much as five for six miles into town to dry camp at an Elks or Moose lodge. Again, is the effort worth the savings?

So what about you? What will you do to save a buck?

Thought For The Day – Everything is funny as long as it is happening to somebody else.

17 Responses to “What Would You Do To Save A Buck?”