A couple of weeks ago, I wrote that I was considering an inflatable kayak as a replacement for my hard sided Native Watercraft Manta Ray, and I got a lot of feedback comments from blog readers. Some shared their experiences with inflatable kayaks, and a surprising number said that they too have thought about an inflatable boat, and would be interested to see what I came up with.

After that blog came out, Tim Ryerson from Inflatable Boats 4 Less contacted me and offered to send me one of his Sea Eagle PaddleSki 435 catamaran kayaks to test. I’ve met Tim and his pretty wife Crystal at different RV events over the years, and Tim has told me several times that if I tried an inflatable kayak, I’d be hooked.

Tim said to play with the boat and write an unbiased review for my readers, good, bad, or indifferent. I’m impressed with a businessman who is that confidant in the quality of his products!

Two boxes arrived, a large one that held the boat, and a smaller box that held two paddles, two inflatable seats, a foot pump, and other supplies. The larger of the two boxes weighed about 50 pounds. Terry was able to lift it with no problems. 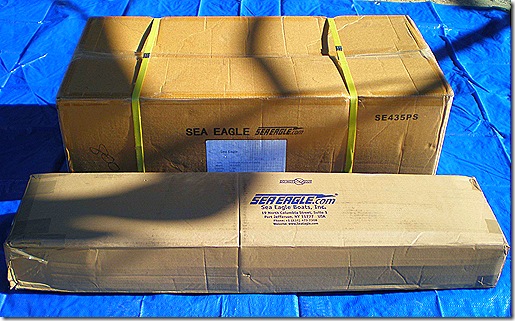 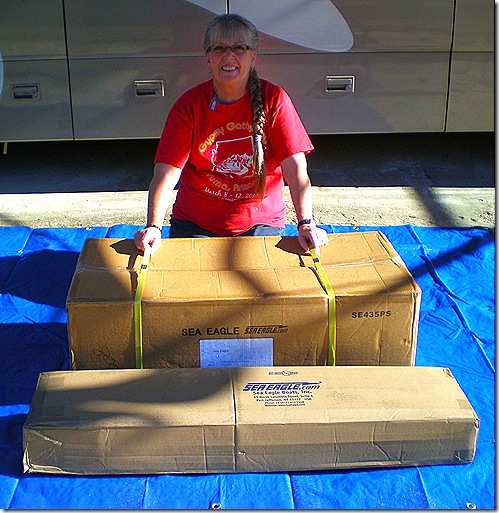 Following the directions Tim sent us, we unpacked the boat, and used the foot pump to inflate the two fourteen inch tubes. It took us about seven minutes to inflate the boat on our first attempt. Sea Eagle also has an electric pump available as an option, and I think it would be a good investment.

Sea Eagle calls the PaddleSki 435 five boats in one, because it can be paddled as a kayak, or with optional equipment available from Sea Eagle, you can row it, mount an electric trolling motor, a small gas motor, or even a mast and sail! I disagree though – to me it’s actually six boats in one, because it can be either a solo or tandem kayak! Once inflated, the PaddleSki is fourteen feet long, and just over 36 inches wide, with a capacity of 650 pounds. The boat weighs 41 pounds inflated, and is easy to carry. 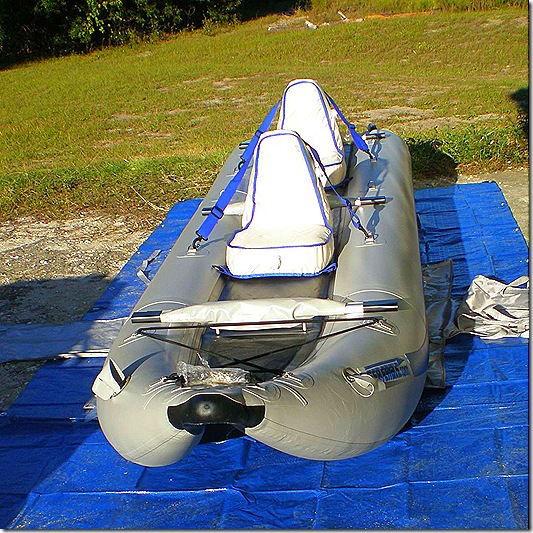 Yesterday we tested the Paddle Ski out on the Crooked River, here in central Florida, with our friends Denny and Cindy Henderson. The river is aptly named, because it has more twists and turns than a politician’s pedigree, and connects several lakes in what is known as the Clermont Chain of Lakes.

We put in at the boat ramp at Palatlakaha River Park, and the first thing I noticed was that the PaddleSki is so stable that getting on and off is much easier than in my regular sit on top kayak. I’m an incredibly clumsy guy on my best days, and I don’t have many good days. More than once I’ve fallen into or out of my kayak when launching or coming in, and my buddy Ron Speidel swears he’ll never go anywhere near me on a body of water again until I get launched, because last summer when we paddled together, he almost fell out of his kayak laughing at me! Not so with the PaddleSki. I’m not sure that I could turn this boat over if I tried!

As soon as I paddled away from the boat launch, my first impression was “Man, I love this boat!” I’ve been on the water in everything from rowboats and canoes, to several styles of kayaks, and I have never been in anything that feels so stable and comfortable. No matter how much I wiggled and moved around, the PaddleSki stayed solidly planted on the water. 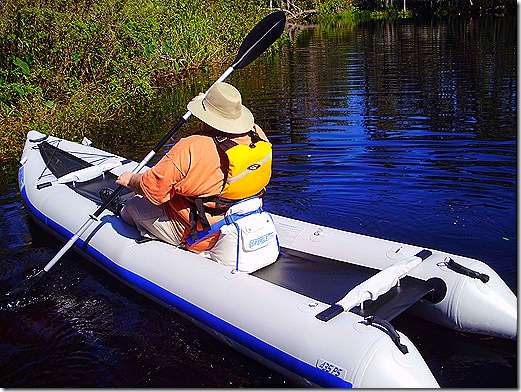 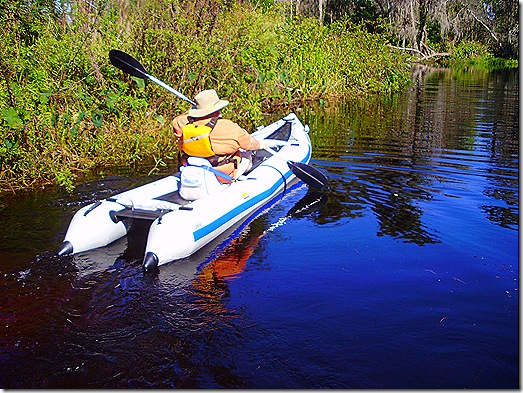 We paddled about 1/4 mile downriver to Lake Louisa, and then out onto the lake a short distance. There was no wind and the lake’s surface was as smooth as glass, and I became more impressed with the PaddleSki with every foot we paddled. This is absolutely my new favorite boat! It moves quickly across the water, it’s easy to paddle, and the skegs, one mounted on the bottom of each pontoon, make the boat track extremely well. Much better than any of the three hard shell kayaks I’ve owned. 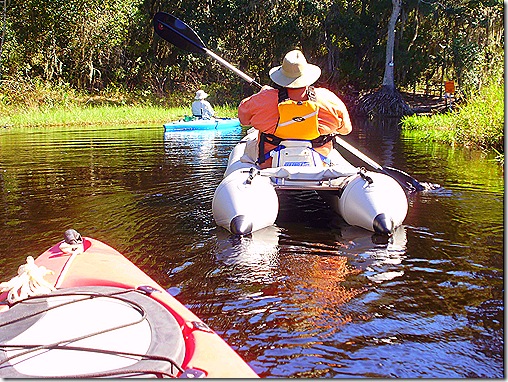 However, I just as quickly became aware that the inflatable seat that came with the boat was just not going to work for me. I felt like I was leaning backward, and before long my back was killing me. This is more a factor of my weight and my very bad back than any design flaw in the PaddleSki seats.  I’ve experienced the same thing with several different kayak seats. I doubt that most paddlers would have any problem with the inflatable seats that came with the Sea Eagle.

The most comfortable kayak seat I have ever had was the one on my first boat, an Ocean Kayak Prowler, and I told Terry that I think one would solve the problem I had with the inflatable seat. Of course, losing 75 pounds and not having a trashed back to start with probably would help too!

We paddled back upriver to the boat launch, and we moved Cindy’s kayak seat, with four mounting points, to the PaddleSki, and I tried it again. It was a major improvement, and later on when I called Tim from  Inflatable Boats 4 Less to give him my first impressions of the boat, he offered to send me one of Sea Eagles four point high back kayak seats to try. I think it will be a major improvement, and I appreciate the fact that Tim and Crystal want their customers to be satisfied, and will work to make that happen.

Denny took the PaddleSki for a short test ride, and came back to the launch ramp very impressed with the way it handled, then Miss Terry took it out on the river. You can see by the smile on her face that she was impressed! I asked Terry what she thought of the boat, and she said it’s very smooth, it tracks very well, it’s extremely responsive, and well balanced. If you can’t tell by now, in my opinion, the PaddleSki 435 is a keeper! 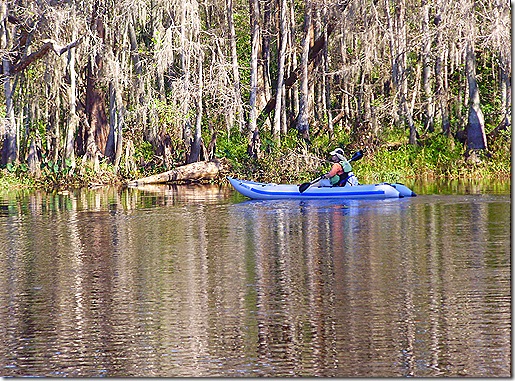 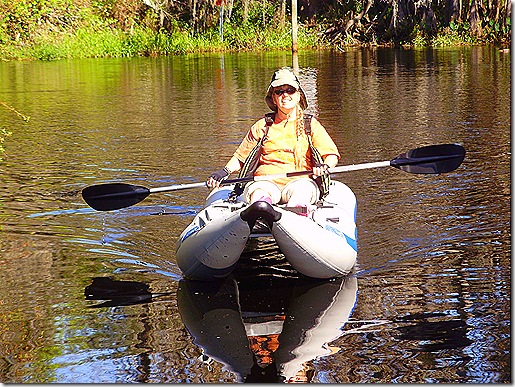 Unfortunately, because of the seat issue, I had to deflate the PaddleSki (which took two minutes) and get out my Manta Ray for the rest of the day’s paddling. What a difference in weight just carrying it to the water! The Manta Ray weighs 65 pounds, over half again as much as the PaddleSki.

Back on the water, I was immediately aware of the difference in stability between the two boats. The Manta Ray is an excellent kayak, and I am comfortable in it, but it is definitely much more “tippy” than the PaddleSki. Just wiggling or leaning a bit side to side will make the Manta Ray bounce all over the place.

We paddled upriver through some beautiful scenery to another big lake and out onto it’s surface, Denny stopping to cast for bass along the way. 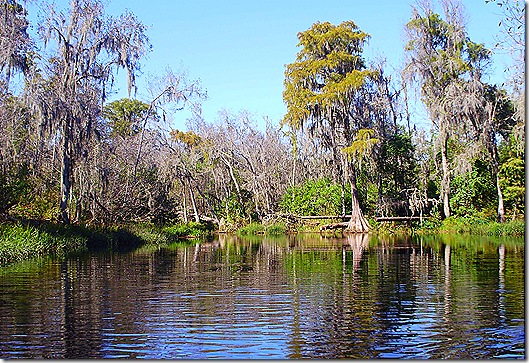 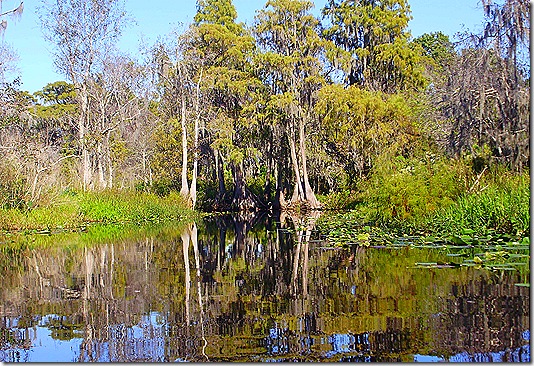 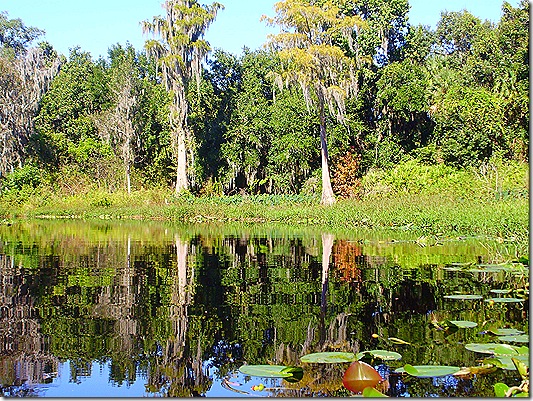 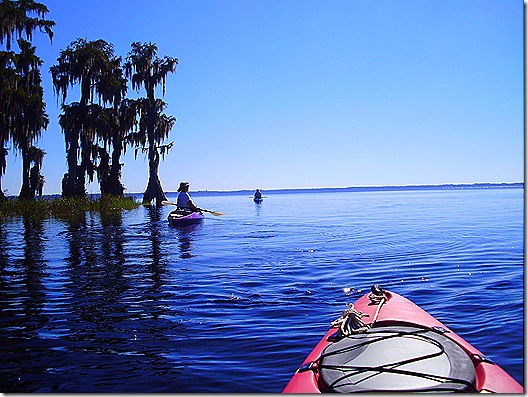 Once we were on the big lake, I got a real scare when a couple of guys in a bass boat went speeding past, throwing up a rooster tail of water behind them, and creating a strong wake. The safe way to take a wave in a kayak is head on, and the boat will ride up over the top and back down. But this happened so quickly that I didn’t have time to turn, and three fast waves hit me broadside, bouncing me all over the place.

Terry was sitting beside me when the waves hit, the bow of her boat against the side of mine in a T formation, on the lee side of the waves. If I hadn’t been able to grab onto her bow to steady myself, I think I may well have gone into the water. That was the first time I’ve been really scared in a kayak! Most fishermen have good manners and are courteous to other watercraft, but there are always a few jerks out there.

My friend Denny lives and breathes fishing, and had been casting into dark pools at the base of cedar stumps, and under docks, as we paddled by, hoping to hook something. As we headed back downriver toward the boat launch, Denny’s rod tip suddenly dipped sharply, and he had a fish on the line. It gave him a pretty good fight, but he brought a nice one pound largemouth bass to his boat, then let it go after posing for a picture for Miss Terry. 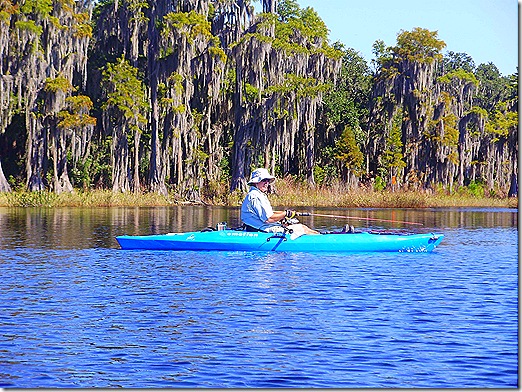 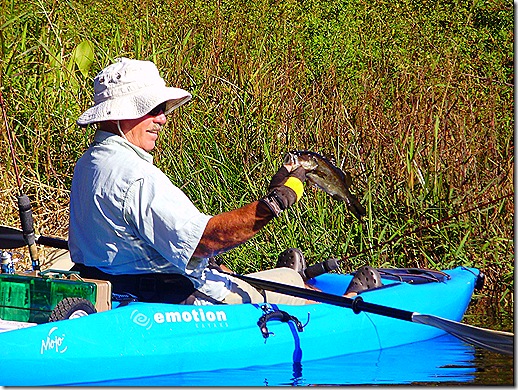 We spent close to three hours on the water, and had a wonderful time. But we sure were tired by the time we got back to the launch. Carrying our heavy boats back up to the van was a chore. I can’t wait until the new seat comes for the PaddleSki, so I can get it back out onto the water!

Thought For The Day – I may not have gone where I intended to go, but  I have ended up where I needed to be.