Well, it took a while, some trial and error, and my blood pressure was in the stratosphere for a couple of days, but it was worth it. Well, it was worth it to me. Miss Terry had to live with the grouchy bear I become when I get too stressed out from dealing with thieves and idiots, and I’m not sure she’d agree that anything is worth that! But, it all came together, and yesterday we resolved the issue with towing the Ford Explorer, and took delivery of it.

Actually, we already had it, because the folks at Dodge Chrysler Jeep of Winter Haven allowed me to keep it overnight Wednesday while we tried to figure out a way to get it set up to tow behind our motorhome. 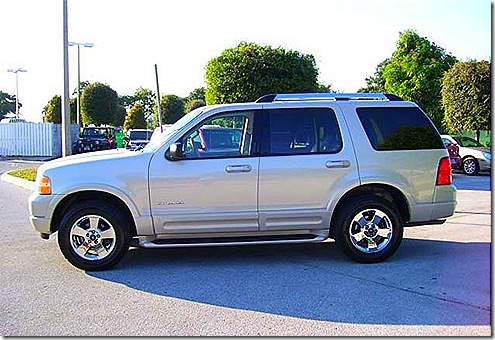 As I wrote in yesterday’s blog, the Explorer requires a Neutral Tow Kit, which is basically an LED light that plugs in under the dashboard, and a simple computer procedure from a Ford dealer to set up the transfer case for towing. However, the company that made the kit for Ford has gone out of business, and a dealer in Oregon bought up every kit available and was charging $375 plus $30 shipping, for an item that originally retailed for about $30. What a rip off!

A lot of internet research, and repeated phone calls to my two most reliable technical guys, Greg White and Ron Speidel, confirmed my belief that any LED light would complete the circuit and work. Thanks for all of your help and patience with my repeated phone calls, guys.

The next step was finding a Ford dealer that would “flash” the computer for me. Jarrett Gordon Ford, in Davenport, Florida was willing to try it, and it worked like a charm! A $2 LED light beats the heck out of over $400 to accomplish the same thing!

Once we knew that we could tow the Explorer, the next job was to unload our Ford van so we could drop it off at the dealer as our trade in, and do the paperwork. Do you have any idea how much stuff you can cram into an extended length Ford cargo van? A lot! We are going to have to get ruthless about what to keep and what to dispose of, because while the Explorer will carry the newspapers we take to RV parks and rallies, and our kayaks on a roof rack, it’s no cargo van. 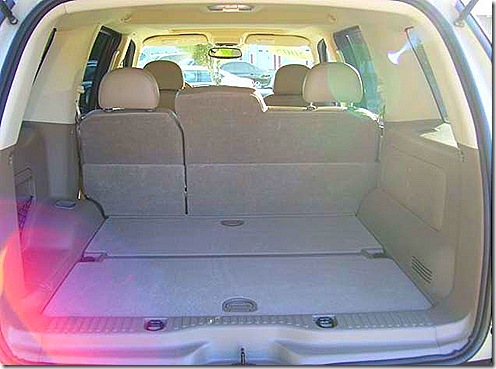 What it is is a very nice ride, maybe the nicest we’ve ever owned. The previous owner was a Ford executive who special ordered the Explorer as his retirement present, and it has every option that was available that year. Leather interior, power seats, power windows and door locks, power sunroof, zoned climate control, molded in running boards, and more than I can remember. These pictures are from the dealer’s web site, and are not great, but hopefully they will give you an idea of what it looks like. It’s tan with a tan interior. 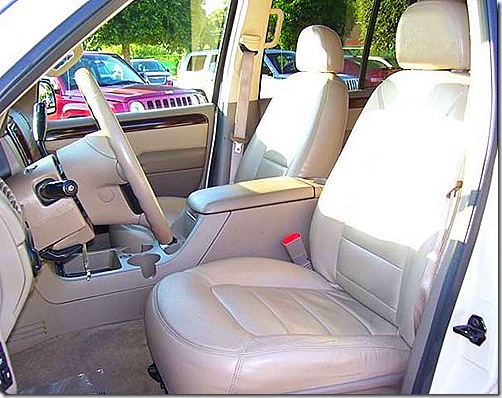 In fact, I was driving it home and playing around with all of the buttons and knobs, and suddenly I started feeling uncomfortably hot, even though the air conditioner was on. I told Miss Terry later that if I had been a woman, I would have sworn I was having a massive hot flash. As it turns out, I had turned on the seat heater, an option I never hope to be in cold enough weather to need!

The base plate for towing the Explorer is on order, and it will be a couple of weeks before we get it installed. In the meantime, I’ll drive the motorhome and Terry will drive the Explorer for the little bit of running around we’ll be doing between now and then.

By the way, if you are a fulltime RVer who is having trouble obtaining financing on an RV or tow vehicle because the bean counters at your bank don’t understand our lifestyle, call my friend Eileen Gilmore at Alliant Credit Union at (773) 462-2200, extension 3621, and tell her I sent you. Eileen will go the extra mile for you. She handled the purchase of our motorhome last year, and the Explorer now, and she has always been great to work with.

While I was busy with all of the details of the Explorer purchase, Bad Nick stayed out of the line of fire, and wrote a new Bad Nick Blog titled Coloring Outside The Lines. Check it out and leave a comment.

Thought For The Day – Adversity introduces a man to himself.