Hey, give me a break! You try coming up with clever blog post headlines every day! It’s hard work! 🙂

After reading yesterday’s blog, some readers wanted to know if the new high back seat from Sea Eagle was any improvement for my bad back. Yes, after paddling 90 minutes on Saturday afternoon, I had no back pain at all, and felt great!

Somebody else wrote to ask why we keep deflating the kayak after paddling it, and then re-inflating it the next time we go out, and was it because the Sea Eagle PaddleSki was too heavy to carry inflated in our van. No, the boat only weighs about 40 pounds, and as this photo shows, I can easily drag it out of the water and stand it upright. 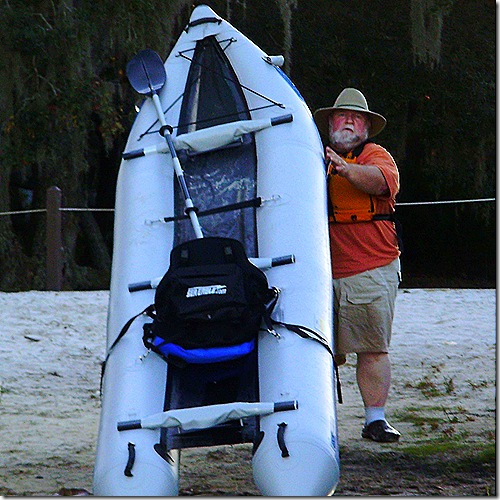 The problem is that our van is too tall for Terry and I to get it up there without using a ladder, and the inflated boat is over 14 feet long, so it won’t fit inside our van. Not counting the fact that our two hard kayaks are inside the van, as well as all of the newspapers we carry, and two Trek bicycles. It’s not all that much hassle to inflate and deflate the Sea Eagle, and it will be even less when I order the electric pump from Inflatable Boats 4 Less.

Yesterday morning, Dave Damon, who sells 303 products at RV rallies, came by to visit for a while, and we had a good time swapping lies. Then Terry and I had some running around to do, and drove down to Winter Haven, about 30 miles south of the Thousand Trails campground.

I have to be honest, I have never been enamored with Florida, but lately I have been thinking that with all of the water around here, and how much we love paddling and fishing, maybe we should switch our legal domicile to Florida. I could save some money on the cost of a resident fishing license over the much higher fees for a non-resident license. And getting back to Florida to renew our licenses would be easier than South Dakota, given our usual travel routes.

However, while talking to my car insurance company yesterday about another matter, I happened to mention changing domiciles, and was told that the higher cost of car and motorhome insurance in Florida would more than offset any savings on fishing licenses. We saved about a $1,000 a year on insurance when we switched from Texas to South Dakota, and I guess maybe we’ll stay right where we are.

Back at the motorhome, I had a long list of e-mails to answer, and an even longer list of forwarded junk, myths, and garbage that I just deleted without opening. I don’t mind a good joke now and then, and I’m guilty of forwarding one from time to time to a select group of twisted, sick people on my e-mail list.

But I really get tired of all of the stupid dire warnings of doom, the warm fuzzy stuff that is supposed to bring tears to my eyes, and the nonsense that anybody with half a brain cell could glance at and know is pure BS. I’m about to ban four or five folks from my inbox because they send me the same old junk over and over. I don’t need it, I don’t want it, and I don’t have time for it.

I also had an e-mail from a couple who have a fifteen year old gas powered Class C motorhome that they want to try fulltiming in this winter, before they spend big bucks on their dream rig. But they had heard from a couple of “experts” that “most” RV parks won’t let you in if your RV is more than 10 years old. These same experts had warned them that if they showed up anywhere in a rig that old, nobody would want to associate with them. They were worried that it was going to be a long, lonely winter.

I would be willing to bet that these “experts” are either RV salespeople trying to hustle them into a purchase, or else elitist jerks whom we could all do well without. For years we traveled in a 1976 homebuilt bus conversion, and we were never turned away anywhere we went, and we have never had a shortage of friendly neighbors in any campground from border to border and coast to coast.

Yes, there are a few RV “resorts” that have, and exercise, the ten year rule, but those are usually not the kind of places where I’d want to hang out anyway.  And as for being shunned due to the age of their RV, it just doesn’t happen most places. Sure, there is the occasional snob, just like anywhere in life. But overall, fulltime and extended travel RVers are some of the friendliest, most open and accepting people you’ll find anywhere. They don’t care what you drive, or what you do or did for a living. All they care about is if you’re friendly, if you have a couple of good campfire stories to tell, and if you want to ride along with them to the nearest buffet, or do you want them to ride with you!

Thought For The Day –  A friend knows the song in my heart and sings it to me when memory fails.