Nick's Blog » When Is It Time To Trade In?

A few days ago we covered the reasons to consider upgrading your present RV rather than going into debt to buy a new (or newer) motorhome or fifth wheel trailer. But a few people have written to ask when you should consider the other option, of trading in your old rig for something new(er).

Terry and I were faced with that decision last year. For over eight years we lived and traveled in the 1976 MCI bus conversion that we had built ourselves, and we loved that old bus. It was built like a tank, we had unbelievable cargo carrying capacity, and we could carry anything that we could find room to cram into it. We built the bus for extended boondocking, with huge holding tanks, 540 watts of solar power, a large battery bank, and a top of the line pure sine wave inverter.

If we were snowbirds who only went out to Quartzsite to hang out in the winter, or if we were weekend warriors, the bus would have been our home on wheels forever. In fact, we expected it to be. 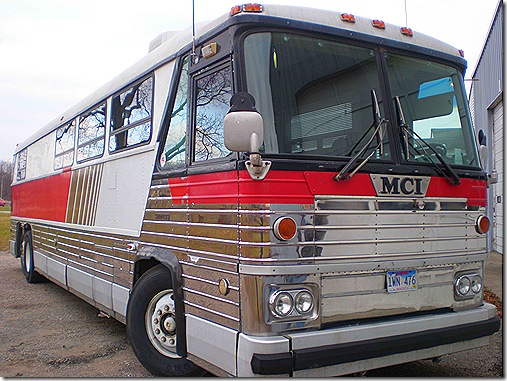 However, our needs and our traveling style changed over the years, and at the same time, the bus was beginning to need some major upgrades. We have done a lot of boondocking over the years; our longest stint was over seven months without being plugging into electrical power or water. We still don’t mind dry camping for a few days, but we have gotten to the point where we really enjoy being in a campground with full hookups.

We didn’t have slides in the bus, and as our two granddaughters have gotten older, it was getting really cramped when they visited us. We looked into having a living room slide installed, and the cost would have been over $10,000.

The 8V71 Detroit diesel was never a powerhouse, even new, and ours had a million miles on it, and it was getting older and slower every day. Climbing even moderate hills was presenting a real challenge, and the mountains out west were becoming impossible. We found ourselves not going places where we wanted go, because of the limitations of the bus. We were getting to the point where we were not enjoying traveling because we were always worried about a major breakdown.

Another problem was that it was getting harder and harder to find qualified diesel mechanics who knew enough about the old two stroke manually aspirated motors like we had. They are a dying breed. There are plenty of technicians who can plug an analyzer into a data port and tell you everything that is wrong with a modern diesel, but it takes an old school mechanic to understand the quirks of an old Detroit diesel.

We looked into replacing the motor, and the best quote we got for a factory rebuilt 8V92 turbo was $35,000 installed. However, the mechanic, someone who had done a lot of work on the bus for us in the past, and whom we trusted completely, said that our transmission would not hold up to the torque of the newer, more powerful engine. A used transmission would have set us back another $15,000. And then we’d still have cooling issues, so figure another $3,000 to $5,000 for two new radiators and the rest of a cooling system upgrade. Sam told us “You’ll still have a 35 year old bus with a non-electronic engine, that won’t be worth much more than half of what you’ll put into it.”

For us, it was time to step up to a newer coach. We found our 2002 Winnebago Ultimate Advantage, with 33,000 miles on it, for not much more than what we would have invested in upgrading the bus. 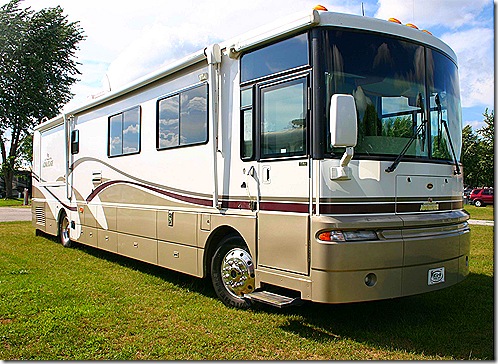 If we weren’t fulltimers, and if  I was a diesel mechanic, and if  I had the necessary tools and a place to do the work, I would have kept the bus and done the upgrades myself. But like my dad used to say, if a frog had wings, he wouldn’t bump his butt.

So when is it time to trade your old RV in? For us, it was when the basic design no longer fit our needs, and when the cost of upgrading was 3/4 of what it cost to buy a much newer, more powerful motorhome that had more room and more advantages for us than keeping the old bus did.

Now that we have been in the Winnebago for over a year, and put 10,000+ miles on it, we are convinced that we made the right decision for us. Only you can decide which choice is right for your needs, your lifestyle, and your budget.

Thought For The Day – I have never met a man so ignorant that I couldn’t learn something from him.