In spite of noisy trucks coming and going, we slept soundly at the Georgia Welcome Center, and felt refreshed when we woke up yesterday morning. Before we hit the road, we turned on our Onan Quiet Diesel generator, and while Terry brewed herself a pot of coffee, I had a bowl of cereal, checked e-mail, fixed a typo in the blog, and logged onto Dennis Hill’s and Greg White’s blogs, to see if  either had updated them since the day before. Dennis hadn’t, but Greg did, so I was batting 50% for the day. For me, that’s darned good!

We pulled out of the Welcome Center just after 9 a.m. and traveled south on Interstate 95. The highway crossed over several rivers, some as wide as small lakes, and a lot of marshland. None of the bridges were high, most were the same level as the road, so I didn’t snivel even once! 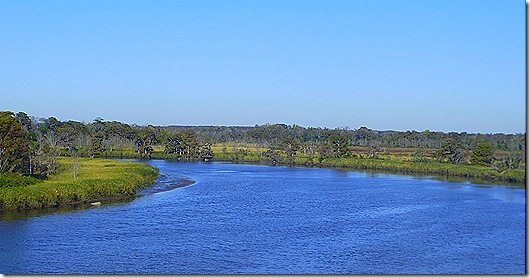 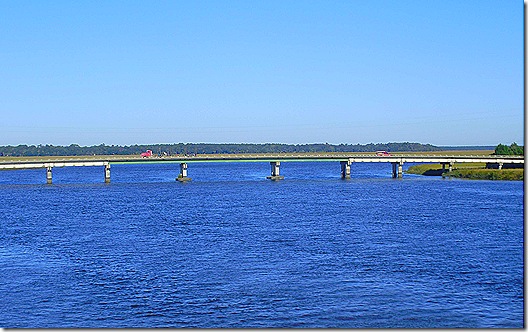 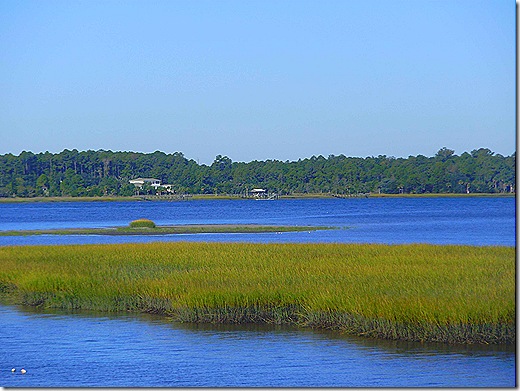 Last year when we took this route, we traveled through road construction for several miles north of Brunswick, and it doesn’t appear that they have gotten much accomplished, because we again ran into construction in the same stretch of highway.

Traffic was heavier than the day before, and by the time we crossed into Florida, it was getting really busy, and stayed busy all the way to our destination. 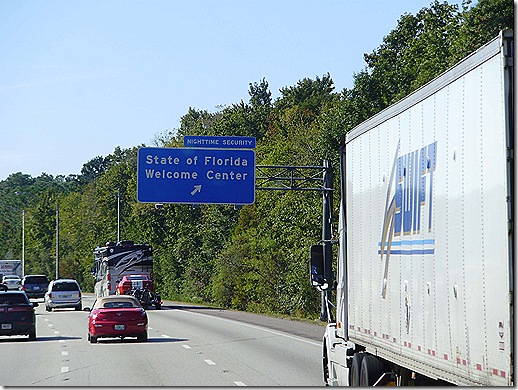 We took the I-295 loop around the east side of Jacksonville, and I still didn’t snivel, even when we crossed this bridge over the wide St. Johns River, a major waterway in this part of the world. Maybe the bridge didn’t bother me because it was four lanes wide, and we were in the third lane, and maybe because it wasn’t awfully high except in one place.  The loop adds a few miles to the trip, but it’s a lot easier than dealing with all of the traffic in Jacksonville. 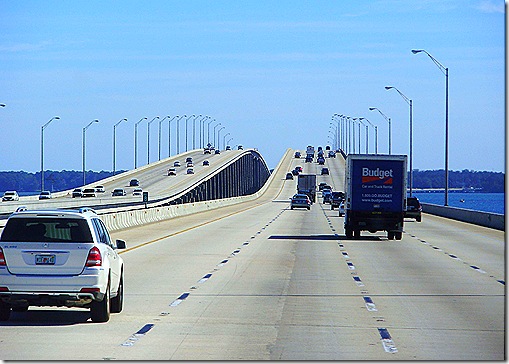 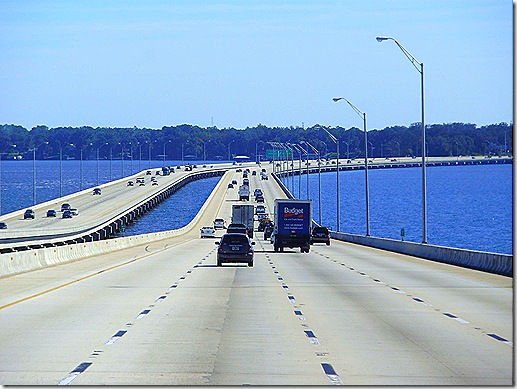 South of Saint Augustine, we pulled into the Flying J to get fuel, and our Rewards card wouldn’t work. This sign on the pump said the problem was due to “technology changes.” 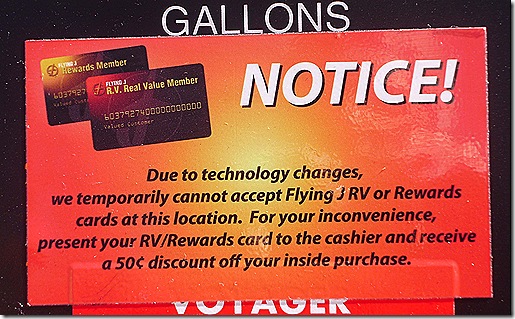 Like the Pilot the day before, the pump would only let me put $75 worth of fuel in before it cut me off, and when we tried to pay for more, the message on the screen said to see the cashier. Terry went inside, and they charged $200 to our credit card. We didn’t need $200 worth, so now they have to charge the difference back to our card. The clerk did give Terry a discount off the pump price. This is getting to be a real pain. I wonder how many forms of ID they would require if I just paid cash?

Now here is an example of the kind of RVer that makes us all look bad. 12:30 in the afternoon at Flying J, and he has his jacks down, awning out, and satellite dish up. And he wasn’t even in one of the designated RV parking spaces! Why do people do that? When it comes to losing the courtesy parking so many companies offer, we are our own worst enemy. 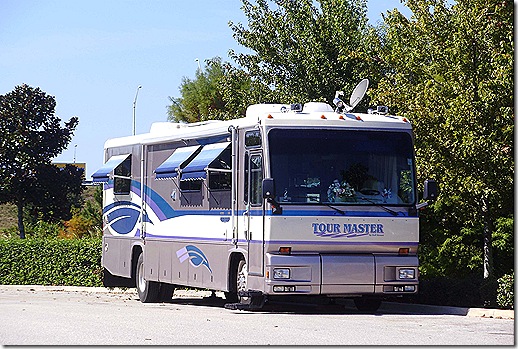 Back on the road, we arrived at The Great Outdoors in Titusville, Florida a little after 2 p.m., and got settled into the lot our friends Peter and Connie Bradish own. Soon after we arrived, Connie came by to make sure that we had arrived safely. Thanks for your hospitality, dear friend.

It was pretty hot, and by the time I had the RV hooked up and Terry had things unpacked inside, we were both tired and hungry. We ran into town and had an early dinner at Sonny’s Barbecue, a regional favorite of ours, and then it was back to the motorhome to veg out the rest of the afternoon and evening. We’ll be here a week or so, and I hope to be able to get some pictures of the space shuttle launch, which has now been delayed until Tuesday.

While I was writing this blog post, I got an e-mail from Dish Network that they have settled their pissing match with Fox, and that our FX and National Geographic channels have been restored. Yay, I can watch Sons of Anarchy again! Of course, then I got a message from a fulltiming friend who uses DirecTV, who said the company told him his monthly fee for distant networks is going up.

Thought For The Day – When we change the way we look at things, the things we look at change.

3 Responses to “We’re In Florida!”