When we arrived at the Kentucky Horse Park on Sunday the place was packed, but by yesterday it was almost a ghost town. There were probably only a half dozen or so other RVs on our entire loop.

With our business in Lexington finished, we had no reason to hang around any longer, and we were eager to get on down the road. So yesterday we left the Horse Park about mid-morning, and took Interstate 75 south for 166 miles to the Escapees Raccoon Valley campground in Heiskell, Tennessee. It was an easy trip, and took about three hours, including a stop at the Tennessee Welcome Center along the way.

In this area, the fall colors are really fantastic, and we oohed and aahed all the way. 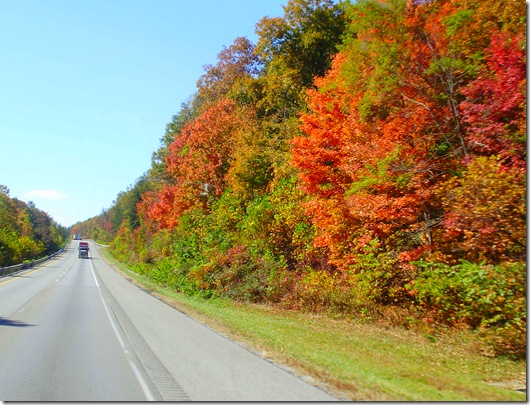 We passed some pretty farms, and Miss Terry was busy snapping pictures with her digital camera. 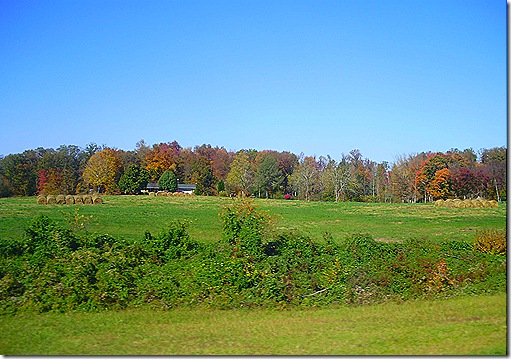 When you’re rolling down the interstate at 62 miles per hour, you really don’t want to see this in front of you! Did somebody make a wrong turn? Should we scream now? Actually, the semi tractor was being pulled backwards by another truck, going the same direction we were. 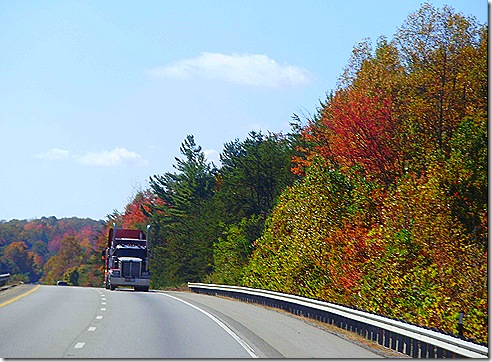 The more I drive our Winnebago Ultimate Advantage, the more I like it. Just inside of the Tennessee state line, headed south, you climb up Jellico Mountain. We have been over this stretch of roadway many times in our old MCI bus conversion, and we’d just creep our way up in the right lane at 15 to 18 miles per hour, with our radiator misters on. I gave the Winnebago some extra throttle to keep from lugging down, the 350 Cummins turbo diesel just purred right along, and we topped out at 64 miles per hour! 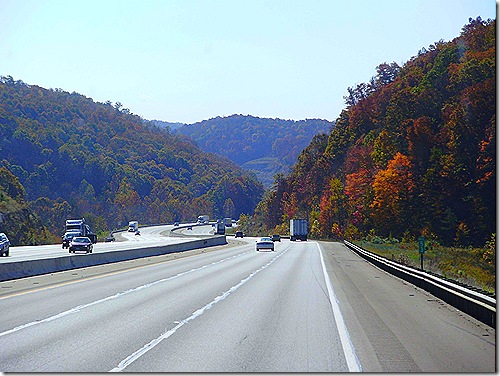 Near Clinton, Tennessee, we crossed the Clinch River, once a major source of freshwater mussels and pearls. In the late 19th and early 20th centuries, the freshwater pearl industry was a major economic factor in this region of the southern Appalachians, but the damming of rivers, including the Clinch, by the Tennessee Valley Authority to provide electrical power, destroyed the mussel and pearl trade. I’d love to kayak this river one of these days. 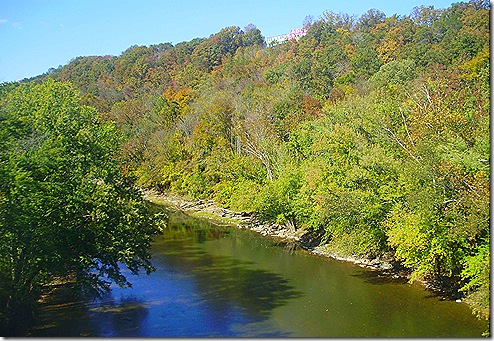 We have not been to Raccoon Valley in a couple of years, but it has always been one of our favorite Escapees RV parks. Since our last visit, they have had a major upgrade to both the clubhouse and the RV sites, and we were impressed with the improvements. 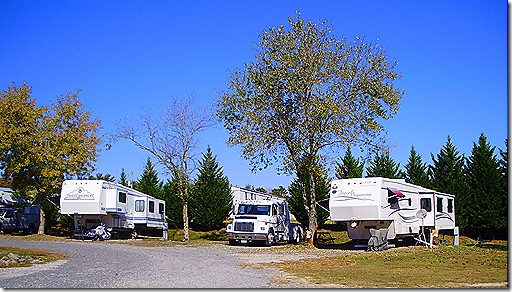 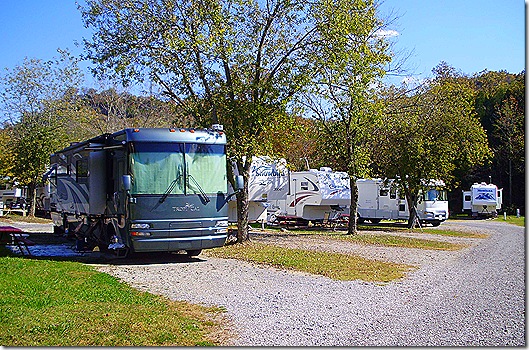 Once we got parked and settled in, we went up to the clubhouse for the daily 4 p.m. social hour, which had a nice turnout. We saw a lot of familiar faces, including Art and Caroline Fennell, Mary Gallivan, Rich and Mary Coppens, and Wayne, the campground host. There were several others, but it’s late and I’m tired, so I’m afraid some names escape me right now.

We’ll be here a few days, getting the rest of the new issue mailed out, catching up on some chores, and just enjoying time with our Escapee friends. We’re headed for Florida, but we don’t have a schedule locked in. We want to stop in the Titusville area to see our friends Pete and Connie Bradish, and Tim and Ann Moran; I have some nephews and a niece in the St. Petersburg area that I have not seen in years and whom I want to get reacquainted with; we want to spend some time with Jim and Chris Guld from Geeks on Tour, either in Fort Lauderdale, or at the Peace River NACO preserve; and no trip to Florida is complete without a stop at the Escapees Sumter Oaks campground in Bushnell. We also plan to spend some time in Key West, and paddling our kayaks in the beautiful blue green waters of the Keys.

We don’t have any place we have to be until our Arizona Gypsy Gathering rally in Yuma in March, and after having commitments all year long, we like that a lot!

Thought For The Day – Money can’t buy friends, but you can get a better class of enemy.