Nick's Blog » Putting Miles Behind Us

For some reason, neither Terry or I sleep well the night before we hit the road for someplace new. I’m not sure why that is, but Wednesday night we tossed and turned most of the night, and only got four or five hours sleep.

We were up early, and while I answered a bunch of e-mails, Terry made final preparations inside the motorhome for traveling. Then I disconnected the campground utilities, we said goodbye to some folks who came by to see us off, we hooked the van to the Blue Ox tow bar, and pulled out of Raccoon Valley about 9:45.

We took Interstate 75 south to Interstate 640, then followed that east to Interstate 40, making good time all the way, with light traffic around us. We followed Interstate 40 as it turned south into North Carolina, and were treated to some of the prettiest fall colors we could ever remember seeing. Here are some pictures Terry took along the way. 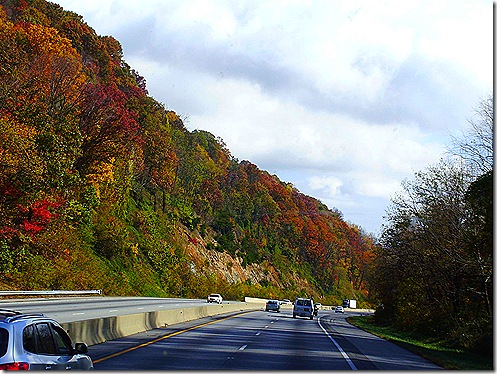 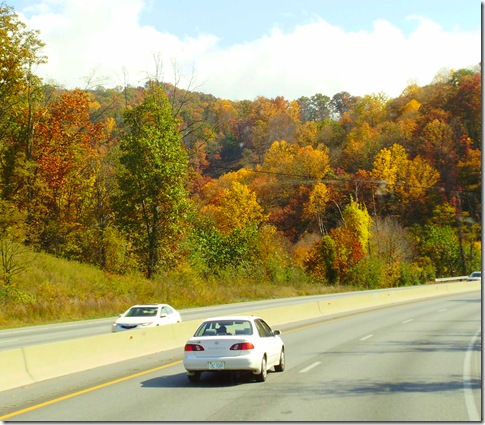 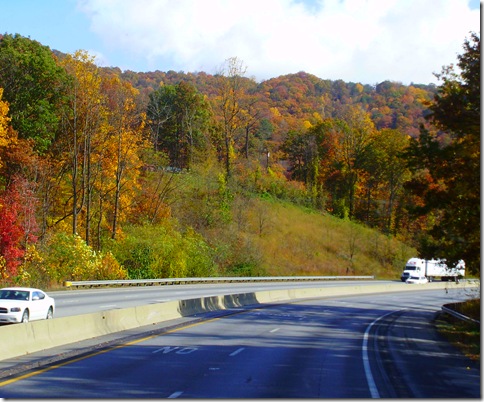 We had never been through this part of North Carolina, but we both said we’ll have to come back some time and do some exploring. It’s absolutely beautiful! 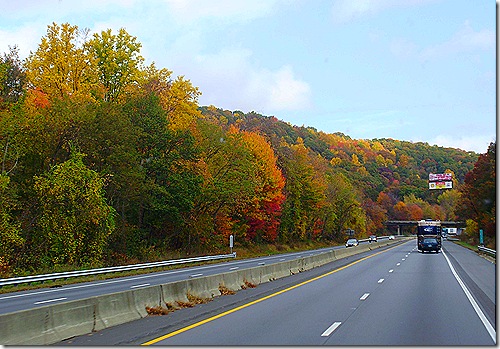 The road had a few 6 and 7 percent downgrades, and a lot of curves. In some places the truck speed was only 50 miles per hour, which usually means that the truckers blow through at 70, but not here. 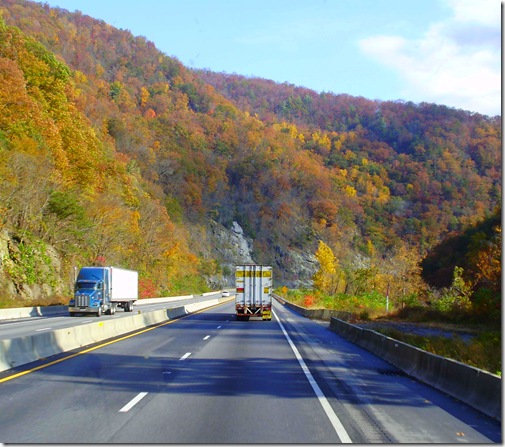 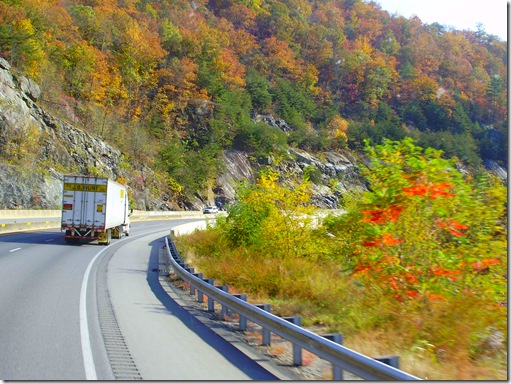 And what’s a trip without road construction, right? In several places the highway was down to one lane, but even though there was a lot of traffic, we didn’t have any delays. 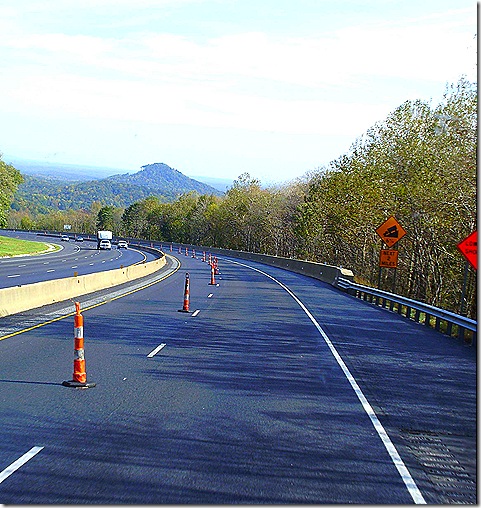 We even went through two tunnels! I don’t mind tunnels if the road lanes are wide and the traffic is not too heavy. These were no problem. 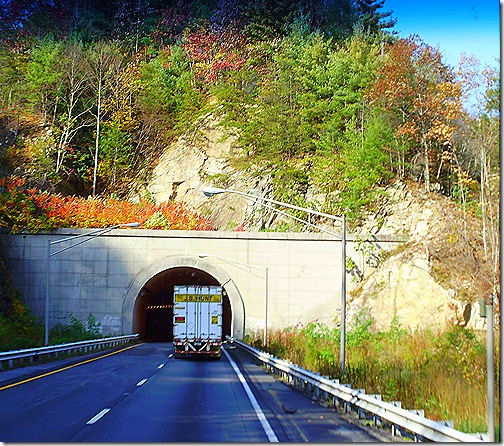 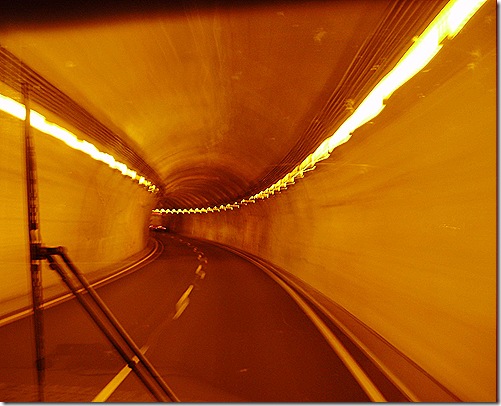 In Asheville, we picked up Interstate 26 and followed it into South Carolina. We stopped at a Pilot for fuel, and I was reminded that Pilot is my least favorite truck stop. I think the employees must all hate their jobs, because they are always surly and never smile. And what’s with having to pre-pay a selected amount? I don’t know how much fuel I’ll need, but they won’t just turn the pump on, even with Terry standing there with her credit card. We bought $200 worth of diesel, and could have put in another $25 or so, but it wasn’t worth holding up other drivers while Terry stood in line to repeat the process all over again. I wonder how much money they lose every day because other drivers feel the same as I do? I could understand if they were worried about cars driving off without paying, but eighteen wheelers and RVs are not exactly fast  “getaway” vehicles.

We had a delay at Pilot because a trucker who was either very new and/or very dumb, had swung too wide when he pulled up to a pump, and was about to hit the concrete island. So we had to wait with several trucks while he carefully backed up, then tried to pull up to a different fuel island. This time he didn’t swing far enough, and wound up with the front end of his truck wedged kind of sideways in the island, but his trailer at about a 45 degree angle to it, blocking two fuel islands.

Than he just sat there contemplating his navel or wondering why he gave up his glamorous career in the fast food industry, until the trucker in front of us finally got fed up and yelled at him to get his attention, then  guided him as he backed out again. Actually, it took two guides to get him out without tearing up the fuel island. On his third attempt he managed to get into the island straight, but he kept right on going and didn’t stop. I think he feared the wrath of several of his fellow drivers who had to sit there blocking the road while he figured out which pedal was the brake and which was the clutch. Or, maybe he never did figure out which was which and he couldn’t stop. Who knows?

Back on the road, we passed Columbia, where I spent some time at Fort Jackson as a young soldier, and then out into the countryside again. We crossed the state and hooked up with Interstate 95, turned south, and just continued to put miles behind us. It was a nice day, the driving was easy, and before we knew it we were crossing the state line into Georgia.

We pulled into the State Welcome Center about 5:30 p.m., with 414 miles behind us this driving day. We parked overnight here last year when we came through, and I went inside to see if it was still okay. I think the same lady was behind the desk this year, and she told me the same thing as before – camping overnight is not allowed. But “resting” is just fine, and the police who regularly patrol the Welcome Center encourage RVers to “rest” comfortably in their beds until they are refreshed and ready to drive again.

Yes, it was a lot of miles, and no, I’m not going to change my ways. When we’re in “get there” mode, this is what we do. I like driving my motorhome, and we don’t see any reason to stop early and sit around waiting until we’re tired enough to go to bed, if we’re just going to make a quick overnight stop. 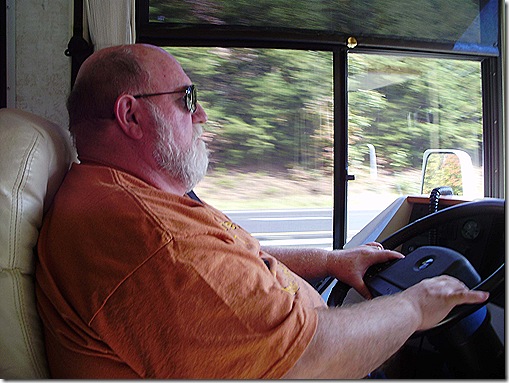 Today we’ll have an easy run of about 275 miles, and we should be in Titusville by mid-afternoon. We’re looking forward to seeing our friends Peter and Connie Bradish, Tim and Ann Moran, and Walter and Amy Cannon, who all live in the area.

Thought For The Day – It’s better to have loved and lost, than to have lived with that sick, twisted psycho one more day!

18 Responses to “Putting Miles Behind Us”