I’m beginning to feel like I have my very own personal rain cloud hanging over my head, dumping on me every time I turn around. It rained three out of the seven days we were in the Washington D.C. area, two of those days so hard that we couldn’t go out and sightsee. Now we’re at the Chesapeake Bay  Thousand Trails campground near Gloucester, Virginia, and it’s been raining since we got here. Yeah, I know, it’s good for farmers and ducks. But even though I waddle when I walk, I’m neither.

We left Cherry Hill Park in College Park, Maryland yesterday morning at 9 a.m., got on the Beltway and scooted around the west side of the Washington area with moderately light traffic. 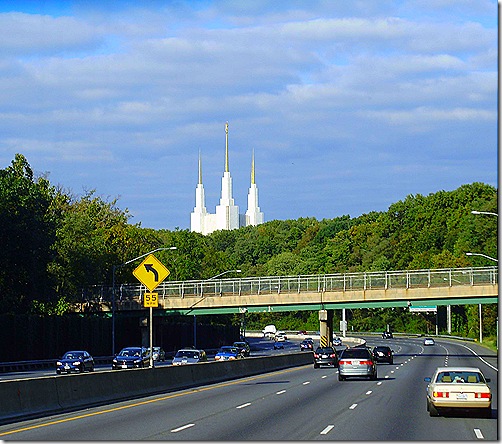 To avoid  the normal gridlock on the Beltway, we had planned to take U.S. Highway 301 south out of the D.C. area, but the more I thought about the high, narrow Harry W. Nice Memorial Bridge over the Potomac River, the more I decided that the Beltway traffic wouldn’t be all that bad on a Sunday morning. 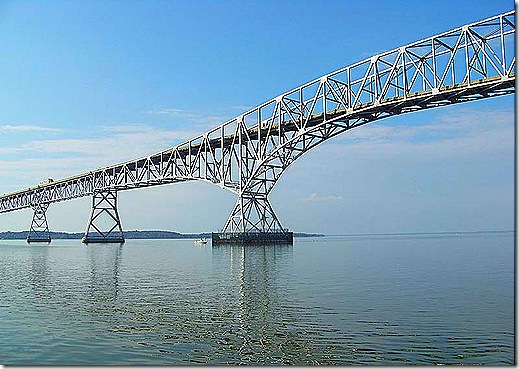 Yeah, go ahead, call me a wimp. But I drove the Mackinac Bridge a while back, so I know I can do it if I have to, but why should I, if I can take an alternative route? I kind of feel like President George Bush when he said “I’m President of the United States, and I’m not going to eat any more broccoli!” I may not be president, but I’m a demigod in my own mind, and I’m not driving over any more bridges if I can avoid them!

As I said, traffic was light, on the Beltway. There was some road construction, but nothing to slow us down. 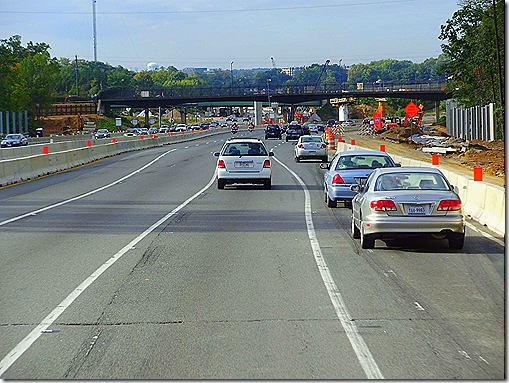 We cruised right along, and we made good time to Fredericksburg, Virginia, where we got onto U.S. Highway 17 and followed it for about 75 miles through rolling hill country, with thick forests, passing through a few small communities. For the first 25 miles or so, the road was good two lane, then it opened up to divided four lane highway. There is a lot of history in this part of the country, and we passed one historical marker after another.

It started to rain about 30 minutes before we arrived at the Thousand Trails campground, but let up long enough to allow us to get backed into a full hookup 50 amp RV site and get the rig leveled out and hooked up. Then it really began to come down, and it rained all day, and the rest of the evening.

We covered 161 miles, and were settled into our campsite by 1 p.m. I like this kind of traveling!

Unfortunately, between the rain and a tree that is partially blocking our satellite signal, the TV kept going in and out. Even in the nasty storms last week in College Park, we never lost the signal, so I think the tree is more of the problem than the rain. If it were not so wet, and if we were not already all leveled out and had the slide rooms extended, and if I wasn’t so lazy, I could have moved the motorhome a little bit, since we have a big, roomy site. I may do that once the weather clears up. However, the forecast for today is more of the same, so maybe not. I’ll check my rain cloud and see what it has to say.

Meanwhile, Bad Nick took advantage of the rainy afternoon to write a new Bad Nick Blog titled I Don’t Need Facts, My Mind’s Made Up! Check it out and leave a comment.

Thought For The Day – I used to eat a lot of natural foods until I learned that most people die of natural causes.

8 Responses to “My Personal Rain Cloud”