Yesterday was another one of those marathon driving days that RVers are not supposed to do, but that we find ourselves doing quite often. We do this sometimes when we have to get from Point A to Point B, and don’t have time to stop and play along the way. It’s not our preferred mode of travel, but what can I say? I enjoy driving my motorhome.  If it’s a good day, and the Winnebago is running smooth, and we’re having a good time, why stop until we’re tired?

We left the Chesapeake Bay Thousand Trails campground at Gloucester, Virginia a little after 9 a.m., headed west on State Route 33, crossed the York River, and got onto Interstate 64 about 25 miles outside of Richmond. Once on I-64, we pointed the nose of the coach west and just let her roll.

We had never been in this part of Virginia before, and as we climbed up into the mountains, we started to see some nice fall colors. Maybe not as dramatic as we’ve seen in northern Michigan, but pretty none the less. 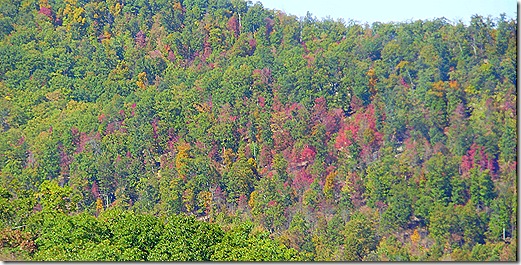 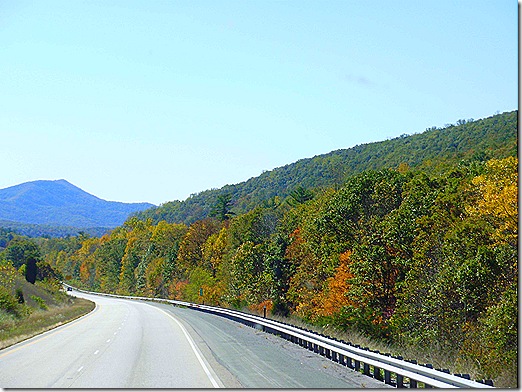 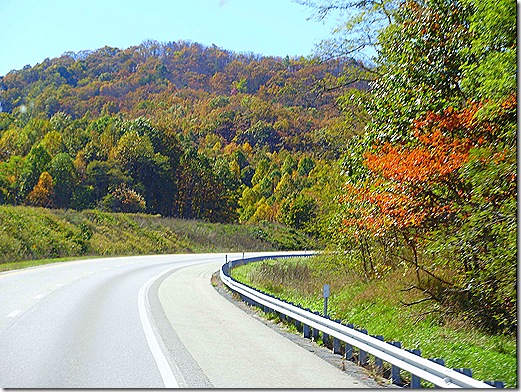 We passed several very nice little farms along the way. 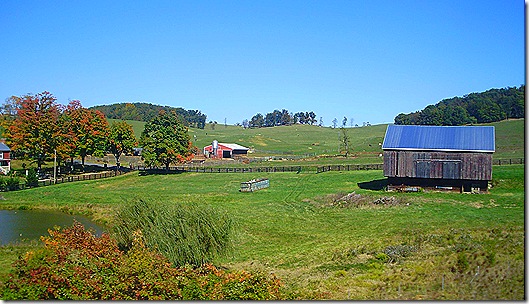 Looks like somebody needs a new roof on their barn. 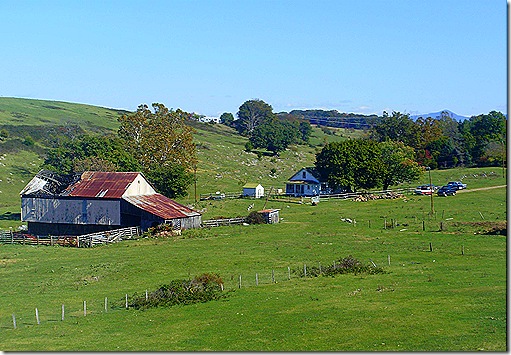 Now that’s a steep bridge! I wonder what percent that is at? I sure wouldn’t want to come down it on an icy day! 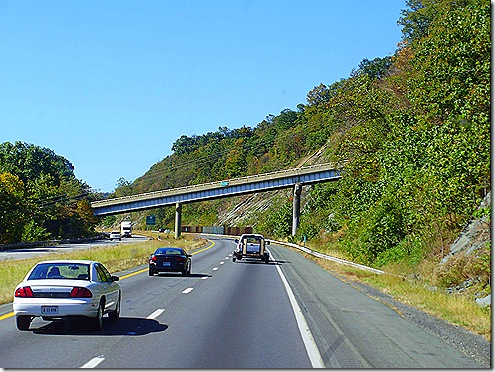 And what’s a road trip without road construction? 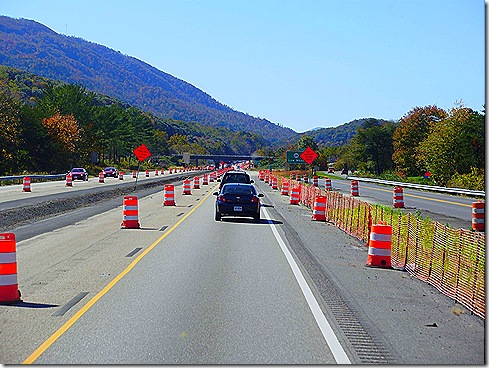 Just before we crossed into West Virginia, we had five miles of 5%  downhill grade. We crossed the state line at 2 p.m., and Miss Terry got some pictures of the rocky hillsides alongside the highway. 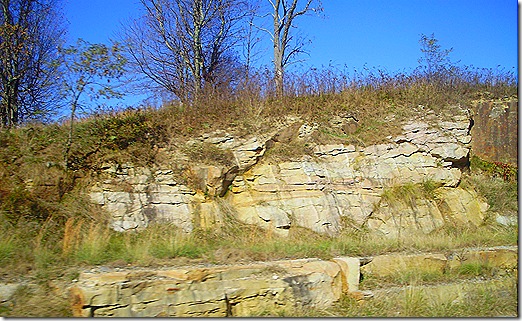 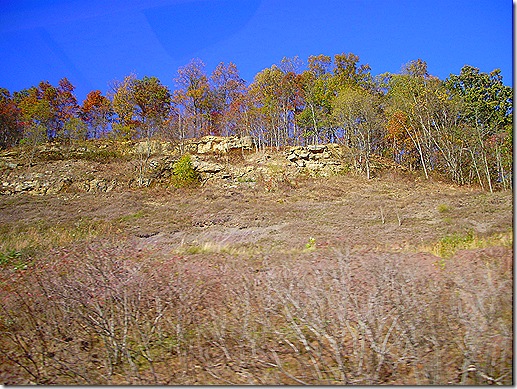 West Virginia is pretty, but it’s not a place to do a lot of rubbernecking if you’re the driver. I don’t think there’s one mile of straight highway in the entire state. It’s either uphill or downhill, and you’re always winding around the side of a mountain. 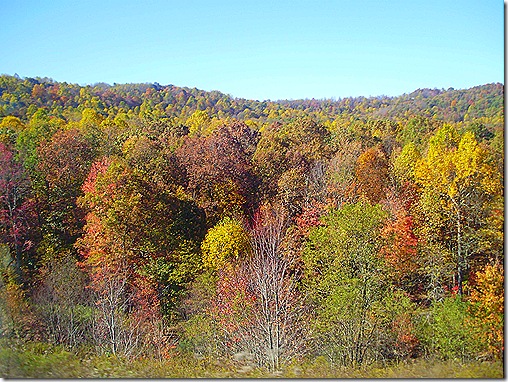 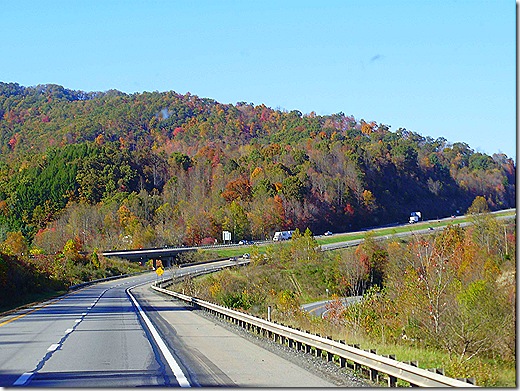 At one point, near the New River Gorge,  we had four miles of 7% downhill grade before we climbed back up the other side. 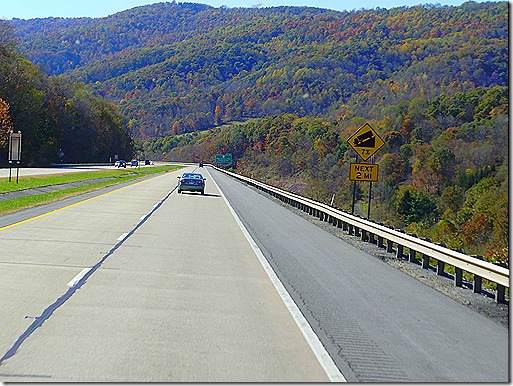 Interstate 64 joined the West Virginia Turnpike and followed it north to Charleston. Most of the way was winding roadway with a lot of potholes to keep us awake. Traffic in Charleston was light, and before we knew it we had passed the gold domed state capitol building and I-64 had turned back west again.

A little over an hour later, we crossed into Kentucky and pulled into the Flying J at Catlettsburg, a little after 5 p.m. We fueled up, and then pulled into one of their designated RV parking spaces.

We had not eaten all day and were famished, so we headed for the truck stop’s restaurant. Usually I’ll just order a burger at Flying J, but the buffet had a very good looking selection, so we both chose that instead. I’m not sure if it was because we were so hungry or what, but our dinner was outstanding. Much better than what we’ve come to expect for a truck stop buffet.

It was a long day, and I was ready to stop driving, so we spent the night at the Flying J, with 435 miles behind us. Yes, I know that’s a lot of miles for retired RVers. But we’re not retired, we’re still working folks who just happen to live the fulltime RV lifestyle as we run our business. We could had stopped sooner and had more miles to drive today, but as it is, we’re less than 120 miles from Kentucky Horse Park. So we can get in early today, get settled in, and then relax the rest of the day.

Thought For The Day – A conscience is what hurts when all your other parts feel so good.