Yesterday was a graveyard rabbit day for us.

No, we weren’t out chasing Bug Bunny through a cemetery with shotguns, but we did visit a couple of graveyards doing some hunting.

If you’re not familiar with the term “graveyard rabbit,” they are people who are interested in the historical importance of cemeteries, grave markers, and the family history to be learned from burying grounds, and tombstones. I guess that description fits us very well.

Even before I began researching my family tree a couple of years ago, Terry and I had always enjoyed exploring old cemeteries that we find in our travels. Some people think cemeteries are sad, morbid places, but we find them very interesting. If you think that your life is not so great, walk through a cemetery and read the gravestones of families who lost two, three, or four children due to infant mortality, a hundred years ago. But we also find things to smile about, such as the tombstone of a local hypochondriac in Key West, Florida that declares “I told you I was sick!”

One very useful website I have found in my genealogy research is Find A Grave, a user supported website that lists the final resting places of people dating back to the earliest days of our country. If you know that you have an ancestor who is buried in a particular cemetery, you can post a photo request, and another reader in that area will take a picture and post it online, and often e-mail you a copy as well.

I noticed that there were some photo requests for two cemeteries near the Raccoon Valley Escapes park, so we went off in search of them, to fulfill the requests. While we were out, we also photographed a lot of other older tombstones to post to the website, as a way to pay it forward to those who have helped me in my own genealogy research.

Back at the campground, we walked up to the clubhouse for the daily social hour, and had a good time visiting with the crowd there. On our way back, we noticed that one of our neighbors, Roger Post, was sitting outside doing something, so I walked over to see what he was up to. Roger told me that the was carving “wooden hillbillies.” Huh? 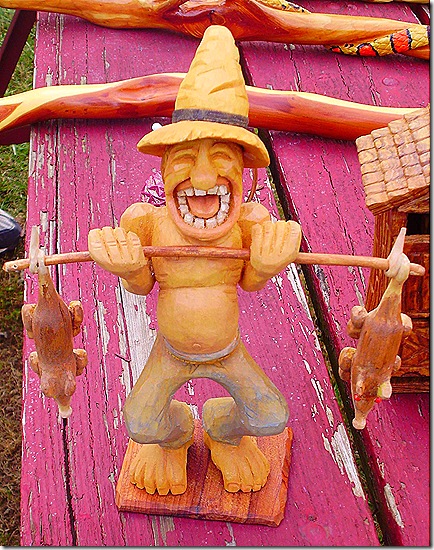 As it turns out, Roger is an accomplished woodcarver, and he showed us some of his creations. I was really impressed. This guy is a true artist! 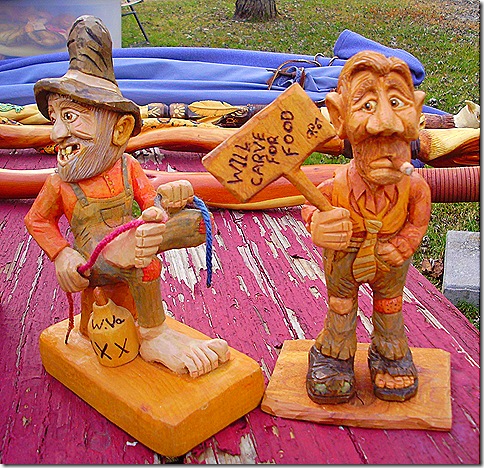 There was even a shotgun wedding! 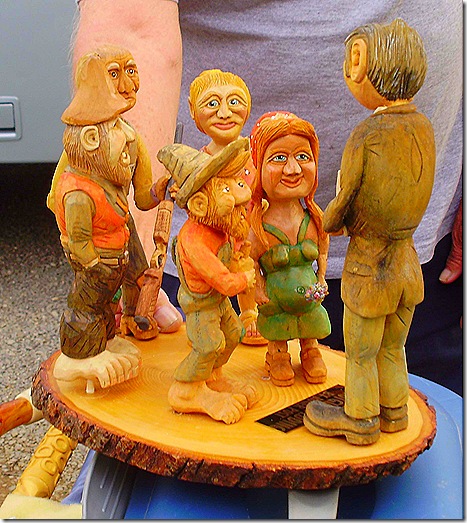 Now, I know we shouldn’t say hillbilly, the politically correct term is Appalachian Americans, but Roger told me he’s from West Virginia, and if he wants to say hillbilly, who am I to object? I’ve seen what he can do with a knife, and with Halloween coming up fast, I don’t want him mistaking me for a pumpkin and turning me into a living jack o’lantern!

Thought For The Day – How come you never see a newspaper headline saying ‘Psychic Wins Lottery’?