There is so much to see here in Gettysburg that it would take weeks to cover it all. We don’t have weeks, so yesterday we crammed as much time in playing tourist as we could.

We toured the battlefield during our previous visit a few years ago, so yesterday we spent several hours at the Visitor Center at Gettysburg National Military Park. Our first stop was the theater, where we watched the film “A New Birth of Freedom“, narrated by Morgan Freeman. It explained the reasons behind the Civil War and how our nation came to be divided.

During our previous visit, we did not see the Battle of Gettysburg Cyclorama, and now that we have, I suggest everybody include ii in their next visit here. Created in 1883, the Cyclorama is a 360° cylindrical painting that depicts some of the fiercest fighting during the Civil War battle. Visitors stand on a platform surrounded by the painting, while lights, sounds, and special effects tell the story of what happened here. It is a fabulous experience! 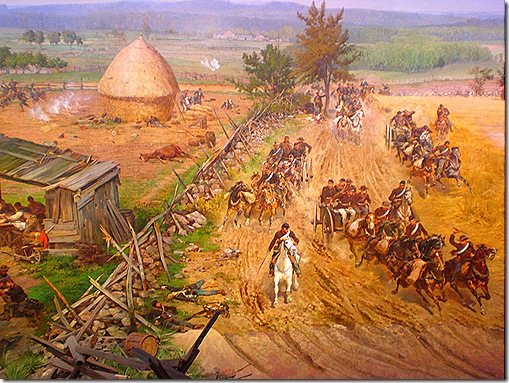 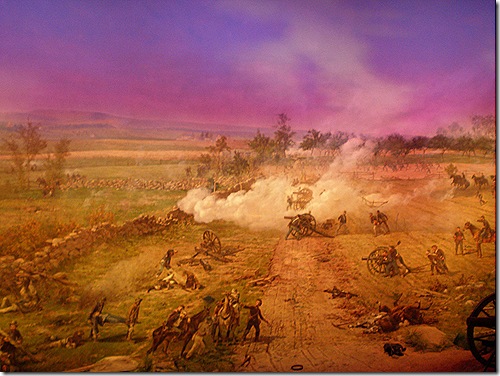 Then we toured the museum at the Visitor center, where they have an impressive collection of weapons, artifacts, and stories about the battle. I’m a gun guy, so I enjoyed seeing all of the neat old firearms. But what especially intrigued me were the stories of the men on both sides, who fought and died here, as well as those of the civilians who were caught in the crossfire, and then left to clean up the terrible destruction that followed in its wake, as they tried to rebuild their shattered town and lives. 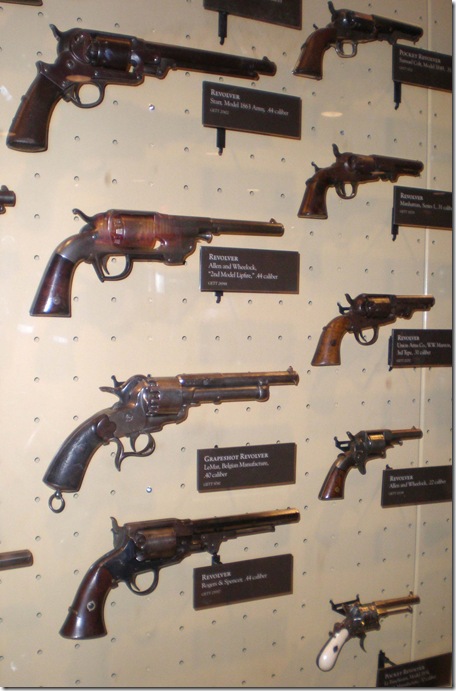 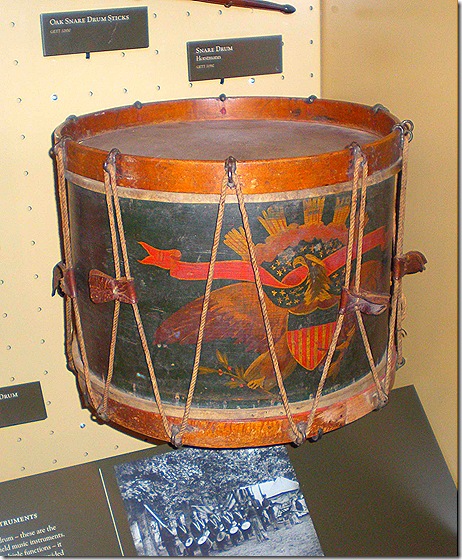 Leaving the Visitor Center, we drove out through the battlefield, where we stopped to admire several of the statues and monuments. One of the largest and best known is the Pennsylvania State Memorial, which will be 100 years old tomorrow. The monument displays the names of over 34,000 Union Army soldiers who were at Gettysburg. Stars beside the names honor those who were killed in the fighting. 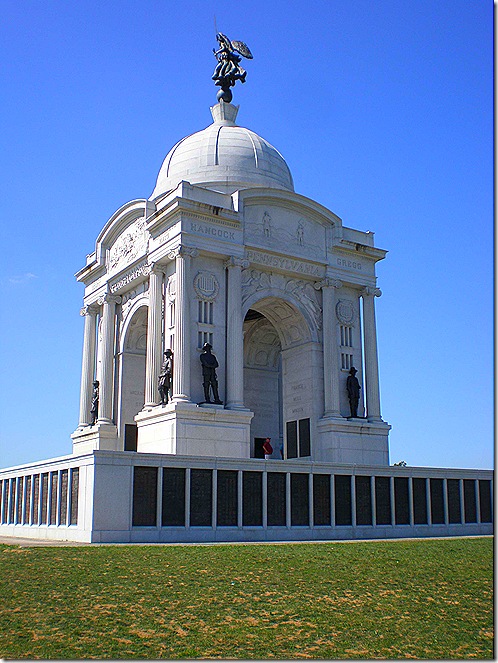 This statue honors the 8th Pennsylvania Cavalry, which served with distinction during the battle. 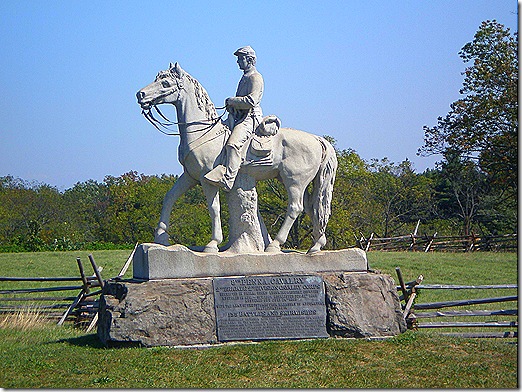 This monument honors the 1st Minnesota Infantry. During the worst of the battle, they were ordered to stop the flood of Confederates pouring through a gap in the Union lines. Outnumbered 4 to 1, they made a desperate bayonet charge into the face of the enemy, and managed to stall their advance long enough for reinforcements to arrive and fill the hole in the Union defenses. The regiment paid a horrific price; out of the 262 men who made the charge, only 47 escaped death or injury. 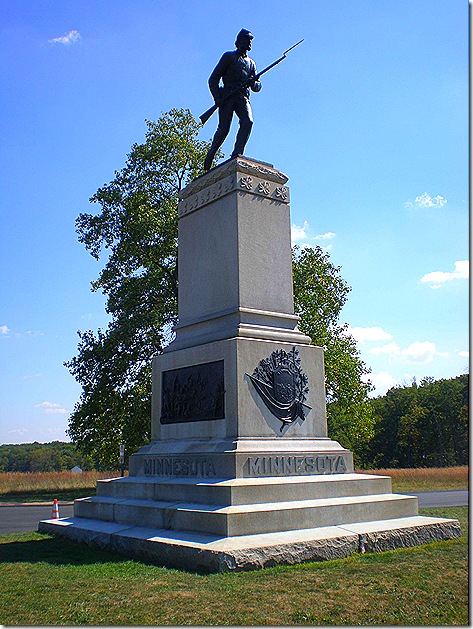 Driving into town, we spent some time wandering down the sidewalks, just soaking up all of the history like a couple of sponges. This is a very special place to me, and I just feel a strong attraction to the old homes, the narrow streets, and the surrounding countryside. 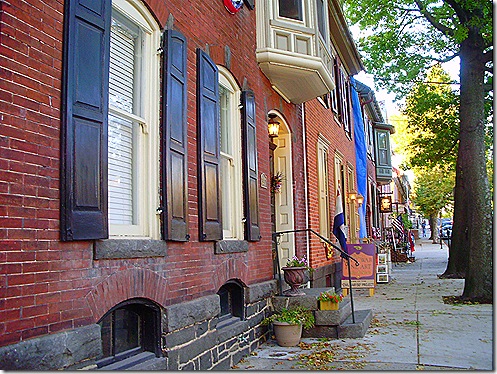 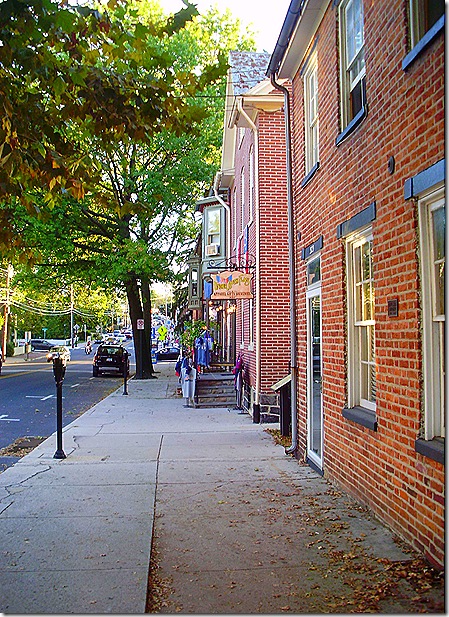 Then we drove out to Sach’s Bridge, through which much of the Confederate Army retreated after the battle. Many claim that the bridge is one of the most haunted places in America. I’ll have a feature story on the bridge in the next issue of the Gypsy Journal. 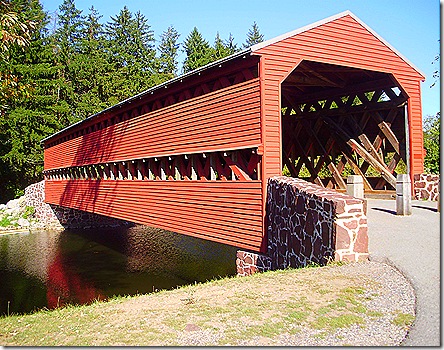 For a panoramic view of the battlefield and surrounding countryside, Miss Terry climbed this observation tower, which has 111 steps to the top. She got some great pictures, but I stayed down on the ground, waiting to catch her if she decided to jump! 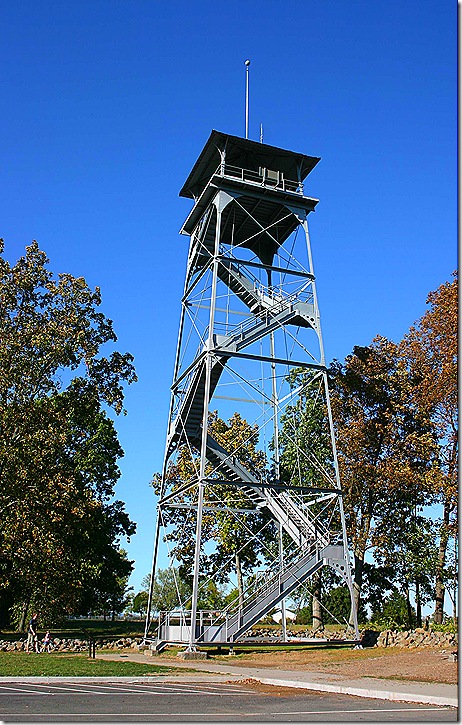 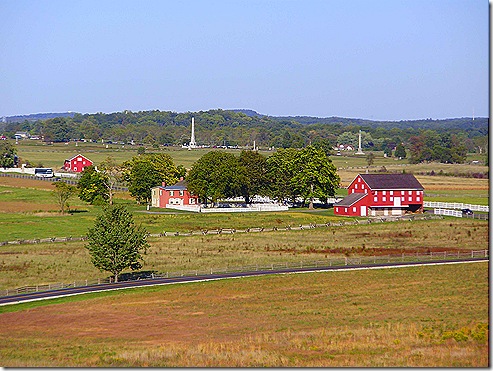 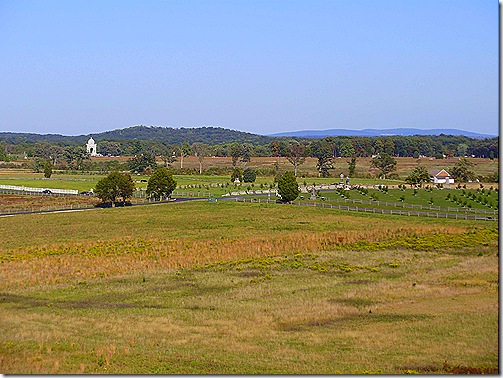 Back at Round Top Campground, we spent some time visiting with manager Carrie Freeman, and I never pass up an opportunity to take a picture of two pretty ladies at one time. Carrie is a fun person, and a bundle of energy, and we really have enjoyed getting to know her a little better. If you are planning a trip to Gettysburg, Round Top Campground is a great base to explore everything the area has to offer. 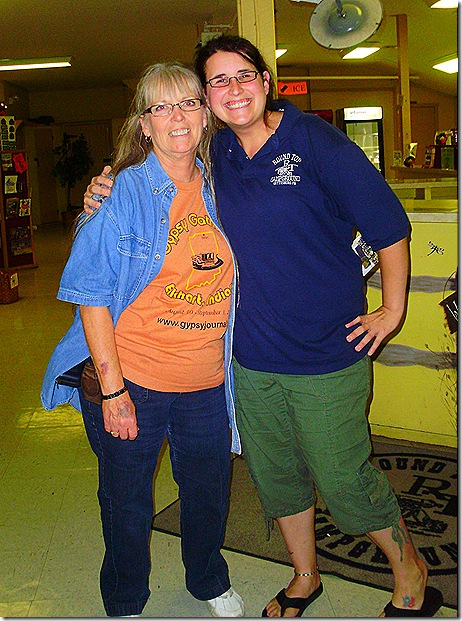 As much as we have enjoyed our brief visit to Gettysburg, today we have to leave. We have reservations at Cherry Hill Park in College Park, Maryland, and we’ll spend a week there exploring Washington, D.C. and seeing all that we can in our time there.

Bad Nick doesn’t play well with others, so while we were out touring, he stayed home and wrote a new Bad Nick Blog titled Just Clean Up The Mess! Check it out and leave a comment.

Thought For The Day – Money can’t buy happiness but it sure makes misery easier to live with.

3 Responses to “Playing Tourist In Gettysburg”