Nick's Blog » Not Exactly As Planned

We only have a couple of days here in Gettysburg, and we had planned to spend yesterday playing tourist. There is so much to see and do here that we could never cover it all, but we had hoped to at least get to the new National Parks Visitor Center. But things didn’t go exactly as planned.

Miss Terry has not been feeling 100% since we spent 11 hours a day standing on the ice rink at the Hershey RV Show last week, and whatever has been hanging around in the background came to the forefront yesterday.  She woke up feeling pretty puny, with a sore throat, headache, congestion, and generally achy all over. So we decided that a quiet day at home might help her get to feeling better.

Of course, you can’t get Terry to take it easy, so for her a “quiet day at home” involved hours wading through the paperwork from our recent Elkhart rally and the Hershey show, and doing a couple of loads of laundry.  I spent most of the day working online, answering e-mails, and contacting vendors and potential entertainers for our Arizona Gypsy Gathering Rally, which will be March 7-11, 2011 in Yuma. I’m hoping David Bradley, who was a hit at this year’s rally, will come back and put on another show for us.

Also, due to popular demand, we’re bringing our Cactus Queen Beauty Contest back. We skipped it last year, because we thought that people might be getting tired of it, but a lot of folks let us know that they missed it. Besides, it’s just so darned much fun!

For some reason, the links on the Rally Registration Page were not working, so I fixed that problem, and now you should be able to just click the link and register. A lot of the vendors who were at the rally this year have already told us that they want to come back, because they had such good sales. And we’re looking forward to having them back, with all kinds of bargains for our rally attendees.

By late afternoon, Terry was feeling a bit better, so we drove into town and looked at some of the neat old houses and storefronts. I first visited Gettysburg back when I was in the Army, and fell in love with all of the history and charm of the famous old town and the surrounding area. If I was ever willing to get off the road (which I hope never to do), and if I had to live in a place where it snows (which I definitely hope never to do), I could live here.

Maybe I watched too many old movies growing up, but I love fedora hats, and all of my life, I have always wanted a good one. Wandering around Gettysburg, we found a neat little shop called Wilderness Lodge Leather & Hat Shops, where they had a fantastic selection at excellent prices. Such a good selection at such good prices that by the time we left, I had three new hats, two felt and a nice Panama straw! 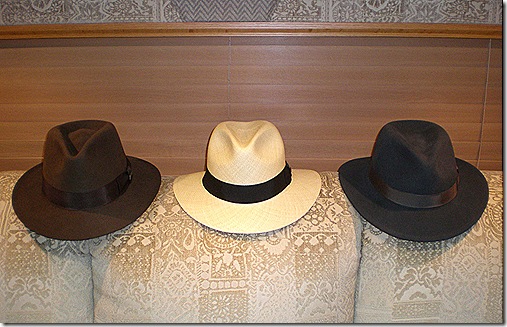 What does a guy who lives in a motorhome need with three hats, when he already has an excellent medium brim Stetson? Miss Terry says it’s because I work hard and I don’t drink, smoke, play golf, or blow money in a lot of other ways, and I deserve them. And who am I to disagree with her?

Gayle Underwood, who was on duty behind the counter, is a history nut; a retired history teacher, and a wealth of information about Gettysburg. We spent quite a bit of time talking with her, and she gave us a lot of tips about places to see and things to do.

By then we were both hungry, and Gayle recommended  O’Rorkes Eatery & Spirits, almost across the street. Jerry, one of our regular blog readers, had also recommended O’Rorkes, so we walked across the street and tried it out. They were busy and there was a 20 minute wait for a table inside, but the hostess said we could get an outside table right then. It was a pleasant, warm evening, so we said okay, and enjoyed watching all of the tourists passing by as we had a fabulous meal.

Here is Miss Terry looking over the menu, which ranged from seafood to steaks and prime rib. She chose the salmon, and I had a New York strip, and both were delicious. 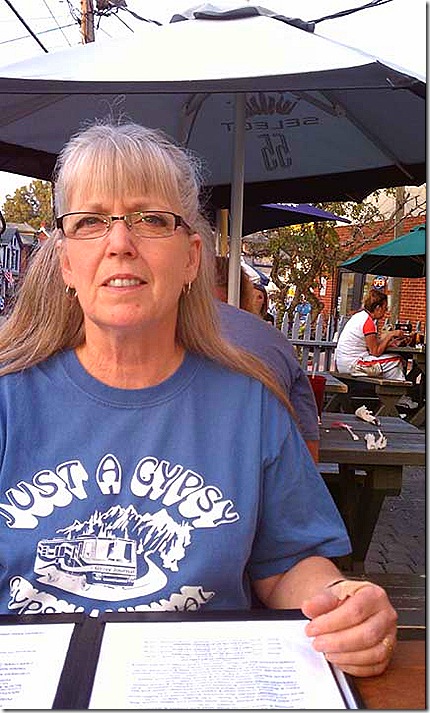 Then we drove out through part of the old battlefield, just to see how it felt in the dark, under a full yellow moon. It was a lot more peaceful than it was here in  July of 1863, for sure!

Thought For The Day –  It’s the small daily happenings that make life so spectacular.

9 Responses to “Not Exactly As Planned”