Nick's Blog » You Get What You Pay For

Back when we were doing the bus conversion thing, we knew several bus nuts who took their coaches to Mexico to have them painted. We never considered it, because even at bargain Mexican prices, we just didn’t feel comfortable taking our MCI into Mexico.

Yes, I know that a lot of RVers, even some of my blog readers, enjoy traveling in Mexico. and sing its praises. That’s fine for them, but it’s not our thing. I’ve seen some Mexican paint jobs that looked pretty good, but I’ve seen some really botched ones too.

But I don’t think I’ve ever seen one this bad until yesterday, when we stopped in to visit with Michele Henry at Phoenix Commercial Paint. Michele told us that this Country Coach was painted in Mexico, and by the time its owner was back across the border, the paint was blistering and peeling on the bumper. 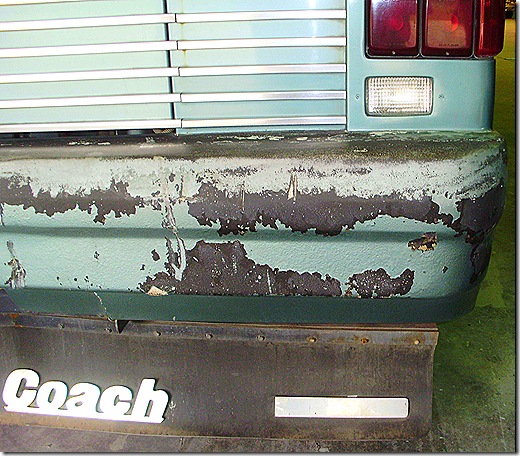 Soon afterward, the gel coat on the rear cap started bleeding through. All because of a lack of good preparation before they started painting, and shoddy workmanship. 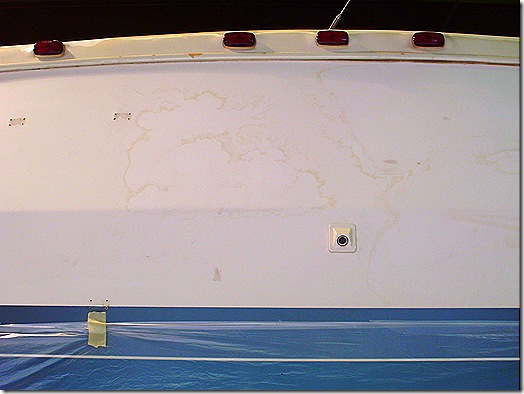 So yes, the owner saved some money by going south of the border to get his coach painted. But like most things in life, you get what you pay for. With the great work Michele and her crew do, for so much less than what other shops charge, I don’t know why anyone would drive all the way to Mexico and take a chance on getting  a paint job like this instead.

Here is one of Michele’s employees buffing a motorhome she is finishing up on. Now that’s a good looking paint job! We keep saving our pennies, and one of these days we may be able to have Michele work her magic on our Winnebago Ultimate Advantage. 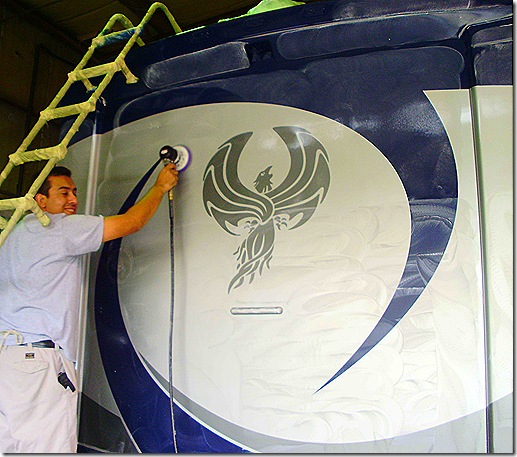 Yesterday we dropped off the new issue of the Gypsy Journal at our printer in Allegan, Michigan, and since Greg and Jan White had never been up in that area, they went with us. Jan really liked all of the pretty country scenery and small towns we passed through along the way.

When we left the printer, we drove to Portage, Michigan to have lunch, and browsed in a couple of stores; Gander Mountain for Greg and I, Bed, Bath and Beyond for Miss Terry and Jan, and Barnes and Noble for all of us.

Back at Elkhart Campground, I caught up on e-mail, and checked some of the RV blogs I try to read on a regular basis, then went for a walk around the campground. Or at least I tried to go for a walk.

First I noticed a couple trying to get a small refrigerator into their fifth wheel, and I stopped to give them a hand. Once we had it inside, I resumed my walk, and was stopped by a couple who wanted to talk about their frustrating attempts to have the husband teach the wife how to drive their RV. They both agreed that it wasn’t working, and I strongly suggested that they go talk to Dennis Hill from the RV Driving School. Some couples just don’t seem to be able to work together on things like that, and though the husband didn’t want to spend the money on a driving lesson (which is a great investment, in my opinion), I told him that it was a lot cheaper than a divorce!

I didn’t make it far before another couple called me over to their awning to ask about the seminars at our Eastern Gypsy Gathering rally. They didn’t have internet access to check the schedule at the bottom of the Rally Registration Page on our website, so I tried to remember all of the seminars we have scheduled. But with some 60 different seminars, I couldn’t remember each and every one. They wanted to know about as many as I could remember off the top of my head, and they asked a lot of questions about several of the seminars. I told them that I’d have the finished schedules printed up ahead of time, so they would have time to decide which ones they wanted to attend. Then the husband said, “Oh, we won’t be here. We’re headed for Pennsylvania in a couple of days, and then we’re going to New England to watch the leaves changing. We just wanted to know what we’d be missing.” Huh? I’m straining my brain and slapping bloodthirsty skeeters just so they could do some mental window shopping? I bit my tongue, and wished them a safe trip.

We’ve got a lot to do in the next few days, including picking up the new issue from the printer on Thursday, stuffing all of the envelopes and getting them mailed off,  proofing the design for the rally T-shirts, deciding on the layout of the vendor building, and a lot more. And I’ll probably need a nap or two somewhere along the way!

Thought For The Day – If you think there is good in everybody, you haven’t met everybody.

7 Responses to “You Get What You Pay For”