In our many years on the road, we have met a lot of people who travel with pets. Most have been your run of the mill dogs and cats, with an occasional oddity thrown in, like one couple we met who fulltime with two Amazon parrots. We have also heard of RVers who travel with ferrets, and even a snake or two. I try to avoid anybody who considers a snake a pet.

I’m not a cat person, and when it comes to dogs, I prefer the medium to large sized breeds. Unfortunately, many RVers tend to go with the smaller breeds, which is understandable, given the limited space inside of an RV.  I don’t mind little dogs, though I absolutely detest yappy little dogs.

I joke about not liking French poodles, though my pals Jim and Chris Guld from Geeks on Tour actually have a poodle that I have been known to scratch behind the ears, when nobody is looking. But Odie isn’t your typical obnoxious poodle, and he ignores me most of the time, which I respect, given the comments I have made about many of his cousins in the past.

Yesterday I think I met the strangest animal I have ever come across in an RV park; Randy, the traveling tortoise. Jay and Gwen McMichael are parked a few sites down from us here at Fisherman’s Landing in Muskegon, Michigan, killing time before they go down to Elkhart for our Eastern Gypsy Gathering rally the end of this month. I wandered down to chat with them yesterday morning, and they introduced me to their African Leopard Tortoise, Randy. 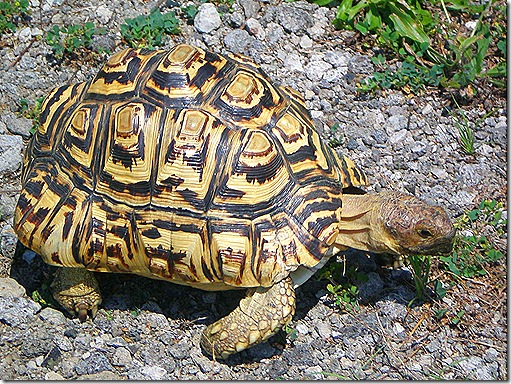 He was busy munching on grass under a picnic table, and when Jay picked him up to show him to me, I swear the critter actually had a personality! Instead of withdrawing into his shell like most turtles I have ever seen, Randy was happy to have his head rubbed. 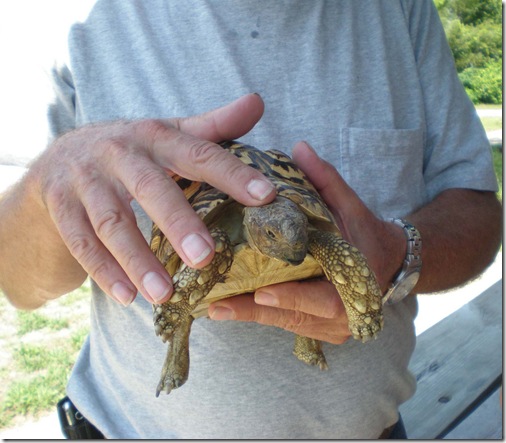 Jay said he got Randy when he wasn’t much more than a hatchling, and that he makes a great pet, because he doesn’t bark, doesn’t shed, doesn’t claw the furniture, and is very low maintenance overall. Randy lives in the shower stall of their Pace Arrow motorhome, and seems to be very happy in his role as probably the world’s only RVing tortoise. 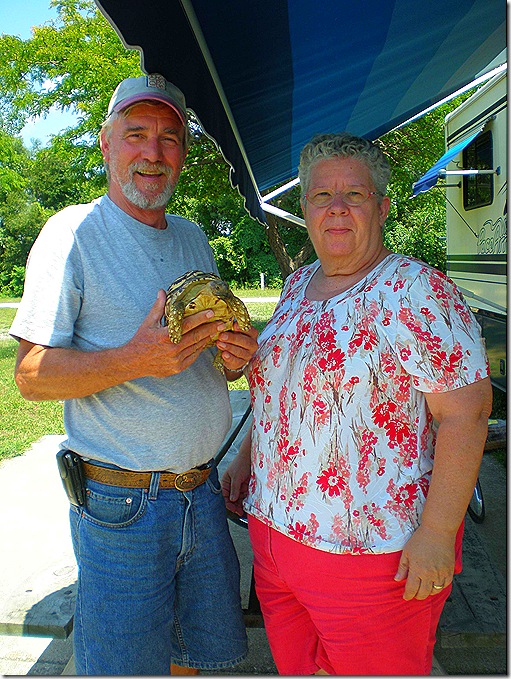 So what’s the difference between a tortoise and a turtle, you ask? Well, a tortoise is a kind of a turtle, but not all turtles are tortoises. Turtles have flatter backs than tortoises, they can swim well, and different types may spend all or part of their lives underwater. Turtles are often omnivorous, eating plants, insects, and fish.

In the natural world, tortoises live entirely above water, only going into water to drink. They are not good swimmers, and often drown if caught in deep water or swift currents. Tortoises are mostly herbivorous, eating cactus, shrubs, and other plants that have a lot of moisture. Their shell forms a rounded dome, allowing the tortoise’s limbs and head to withdraw for protection. Okay, end of biology lesson. 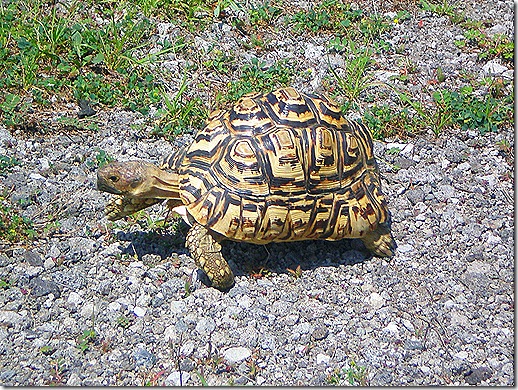 I’m glad I met Randy. He’s a pretty cool creature, and as reptiles go, he’s a lot more socially acceptable than a snake, or even a lizard. But tortoises don’t have ears to scratch behind, and when a tortoise wags his tail at you, it just isn’t the same as a friendly mutt doing the same thing. On the other hand, in all the time I was visiting with Jay and Gwen, I never heard him yap or bark!

I guess if you’re going to travel with your house, having a pet that travels with his own house too kind of makes sense, doesn’t it? What are some of the stranger pets you have seen in RV parks?

Bad Nick doesn’t like any critter that weighs less than 50 pounds, or won’t occasionally give his hand a friendly lick. So while I was out meeting Randy, he stayed home yesterday to post a new Bad Nick Blog titled The Lesser of Two Evils. Check it out and leave a comment.

12 Responses to “Randy, The Traveling Tortoise”