Nick's Blog » On To Elkhart

Proving just how hard it is to break a bad habit once it gets established, I was awake by 7 a.m. yesterday morning. That’s about four hours after the time I normally get to bed. This really has to stop!

The weather report had called for scattered thunderstorms in western Michigan, and soon after I woke up, strong winds began to rock the motorhome, followed by rain.

Now we had a decision to make. Do we go ahead with our plan to drive to Elkhart, Indiana, hoping we can find a window of good weather to travel in, or do we sit tight at Fisherman’s Landing Campground in Muskegon?

Normally, we would stay put and avoid traveling in bad weather. But the storm passed by in a few minutes, and the weather report called for more of the same for all of this week. Add to that the fact that our power had been kicking off every few minutes at the campground since the night before, even though we had turned off the TV and Dish network receiver, switched our water heater and refrigerator to propane, turned off our air conditioning, shut down our computers and wireless router, and set the battery charge rate on our inverter to just 5 amps. It doesn’t do you any good to have a 30 amp RV site if the campground is crowded, their power is crappy, and everybody else is running everything they have.

We didn’t feel like paying another $25 to dry camp, and with temperatures in the mid-80s, it wouldn’t have been very comfortable anyway. So a little after 9 a.m. we pulled out, stopped at a Bob Evans Restaurant to meet Berni and Rocky for breakfast and a last goodbye, and then headed south on U.S. Highway 31.

Fortunately, we got a break in the weather, and except for a few sprinkles, we had a nice trip. Well, except for the road construction.

Michigan has two seasons; winter and road construction, and we’re smack dab in the middle of the latter. We hit a couple of construction zones on our trip south. I’ve never understood drivers who come into a construction zone and ignore signs telling them to merge right or left, instead speeding forward until the every last minute, then trying to muscle their way in. All they do is create a bottleneck and make things harder for everybody, themselves included. Just get over as soon as you see the signs and keep on rolling. At least until you have to slam on the brakes to keep from running over the idiot trying to wedge in ahead ahead of you, who didn’t. 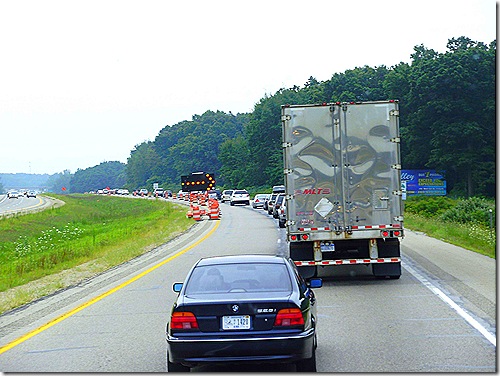 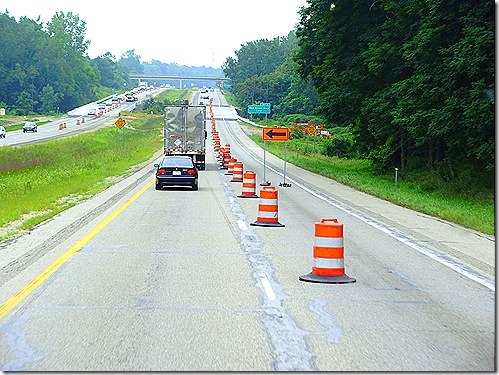 We pulled into Elkhart Campground a few minutes before 2 p.m., and the place is packed! A lot of folks are here early, just hanging out before our Eastern Gypsy Gathering rally. 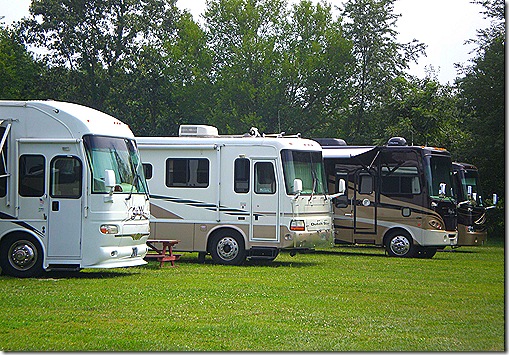 By the time we got unhooked, Greg and Jan White had come out to greet us, Jan with a batch of freshly baked cookies in her hand. What a beautiful sight! A pretty lady with a handful of goodies beats the heck out of an angry woman with a revolver, a rolling pin, or a restraining order. Trust me on this!  Several other folks came by to say hello as we were getting set up, but I was busy and didn’t get everybody’s name.

Bob and Gita Patel, owners of Elkhart Campground, have really been busy this summer, adding a lot of new 50 amp full hookup sites, and upgrading older sites. If you’re a regular here and haven’t seen all of the improvements yet, I know you’ll be impressed. 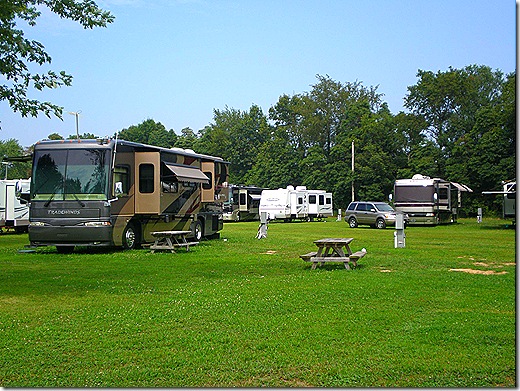 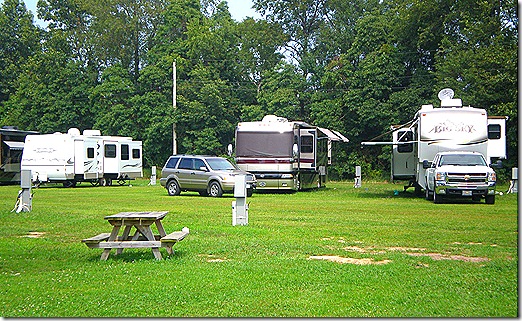 Here is our Winnebago on the right, and Greg and Jan’s American Eagle on the left. Don’t you just love a spacious RV site? 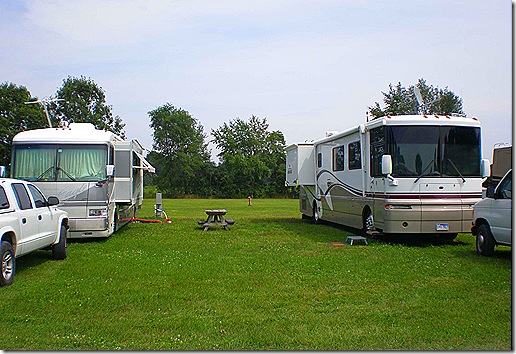 Once we were all settled in, and had time to check our e-mails and rest up a while, we went to dinner at Famous Dave’s BBQ in Mishawaka with Greg and Jan. We like Famous Dave’s because they serve huge portions, and everything on the menu is delicious. We always have fun with Greg and Jan, and the time went by fast as we talked about the upcoming birth of their second grandchild, about our mutual RV travels, and anything else that came to mind.

Back at the RV park, we visited for a while more, and then Greg and Jan called it a night. Soon after they left, Frank and Marlene Hinman stopped in to say hello and welcome us to Elkhart. We love visiting with our friends wherever we may be!

Another couple of wonderful friends of ours, Jerry and Suzy LeRoy, just celebrated their 50th wedding anniversary, and are spending the summer on their lot at the Escapees co-op in Benson, Arizona. This is monsoon season in Arizona, which was always my favorite time of year when I lived there.  Jerry has some awesome photos of the dramatic cloud formations that fill the sky during monsoon season in their blog. Check them out, I think you’ll be impressed.

Thought For The Day – I just got lost in thought. It was unfamiliar territory.

13 Responses to “On To Elkhart”