Whether we’re in our motorhome or our van, whenever time allows, we always prefer to travel the two lane back roads wherever we are going. A Denny’s or a Flying J truck stop are pretty much the same, whether they are at an interstate highway exit in Arizona or Tennessee.

But on the back roads you see the real America; the small towns, the neat farmsteads, the old courthouses with their Civil War statues, the fields of corn, and the roadside produce stands. You can’t travel as fast on the back roads as you can on the super highways, but why would you want to, anyway? There’s too much to see along the way.

Yesterday we drove back up to Allegan, Michigan to pick up the new issue of the Gypsy Journal from our printer. Our route took us up State Route 40, through the small towns of Marcellus, with its handsome old houses and storefronts; and Lawton, where the beautiful old stone railroad depot is now home to an American Legion post. 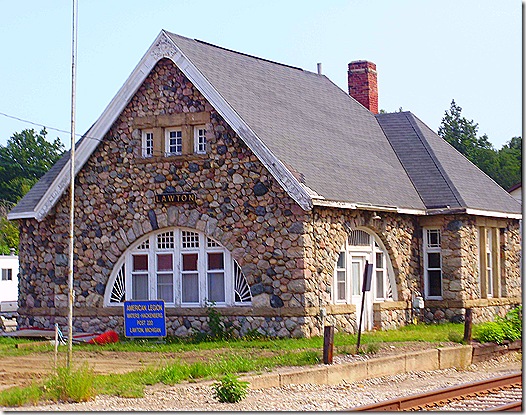 We passed a lot of farm fields, those roadside produce stands I mentioned above, and several lakes. I’d like to get our kayaks wet up here, and I bet there is some good fishing in these waters too! 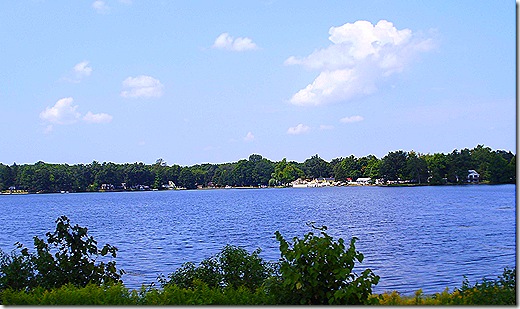 I always like driving through the busy little town of Paw Paw, just for the name if nothing else. Paw Paw is the home of the St. Julian Winery, which offers free tours and wine tasting. 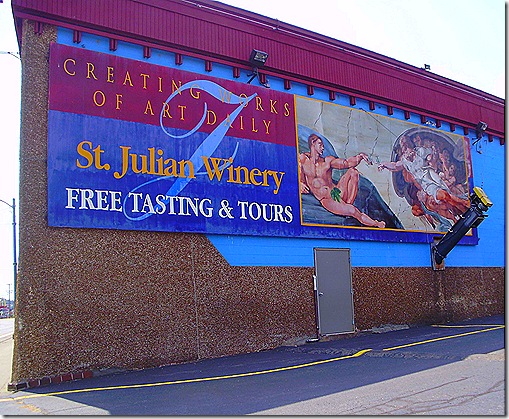 The Paw Paw Police (as opposed to the cantaloupe cops), have a neat old 1950s-era police car that we had hoped to get a picture of, but it wasn’t in its usual parking place, so we’ll have to try again one of these days.

We enjoyed the ride up to Allegan so much that, once we loaded the new issue into the van, we drove right back to Elkhart along the same route. (Of course, it’s the shortest and easiest route, so that helped too.

How would you like to spend the morning driving through all that pretty scenery I just showed you, and come back to find this parked next to you? No, the Beverly Hillbillies didn’t get a motorhome and hit the road, that’s my buddy Greg White’s American Eagle. Greg managed to scrape up his bay doors on a boulder or a panhandler, I forget which, so he took them off and our pal Michele Henry at Phoenix Commercial Paint is fixing them like new again. In the meantime, I just had to pick on Greg, because you know what they say, you can take the redneck out of the trailer park, but you can’t take the trailer park out of the redneck. 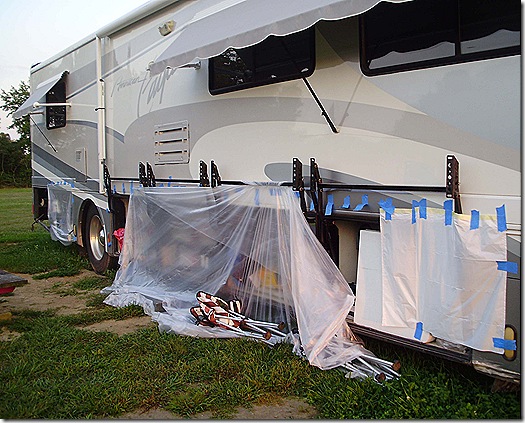 I was feeling a bit droopy by the time we got back to Elkhart Campground, so I laid down for a little nap, and woke up when my friend Orv Hazelton called to tell me he and his lovely wife Nancy had arrived and were parked next to us. We went over to check our their beautiful new Allegro four-slide diesel pusher, I fussed over their little mutt Duffy, who is almost acceptable for a wannabe dog, and then the four of us went out to dinner. We haven’t seen Orv and Nancy in quite a while, and it was nice to have some time to visit and catch up.

When we got back to the campground, I wanted to take a little walk, and then go inside and get caught up on e-mail from the day. But before I could, a series of folks stopped by to introduce themselves, say hello, ask about the rally, and to  talk about my Bad Nick Blog posts. I’m afraid I can’t remember everybody’s name, but they included Phyllis Schell,  and subscribers Gary and Elaine Regelman. My apologies to those whose names I missed, but my brain capacity is a bit exceeded right now.

I finally managed to get in a couple of laps around the campground, stopped to visit with some folks along the way, and got back to the Winnebago in time to check out the new series Hardcore Pawn on True TV. We managed about 20 minutes of the half hour episode and changed channels. It’s obviously an attempt to cash in on the popularity of A&E’s Pawn Stars, but we both felt that it pretty much sucked. We won’t waste any time on it.

Thought For The Day – If you can’t be a good example, then you’ll just have to serve as a horrible warning.

6 Responses to “Michigan Back Roads”