The problem with getting up early in the morning is that, like any bad habit, if you do it too often, you find yourself caught up in the action without even realizing it, or giving it a second thought. When that happens, only strong intervention and a lot of willpower can break the vicious cycle.  After our week at the Winnebago service facility in Iowa, I fear I’ve reached that point.

We were out of bed before 7:30 yesterday morning, and within an hour or so we had the RV packed up and ready to roll, the water and electric connections unhooked, window awnings and slides in, and leveling jacks up.

After saying our goodbyes to cousin Terry Cook and his family, we hit the road, headed south on State route 37. We traveled in a heavy overcast past miles of thick forests, broken by occasional small communities, or scattered houses and businesses. 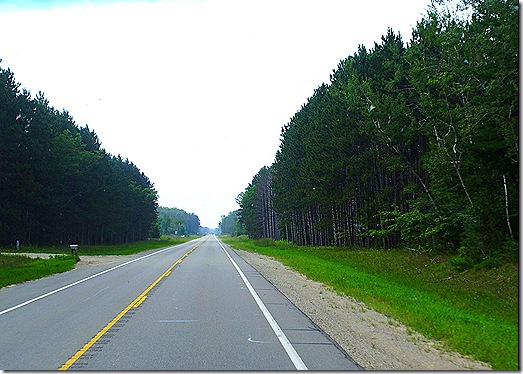 The route was mostly very good two lane highway, with occasional passing lanes. There were a couple of noticeable hills, but we made very good time. 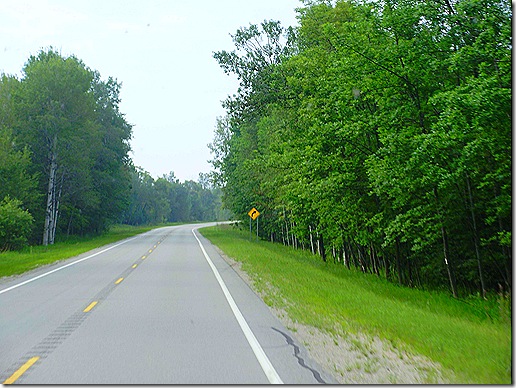 We passed over a couple of rivers that looked inviting, and noted several canoe and kayak rental businesses. We really need to come back here some day and get our boats wet.

There wasn’t much traffic, a few RVs headed north, and the occasional car or truck. 56 miles south, we got onto U.S. Highway 10, and another 25 miles brought us to U.S. Highway 31 southbound, an excellent divided four lane highway. 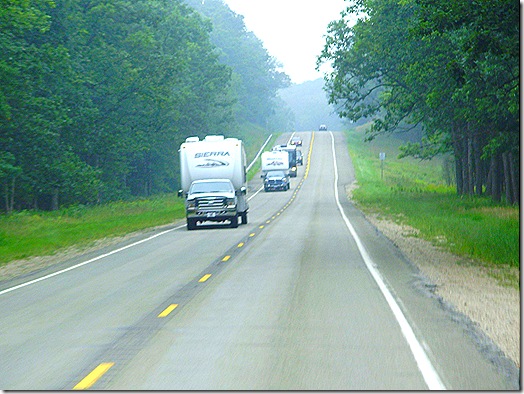 Less than an hour later, we pulled into the city-owned Fisherman’s Landing Marina and Campground. This is our regular stop when we visit Muskegon. We dumped our holding tanks, got the motorhome parked and hooked up in our site, and by then we were dripping wet from the heat and humidity. It sure was nice to get that basement air conditioner working to cool things down!

Fisherman’s Landing is a Passport America affiliate, and able to accommodate any size RV. The place is only about half full. 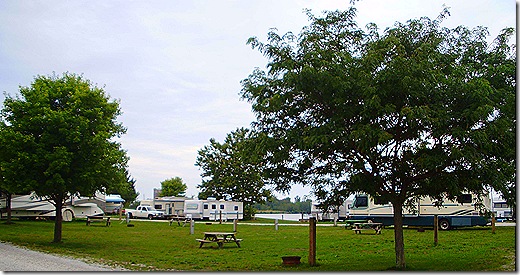 Our site is a back in, with 30 amp electric, water, a concrete pad, and a picnic table. Here is our Winnebago, all set up and ready to be home for the time we’re here. 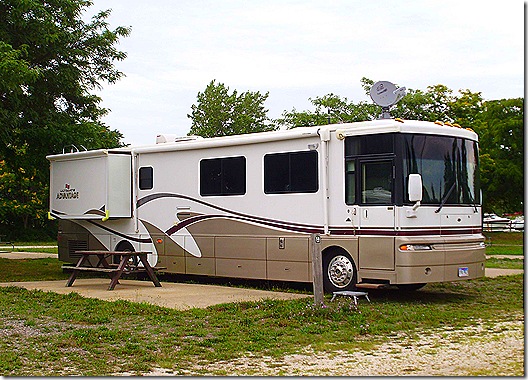 My cousin Berni Frees and her husband Rocky are working folks, and they wouldn’t be home until about 5 p.m., so once we were settled in, I took a nap while Terry checked her e-mail and just enjoyed being inside where it was nice and cool.

Later on, I added the RVSEF weighing forms to our website for those having their rigs weighed at our upcoming rally. Click this link to complete the paperwork for your truck and trailer, or this link for the motorhome worksheet. Print the sheets out, complete them, and bring them to the rally. To schedule your weighing time, or for more information call Rick Lang at (207) 522-3336.

And don’t forget to call Dennis Hill at the RV Driving School at (530) 878-0111 to arrange for your behind the wheel driving lesson at the rally! Separate fees are charged for the weighing and driving lessons, but the costs are small, and they are two of the best investments you can make in your safety.

In addition to the campground, Fisherman’s Landing has a boat launch that always seems to be busy with fishermen and recreational boaters coming and going. When we left to go to Rocky and Berni’s house later in the afternoon, Terry took this picture of a tug boat docked across the inlet from the boat launch. 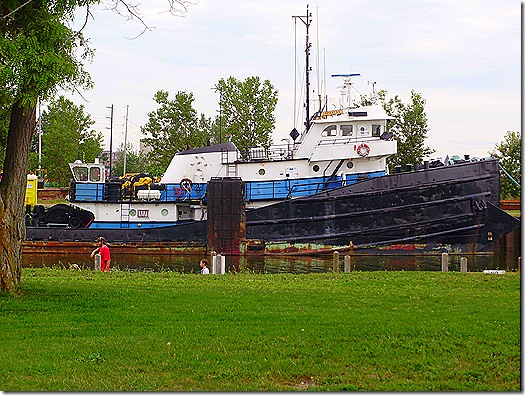 It’s always fun when we get together with Rocky and Berni, and though we had not seen them in a year, it was like it was only yesterday. We picked right up with the silly banter we enjoy so much with them. We all piled into their car and went to a great Chinese buffet for dinner, and then back to their place for an evening of Mexican Train and more good times with good friends.

We’ll be here a few days, visiting, and getting some more prep work done for our Eastern Gypsy Gathering rally.  Then it’s on to Elkhart!

3 Responses to “A Vicious Cycle”