I closed yesterday’s blog by telling you we had tire troubles. Here’s the story:

From the time we left Gilroy Tuesday morning, until the time we arrived at the the Emigrant Trail Museum in Truckee that afternoon, one of our inside dual tires had lost over 35 pounds of air. This is the same problem we have been having with the inside duals ever since Camping World installed them the end of February. Supposed they fixed it when we went back a few weeks ago, but evidently not.

At that time it was determined that the problem was the valve extensions, and it might still be. Especially since one look at the scratches and tool marks on it told us that the valve extension was not new, and was probably the one that gave us problems before.

Our motorhome has an onboard air compressor, and I have an air hose, but as it turns out, there is a problem in our auxiliary air system somewhere and we couldn’t get it to work. We found a gas station where we could fill the tire, and I left the valve extender and PressurePro sensor off, and checked the tire again before we set off yesterday and it was still holding pressure. So once we get into Salt Lake City, I’ll find a new extender to put on the tire.

Yesterday morning we left Boomtown Casino and followed Interstate 80 east across Nevada, Traffic was busy in Reno, but the rest of the day we didn’t have much to deal with. The first part of our route was pretty curvy as we followed the Truckee River, and then we came into a big valley with salt flats as far as the eye could see. We zipped past this barren landscape in no time at all, but it took the pioneers of the Donner Party six days to cross the salt flats. 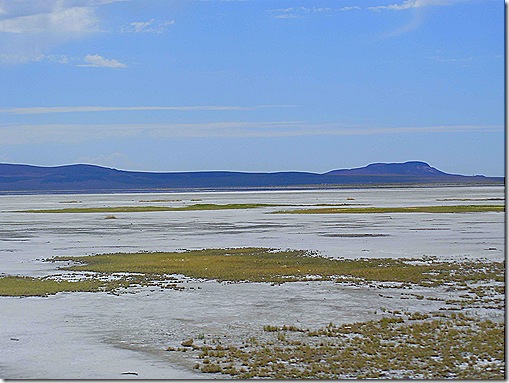 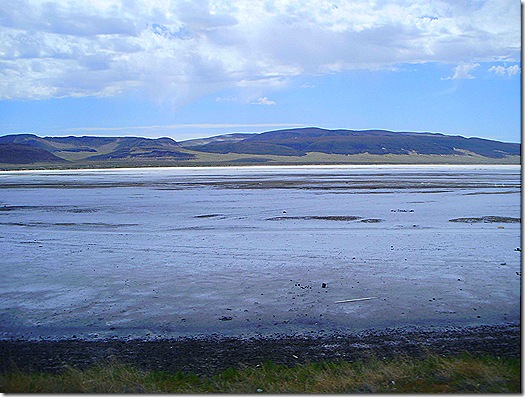 Miss Terry was taking pictures out the window as we motored along, and she managed to capture this smiley face somebody made to welcome travelers. 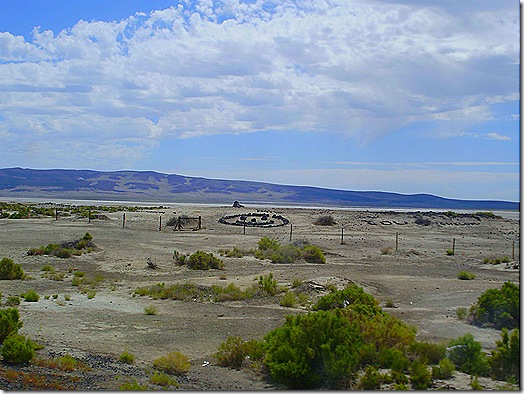 Some of the mountains off in the distance still had snow on top of them, but down on the highway it was over 90 degrees! 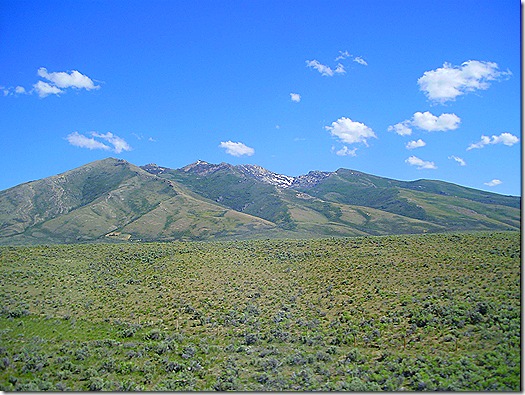 Part of our route had some steep climbs and downhill grades, but nothing compared to crossing the Sierras the day before. Both days, the Winnebago had no problems, the big Cummins diesel engine never started to get too warm, and carried us over the top as fast as I wanted to go. After years of being passed by eighteen wheelers in our old bus on even small grades, it’s sure nice to pull over into the left lane and pass them by as they labor up the hills! 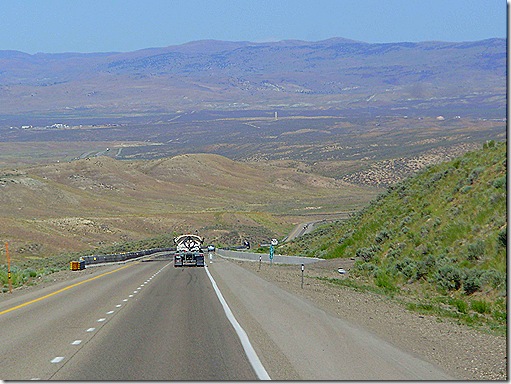 We stopped at the Flying J in Winnemucca for fuel, but their RV pumps were out of order, and there was a long line of trucks at the truck islands.  We continued on another 50 miles to Battle Mountain. I don’t think the Flying J there was a company store, but rather an affiliate, but it was easy to get in and out.

We saw some nice rock formations alongside the highway! 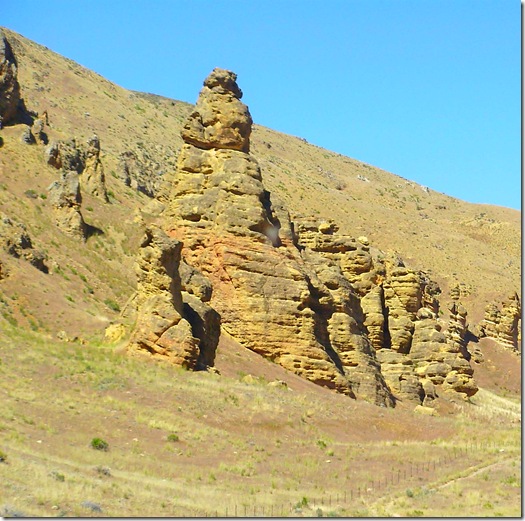 We arrived at Crossroads RV Park in Wells, Nevada about 4:30 p.m., with  346 miles under our belt for the day. Crossroads is a small Passport America park, nothing much but a gravel lot with 30 amp full hookup RV sites. But at just $10 a night, it’s a good bargain. We have four bars of high speed EVDO internet service, which is always nice.

One of our subscribers recommended Crossroads to us, and said the managers, Dennis and Irma Sayers, were wonderful people. When I checked the place out on RV Park Reviews, their friendliness was mentioned in the first three reviews I read. So I was looking forward to meeting this nice couple.

Sure enough, they were just as nice and helpful as could be; Irma checked us in and chatted for a while, then Dennis got us parked and made sure we were hooked up okay. I asked about restaurants, and Irma got right on the phone to call the shuttle van from a local casino to come and pick us up and take us to the restaurant. You don’t get that kind of service very often!

When we got back from dinner, Dennis and Irma stopped by to check on us, and Terry gave them a tour of our motorhome. I think Dennis was thinking about going RV shopping by the time they left!

We have about 180 miles to go today to reach Pony Express RV Resort in Salt Lake City, and then we’ll have a few days to relax, do some genealogy research, and we have a couple of technical issues on the motorhome that we need to look into. Nothing major, but apparently the gremlins have been at work.

Thought For The Day – A true friend is someone who sees the pain in your eyes while everyone else believes the fake smile.