Since the folks at the Winnebago Service Center don’t work on weekends, we spent the last two days just goofing off, waiting for work to resume on our motorhome today.

Saturday we caught up on some paperwork, visited with our neighbors here at Camp Winnebago, and then went out to dinner with a few folks, at a fantastic restaurant in the tiny town of Thompson, Iowa called the Branding Iron. I had one of the best rib eye steaks I’ve ever eaten there, and Miss Terry had grilled salmon that she absolutely loved. I’m not much of a salmon fan, but I took one bite of hers and resolved to order it if we went back again.

Sunday we went exploring in Clear Lake with our pals Ron and Brenda Speidel. Old time rock and roll fans will know Clear Lake because it was here, on February 3, 1959, that musicians Buddy Holly, Ritchie Valens and J.P. Richardson (the Big Bopper) were killed when their chartered Beech Bonanza crashed into a corn field shortly after takeoff, during a winter storm. In addition to the three popular performers, pilot Roger Peterson was also killed in the crash. The tragedy became known as The Day The Music Died.

Ron and Brenda had been to the crash site a couple of years ago, but there was some confusion as to the exact route to get there, and we made a couple of false starts before we finally stopped to ask a lady working in her yard for directions. (Or, as Ron says, “clarification” of what he already knew). She laughed, pointed us in the right direction, and joked with us about men never wanting to ask directions. “If Moses had been a woman, the Israelites wouldn’t have spent 40 years wandering lost in the desert,” she declared.

Finally at the crash site, we parked the car and took a photo of these giant Buddy Holly glasses, and then walked about a 1/2 mile down a dirt path into a cornfield. 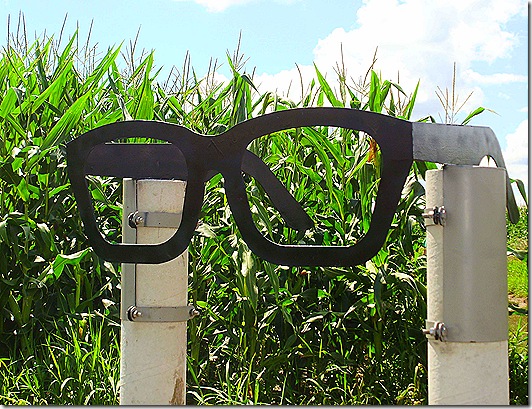 A simple stainless steel monument, shaped like a guitar, and topped off with three records, stands where the airplane plunged into the earth. The monument looks like it is surrounded by what at first looks like a pile of trash, but upon closer inspection turns out to be small tributes and gifts left by fans. Everything from photographs and notes, to trinkets, and even a cassette tape of a Buddy Holly concert. 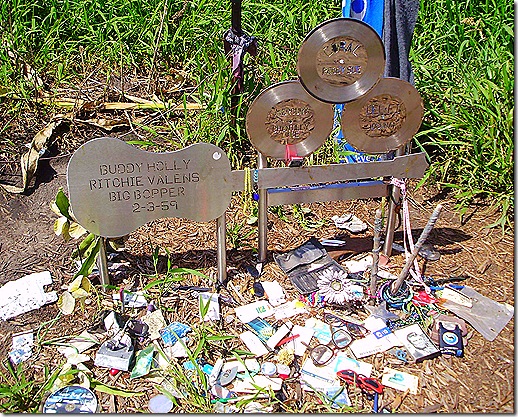 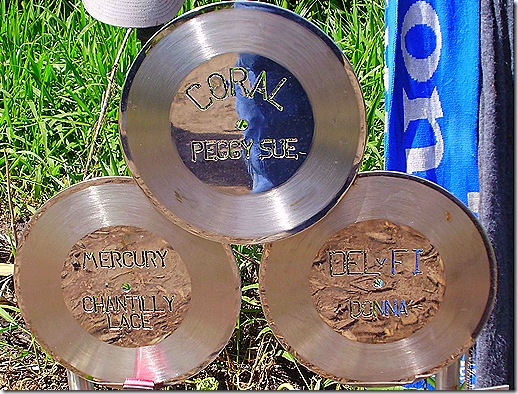 Next to the monument is a separate memorial to the 21 year old pilot of the airplane, Roger Peterson. 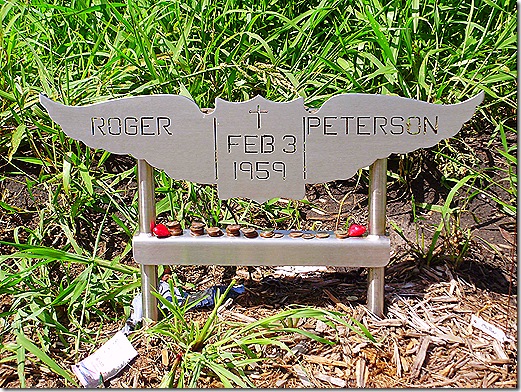 Back in Clear Lake, we stopped by the Surf Ballroom, where the musicians played their last concert, the night before they died. The venue still draws big name performers. The marquee said that Ted Nugent had played there just two days ago. 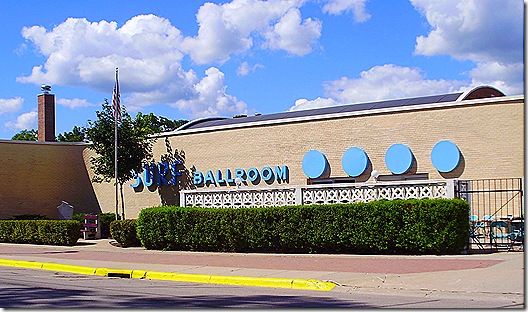 As we were leaving town, we checked out this neat pyramid shaped house, which has won awards and has been featured in architectural magazines. 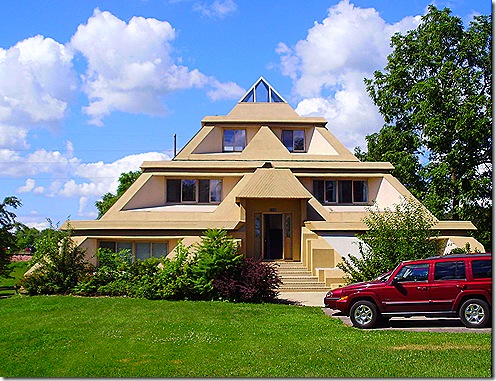 Back in Forest City, we dumped our holding tanks and filled up on fresh water, and then went out for a quick dinner at A&W Root Beer. You know the humidity is high in the Midwest when restaurants have signs like this on their doors! 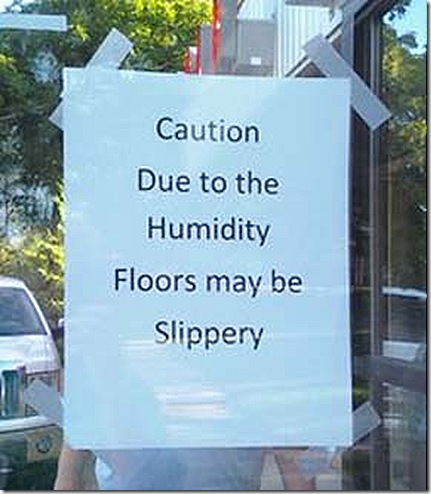 Today we had to be up at the ungodly hour of 5 a.m., because they were scheduled to  take our motorhome back into the shop at 6 a.m. to get going on the rest of the work we have scheduled.

I have no idea why these people don’t work on a more reasonable schedule, starting at maybe 8 a.m., which is still way too early for me, but at least it would be daylight outside. I told Ron not to be surprised if I showed up on his doorstep looking for a place to curl up and snooze during the day!

Thought For The Day – If you can’t change your mind, are you sure you still have one?

10 Responses to “The Day The Music Died”