We were up by 7 a.m. yesterday, which is way too early for us, but we had a lot of miles to travel. We pulled out of Pony Express RV Resort in North Salt Lake, took Interstate 215 around the west side of Salt Lake City to where it joined Interstate 15 on the south side of town. I-215 was a nice road, but as soon as we hit I-15, we ran into heavy traffic and road construction that lasted all the way south to Spanish Fork. By the time we left the interstate there and got onto U.S. Highway 6, I was sure glad to get off the superslab.

It was 133 miles to Interstate 70 at Green River, and a lot of it was two lane road. U.S. 6 is a good road, but not one where you’ll go very fast. In some places it is narrow, there are no shoulders, and it does some climbing. 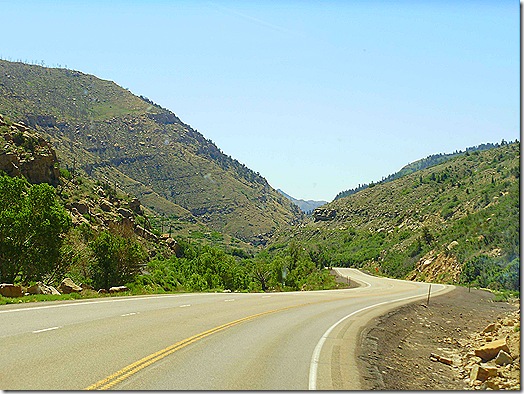 It also has a couple of steep downgrades, but they are relatively short. 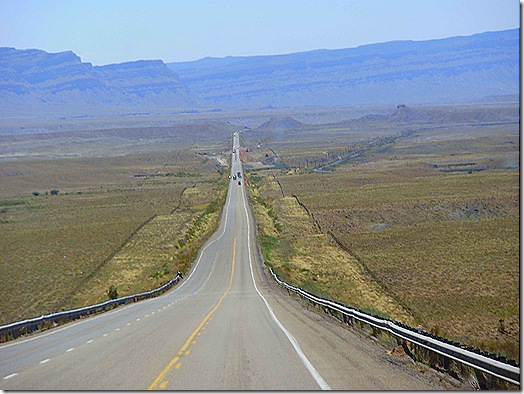 Did I mention it has a lot of twists and turns, especially as it goes through Price Canyon? Note the road sign. It didn’t exaggerate! 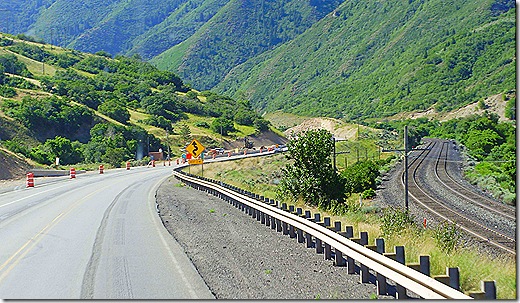 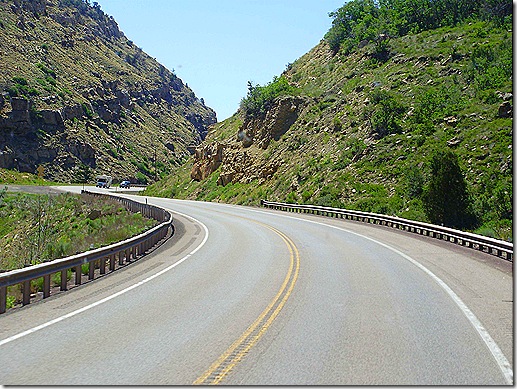 Price Canyon was pretty impressive, in spite of the bug on the windshield. 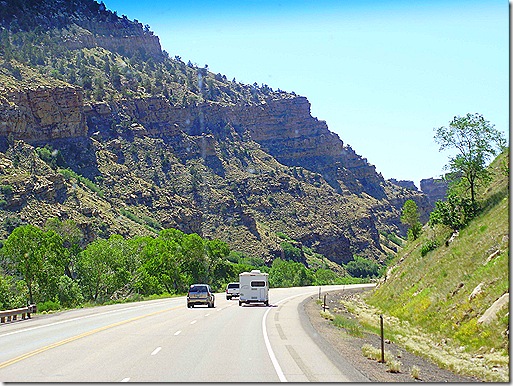 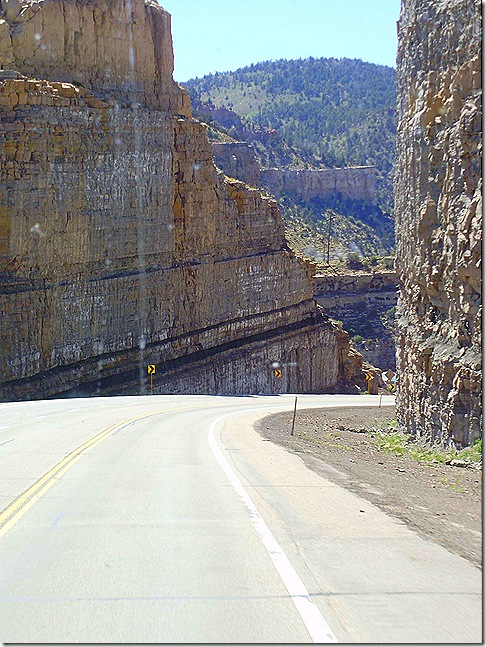 We also had several stretches of road construction to deal with. At one point, the road was down to one lane, and we passed a long line of cars and trucks headed the other way who were waiting for their turn to go. 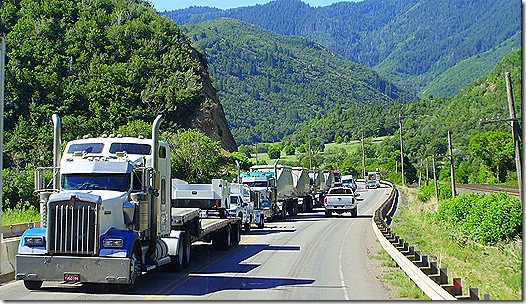 We also saw a wind farm. Nothing strange about that, except most of them that we have seen are on top of ridges to get the most wind. But these were down low. 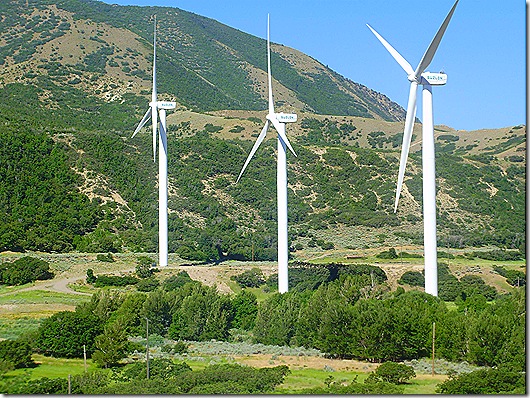 Miss Terry ran down the batteries in both of our Olympus digital cameras, but she got some great pictures. There were quite a few railroads tunnels through the mountains. 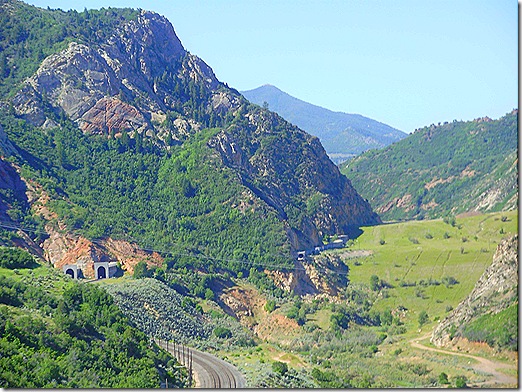 Once we passed the little town of Price, about halfway along U.S. 6, the road became wider and the countryside flatter. We even had some four lane stretches of roadway.

It was hot! When we got onto Interstate 70, my dashboard thermometer said it was 104 degrees, and later on, as we crossed into Colorado, it was 106! But, our Winnebago performed well and climbed up the steepest grades without hesitation. 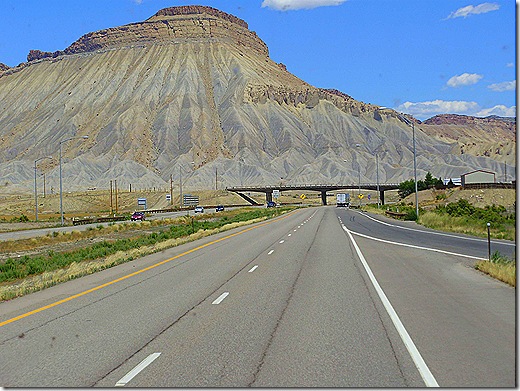 We saw some gorgeous scenery in western Colorado, including lots of impressive rock formations. 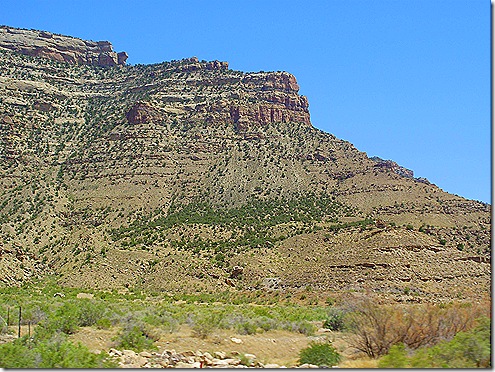 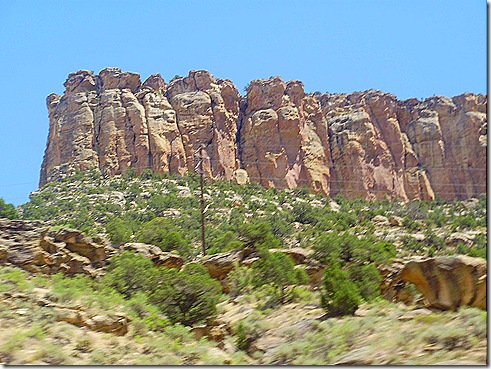 The scenery was absolutely spectacular, and the highway had lots of curves and, of course, more construction zones. 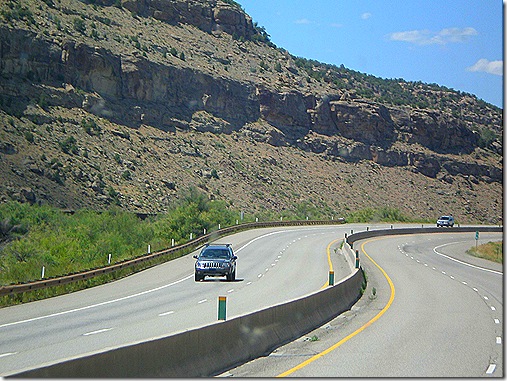 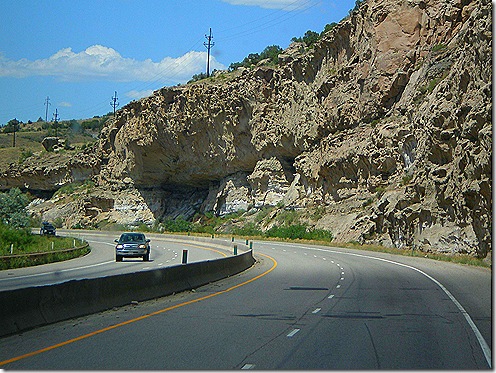 The highway follows the river, and we saw lots of rafters and fly fishermen. 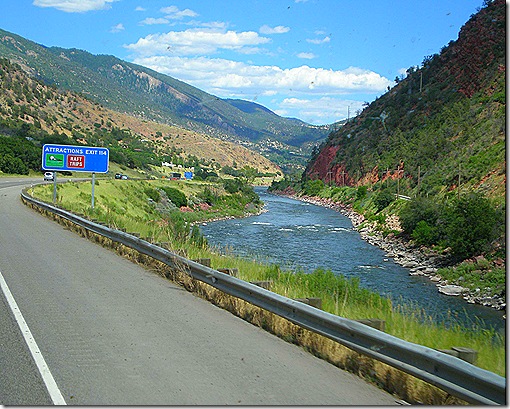 Did I mention the road construction? 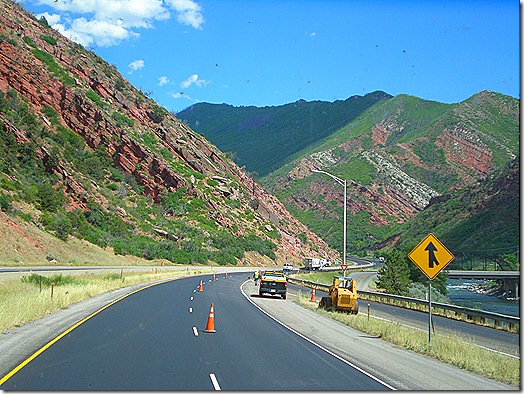 The battery in the second camera died just as we got to Glenwood Canyon, which was disappointing, because it was breathtaking.  I want to go back and drive this stretch of road in the van, and see it again.

We arrived at River Dance RV Resort in Gypsum just after 4 p.m., covering 397 miles in one day. That’s a lot of driving, and we much prefer 250-300 mile days. But sometimes you just do what you have to do.

Rusty and Rebecca at River Dance are super friendly people and really made us feel welcome. There was a little snafu, because the full hookup site they had reserved for us was still occupied by the previous person, and he was off sightseeing somewhere.  Rusty had us pull into another site, with water and electric, so we could plug in and have our air conditioner on while we waited. They were both very apologetic, but what the heck, things happen. It was no big deal.

Once we got into our site, we had a great view out of our windshield. You can’t see the Eagle River in this picture, but it runs right alongside the campground, and if we had time, I’d launch our kayaks. 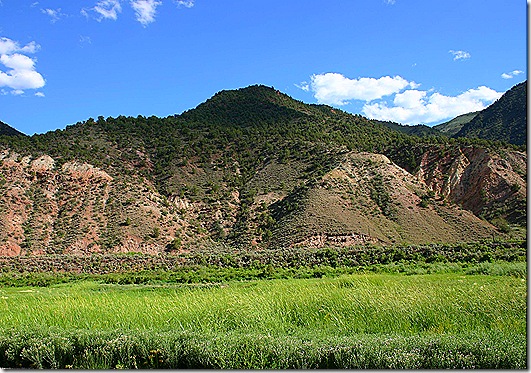 Here is the view behind us. I don’t think there is ten feet in flat land in all of the western half of Colorado! 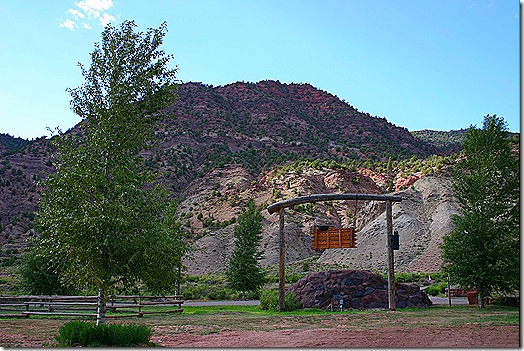 By the time we were settled into our site and hooked up, we were famished. Terry drove the 7 miles to Pazzo’s Pizza, in Eagle, where we had one of the best pizzas we have had in years.

Between getting up earlier than usual, the long drive, and the elevation, we were really worn out by the time we finished dinner and got back to the campground. The mosquitoes here are about as big as sparrows, and as aggressive as hawks, so we made a mad dash for the RV. But I still got bitten two or three times before I could get the door unlocked and we could get inside.

Today we plan to sleep late, and then do a whole lot of nothing. We had a busy week in Salt Lake City, and we have a busy weekend ahead of us, so we need to take advantage of every quiet moment we can.

Thought For The Day – The most important trip you may take in life is meeting people halfway.