Nick's Blog » Life Is A Crapshoot

In yesterday’s blog, I wrote about a couple of bad experiences I had here in Morgan Hill, California. But those were petty little inconveniences in the overall scheme of things. Just remember that old saying  “I complained I had no shoes, until I met a man who had no feet.”

Compared to what fellow Escapees Mel and Charlene Schwartz just went through, getting a bad meal or being hassled by an overzealous cop is nothing!

Mel wrote me that about 3 p.m. on June 29, they were driving east on U.S. Highway 50 just outside of Delta, Utah, doing about 55 miles per hour, just enjoying the scenery on the two lane highway, when this limb broke off a tree beside the highway, crashed into the hood of their Ford truck, and then through the windshield, showering them with glass. 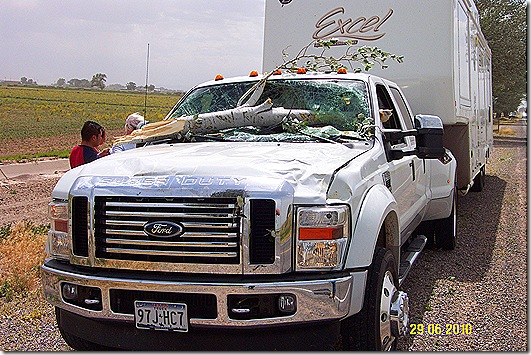 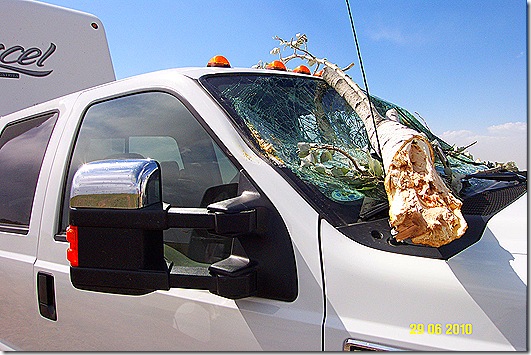 Their guardian angel must have been riding with them that afternoon, because unbelievably, Mel and Charlene were not injured. It’s a wonder they weren’t killed! Look how the limb slammed through the driver’s side of the cab and out the window! Mel said that aside from being scared and shook up, they were unharmed. 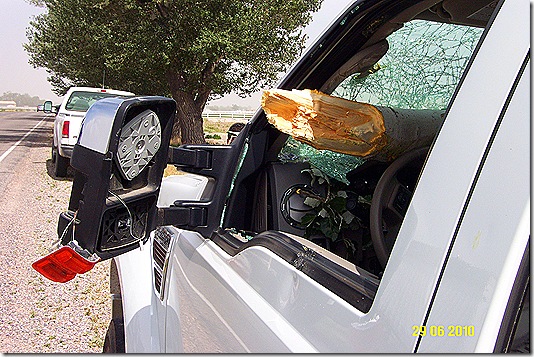 Mel said their Excel fifth wheel was not damaged, but the truck is going to need extensive repairs. They are currently in an RV park in Delta, and the truck is in a local body shop, waiting for the insurance adjuster to show up. Mel said that once they were set up in the RV park, they spent an hour vacuuming bits of glass out of each other’s hair. 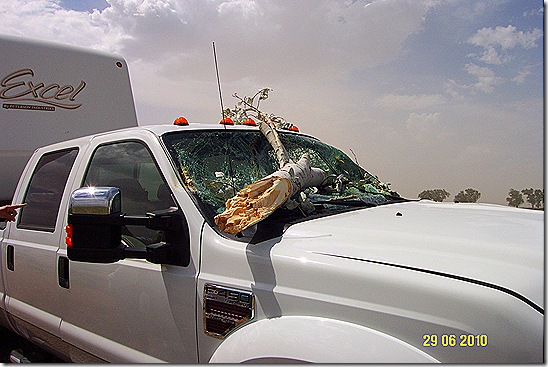 As a side note, Mel told me that the sheriff’s deputy that investigated the accident said that he had been notified of a tree limb that was about to fall, but hadn’t been able to get to it yet. As Mel said, timing is everything.

This is a perfect example of why I believe that while we can take every reasonable precaution in the book, sometimes things just happen, and when they do, all we can do is roll with the punches.

We never know when the car or truck coming toward us down the highway may cross the centerline and hit us head on; or when a tire on the eighteen wheeler passing us may blow and wipe out the side of our RV; or when some tiny speck of plaque in an artery will break loose and block the blood flow; or a million other things that probably will not happen, but can at any instant.

What quirk of fate determines who will dodge the bullet, and who won’t? Why did I have friends who survived Vietnam, only to come home and die in traffic accidents? What keeps that semi tire from blowing when the truck passes me and makes it blow when passing some other poor guy? As I wrote in yesterday’s blog, life is a crapshoot. Sometimes you win, and sometimes you lose.

We can’t live our lives in fear of everything, so all we can do is cherish every moment we have, and thank whatever higher being we believe in when we have a close call and survive.

Thought For The Day – When life sends storms, remember to dance in the rain!

10 Responses to “Life Is A Crapshoot”