After boondocking in the parking lot overnight, we pulled out of the Flying J in North Platte, Nebraska just after 9 a.m. and headed east on Interstate 80. There were some clouds overhead, but no rain coming down.

For years I have driven under the huge wooden arch that spans Interstate 80, near Kearney, Nebraska, and wanted to stop. Yesterday seemed like the perfect time to do so. 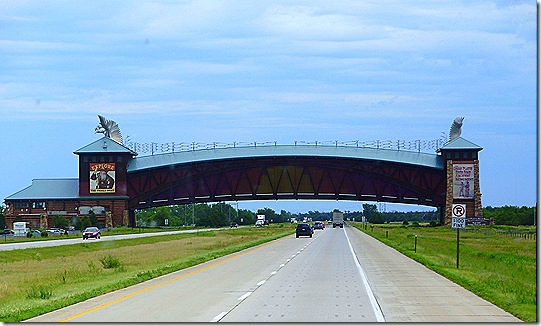 The official title of this impressive work of architectural wonder is the Great Platte River Road Archway, and if you like history as much as we do, you just have to stop here! Displays and audio descriptions inside tell the story of the pioneer trails that all came through here, headed west, and the brave people who set off for a new life in the wilderness. 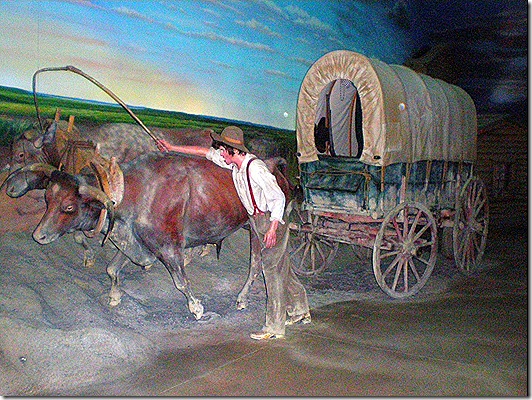 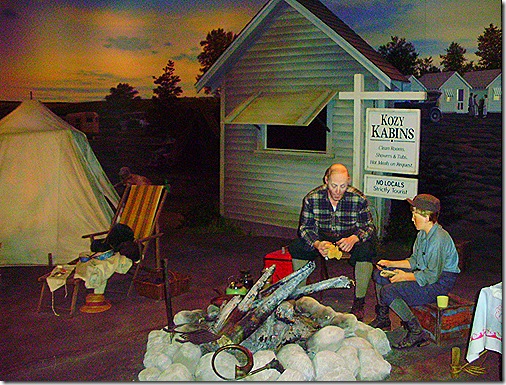 Executive Director Gary Roubicek greeted us, told us a little about the history of the archway, and then sent us off to explore. We had a wonderful time, and I’d love to tell you all about it, but I’m saving this story for a feature in the next issue of the Gypsy Journal!

But I do have to tell you one very impressive fact about the arch. It was constructed in two halves, one on each side of the interstate, and then when it was time to put it all together, the highway was closed at 11 p.m. one night, huge cranes lifted everything into place, set it all up, and twelve hours later traffic was flowing again! What an engineering feat! 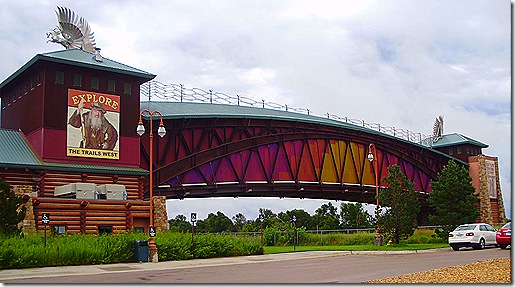 Here is a view from the arch, as traffic speeds past under us. 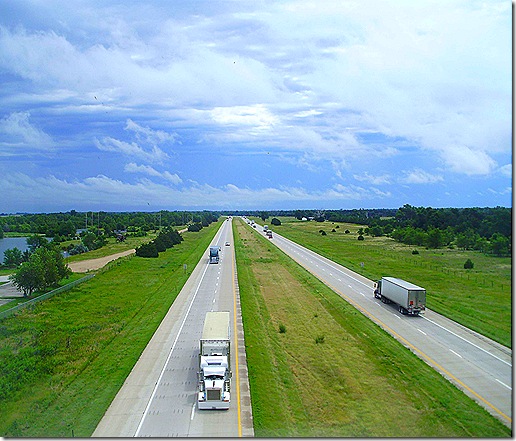 After touring the arch, we browsed the gift shop, where we picked up some excellent local history books, and then walked outside and across a bridge to view a Pawnee earth lodge. Very impressive. 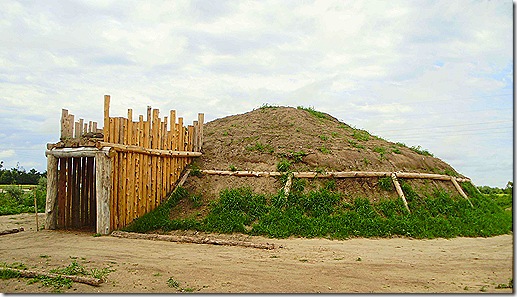 A huge school of large carp live in the river, and we paused on the bridge to drop some food down to them, and watched as they made the water boil, fighting for it. 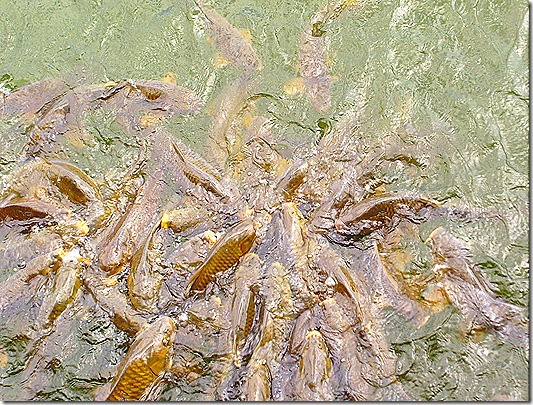 Just a short walk from the Archway is the Nebraska Firefighters Museum, and though we didn’t have time to stop, we made a mental note for our next trip. If you are traveling through central Nebraska, take the time to stop and check out the Archway. They have lots of room for RVs to park, and even welcome you to dry camp overnight! 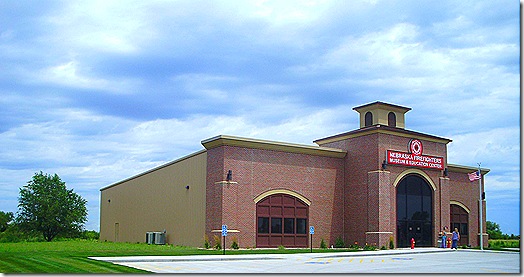 Back on the highway, we continued east, crossed the Missouri River at Omaha, and on the Iowa side we got onto U.S. Highway 30, which took us through several small towns until we connected with U.S. 59 at Denison.

Now, I love traveling the two lane roads, but I have to say that U.S. 59 sucks. I have been on cow paths that were wider and better maintained. We bounced and rattled our way north for 15 miles or so, then the highway suddenly ended in a construction zone and we found ourselves detoured onto a series of narrow county roads that were still much better than the U.S. Highway. Where the heck are our highway tax dollars going, anyway?

Somehow we managed to escape being eaten by a Holstein, and wound our way north to Spencer, Iowa, where we pulled into the city-owned East Leach Park Campground about 7:30 p.m. We had driven 441 miles, which is a long day even on a good road, let alone some of the trails we covered in western Iowa.

We love the campgrounds in small town city parks that we have stayed in from coast to coast, but we were really disappointed in this one. For $15 a night, we got an RV site with water and 30 amp electric, which sounds like a good deal. We had lots of room, since there were only a half dozen RVs in the campground, but even though we were the only RV in our section, the electric power was terrible. 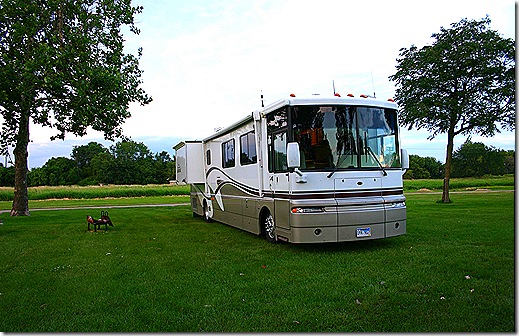 Our Progressive Industries electrical management system (EMS) showed 123 volts of power, then it would drop down to below 106 volts and the EMS would shut done to prevent damage to our coach, which is what it is designed to do. The power would come back on at 123 volts, and then start dropping again any time we turned anything on. We shut down the air conditioner, put the refrigerator on propane, and turned off the battery charger, and at  one point we were only drawing two amps, but the circuit kept tripping. I tried two other outlets with the same results.

If it hadn’t been so late, and if we were not so tired, we would have moved to another section of the campground, but it didn’t look like any of the other places available were any better.

We only have 90 miles to go to get to Forest City, and if we don’t get stuck in the grass from the storm that is just rolling in as I post this at midnight, we should be there early enough in the day to get our names on the list and a head start toward a factory service slot.

Thought For The Day – Life is like a jar of Jalapeno peppers; what you do today, might burn your butt tomorrow!