After our fast trip from Colorado to Iowa, then our busy week in Forest City getting our motorhome worked on, and then our fast trip to northern Michigan, we needed some time to catch up, both on our sleep, and our paperwork. Not to mention our laundry.

So yesterday morning we slept in, and then started whittling down our long “To Do” list. The first order of the day for Miss Terry was to begin reducing the pile of laundry that had accumulated. Since we hadn’t had full hookups since we left Colorado, it was threatening to spill out of the basket and take over the bedroom.

Terry hates laundromats, and is getting used to the washer/dryer combo in our Winnebago. She says it’s not as good as the separate Whirlpool washer and dryer units that we had in our MCI bus conversion, but it’s much better than the old Splendide we had in our first motorhome. An added plus for her while we’re visiting family here in Traverse City is that she doesn’t use our dryer, she hangs things out on the clothesline. Is there anything as crisp as freshly washed sheets that have dried outside in the sun?

I had a mountain of my own to deal with as I worked my way through an accumulation of e-mail. I have to say that I get pretty frustrated when I tell people that I’m in a poor internet service area, and not to send me any forwards or jokes, and they do so anyway. One fellow sent me 19 in one day, and 13 the next! When I wrote and asked him (again) not to do that, he just replied “If you don’t want them, don’t read them.” Here’s a better idea, fellow, I’ll just block all of your e-mail from now on!

Two weeks’ backlog of snail mail had arrived from our mail forwarding service, and we were also busy sorting that and logging in renewals, book orders, and rally registrations.  We also received back an order we sent out to J. Andrews of Mesa, Arizona, with a notation by the post office that it was undeliverable. If you’re reading this, please contact us with a current address, so we can get your items out to you.

One of the reasons we rushed here so fast is that we have a very dear friend who is fighting a tough battle with cancer, and things have been touch and go for a while now. When Miss Terry was going through that ordeal herself, our friend was a constant source of love and support, and we wanted to get here to spend as much time with her as possible and as her stamina allowed. So during the afternoon we paid a visit on her.

I also went to the Northwestern Michigan Fairgrounds to check out their campground and talk to the folks there about the possibility of  holding one of our Gypsy Gathering rallies there in the future.

They have 120 sites with 20/30/50 amp electric power, water bibs, and two dump stations. They told me that they can also put out portable power lines to provide electric to plenty more RVs, as needed. The buildings are a little small for our crowd, but it might be workable. 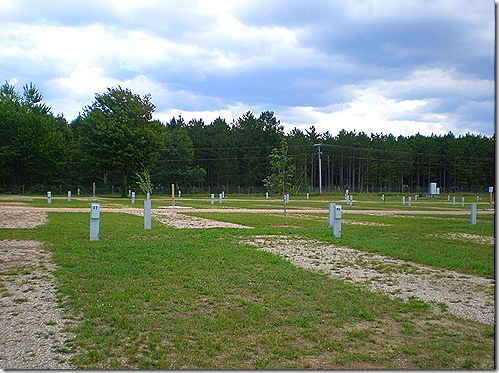 If you find yourself in Traverse City, this is the best bargain on camping anywhere in the area. Rates are just $20 a night, or $125/week. In this resort area, that’s a heck of a deal. 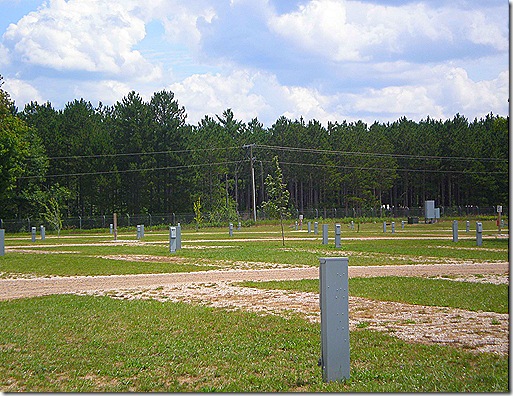 As these photos show, they can accommodate any size RV, and there is enough to see and do in this area to keep you busy all summer long. Check out their website for more information. 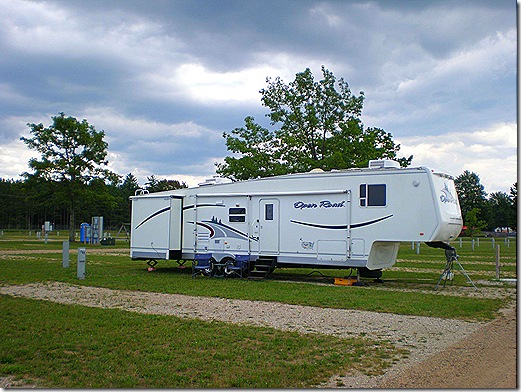 In another of those small world syndrome things that happen so often, we discovered that the campground hosts, Henry and Kay Hauffe, just had their fifth wheel painted by our pal Michele Henry at Phoenix Commercial Paint in Elkhart, and that they know many of the same people that we do. The community of fulltime RVers may be spread out all across the land, but we are a close knit group.

It was my cousin Terry Cook’s birthday, so in the evening we took him and his wife Peggy out to dinner to celebrate. By the time we got back to the motorhome, we were tired and looking forward to climbing into bed again.

Thought For The Day – Keep your words both soft and tender, because tomorrow you may have to eat them.

4 Responses to “Catching Up”