We started out in Salinas, at the National Steinbeck Center, where native son John Steinbeck is honored for his work and for the recognition he brought to this region of California.

I have been a Steinbeck fan ever since I read The Red Pony as a youngster, and over the years I thought I had been through all of his works. How wrong I was! Besides such well known classics as Of Mice and Men, Cannery Row, and The Grapes of Wrath, Steinbeck wrote a total of 27 books, as well as short stories, a few screen plays, and numerous magazine articles.

Exhibits throughout the Steinbeck Center illustrate many of the author’s best known books, including a red pony that kids can touch, produce crates much like the Dust Bowl Oakies would have filled with crops, and a Chinese grocery store from Cannery Row. 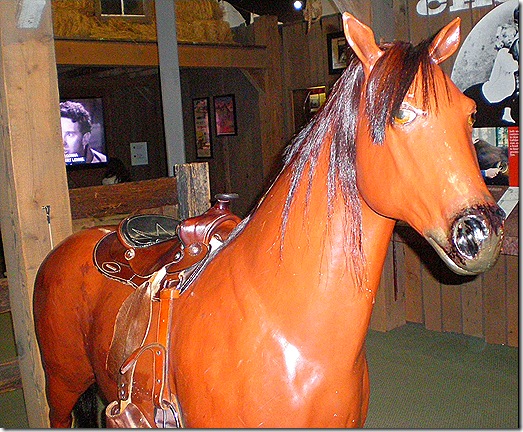 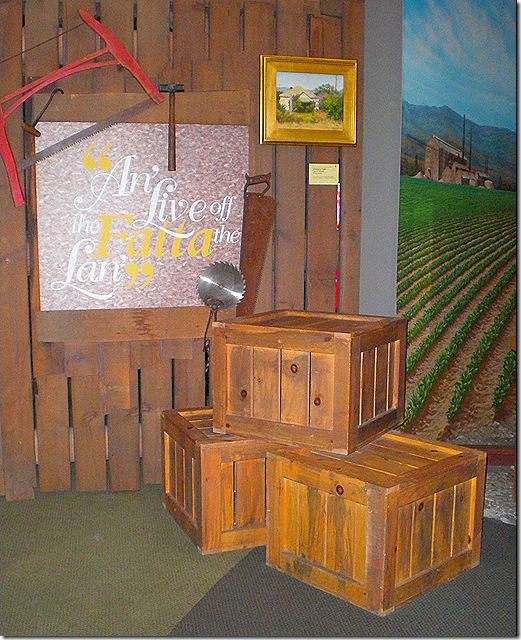 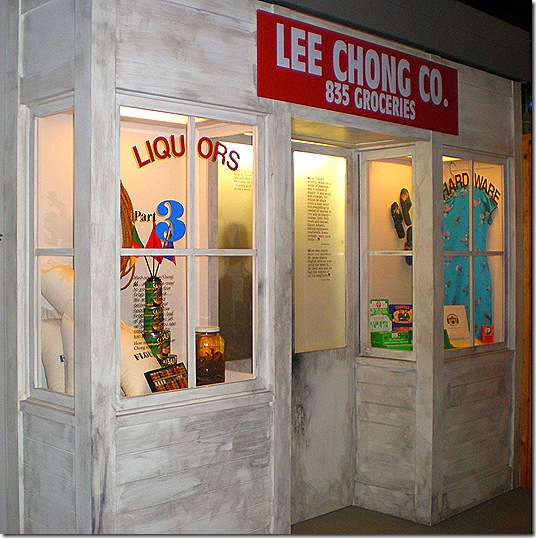 It is interesting to note that while Salinas celebrates John Steinbeck these days, at one time his depiction of the plight of the Dust Bowl refugees in The Grapes of Wrath outraged the movers and shakers in this farming region. The book was banned in libraries throughout California’s agricultural communities, and  twice the book was publicly burned in his old hometown. Steinbeck wasn’t the only author that was once vilified in his own hometown. Sauk Centre, Minnesota once burned Sinclair Lewis’ book Main Street because they felt the author showed the community in a bad light.

I learn something (usually a lot of things) new every day, and at the National Steinbeck Center, I learned that the author served as a war correspondent during World War II, and was known to shed his identifying armband that showed him to be a noncombatant, and pick up a rifle when things got ugly.

My favorite John Steinbeck book is Travels With Charley, his road journey epic, and National Steinbeck Center has the GMC truck and camper that the author and his canine pal made their trip in. And yes, I know, Charley was, dare I say it, a French poodle! But at least he was a standard size poodle, not one of those yappy little mutts that aggravate me so. Since he was such a great and prolific author, I’m willing to give Steinbeck a pass on this one indiscretion. The truck and camper are behind protective shields, but we were able to get a picture of the outside of the truck and the inside of the camper. 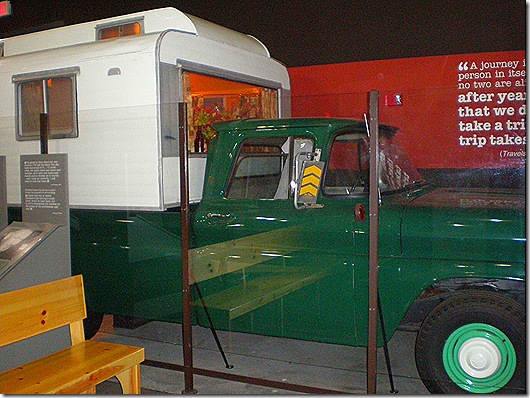 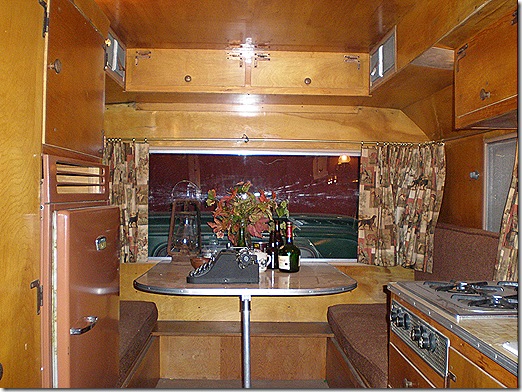 John Steinbeck was born just two blocks from the National Steinbeck Center, so once we finished our tour of the museum, we walked down to check out the handsome Victorian style house, which is now a restaurant. 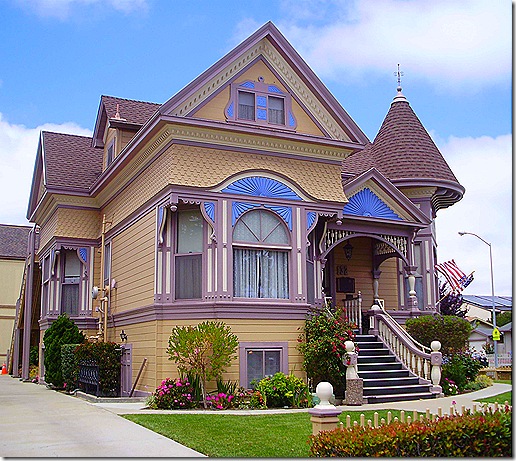 From Salinas, we drive to Monterey, where we had planned to tour the Monterey Bay Aquarium. But somehow, communications broke down, and the person who was supposed to leave our passes and media packet at the front desk was unavailable, and the receptionist I spoke to obviously didn’t care enough to look into it, so we scrapped that idea.

Yeas ago, we spent one night in Monterey while on our honeymoon, and we quickly left to return to the slower pace of Morro Bay.  Yesterday, traffic was so hectic, and everybody seemed to be in a hurry to get somewhere else, that we both found ourselves getting uptight. With the aquarium visit canceled, we decided to get out of Dodge. Or at least, out of Monterey.

But then we spotted this sign for the Thomas Kinkade National Archive, and decided to stop and check it out. Just as John Steinbeck is my favorite author, Thomas Kinkade is my favorite artist. Known as the “Painter of Light” for the way he incorporates colors to illustrate natural sunlight on a country lane, or the light of a fireplace glowing in a cottage’s windows, Kinkade speaks to my soul, and I could just stand and admire his works for hours. 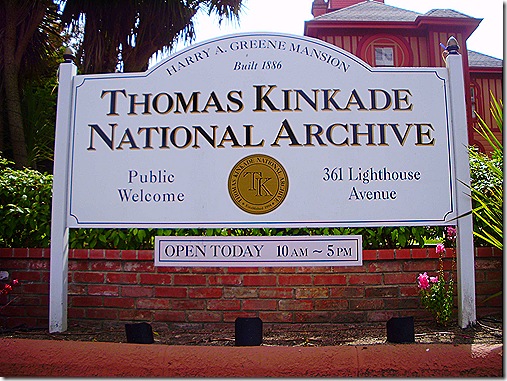 Unfortunately, we didn’t have hours, since the gallery, which is housed in this beautiful 1886 mansion, would be closing soon. But the very nice young man on duty allowed us to take as much time as we wanted to, and we enjoyed seeing a nice selection of Kinkade prints, as well as some of his original works. Due to copyright laws, we could not take any photographs of the works on display, but you can get an idea of how beautiful they are at the artist’s online gallery. 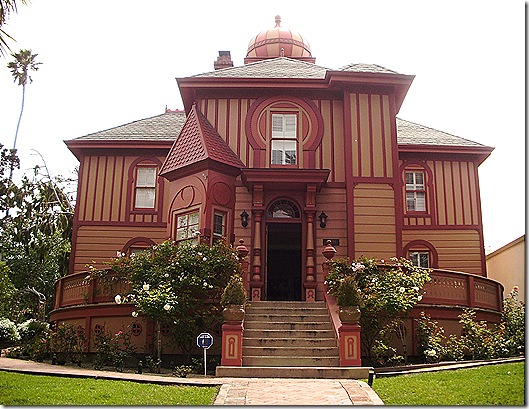 By the time we stopped for dinner and got back to the Thousand Trails campground, the place was a zoo, with weekend campers, kids, and dogs everywhere.

Everybody seemed to be having a good time, though I did have to go across the street and speak to a group who are camping together in two RVs. Having fun is one thing, but when we’re in our motorhome, with the windows closed and the air conditioner on, and we cannot hear our television because of a loud boom box, Bad Nick gets aggravated and needs to get off his leash. One person’s rights end where another person’s rights begin.

Thought For The Day – If at first you don’t succeed, try again. But this time, do it the way your wife told you to in the first place.

9 Responses to “A Tale Of Two Artists”