As I wrote in yesterday’s blog, Wednesday was a long, hard day on the road. We covered over 440 miles, and some of those roads were narrow, rough, and uncomfortable.

Then we had a hard day’s night at the city owned Leach Park Campground in Spencer, Iowa. It was humid and sticky hot, and the electric power was terrible, cutting out every few minutes. We finally decided to heck with it, turned off just about everything electrical in the motorhome, opened up our windows, and put our three roof vent fans on high sped, just to move some air.

About midnight it began to rain, and a few minutes later a strong thunderstorm hit us. We have been in some really nasty storms in our lives, and I even survived a tornado once, but this one was probably the worst storm either of us could remember. All night long the thunder boomed, lighting was hitting close all around us, and the rain just poured down. We had to close all of the windows and the roof vents, because rain was blowing in from every direction, which turned the motorhome into a sauna.

We also discovered that the leak around our living room slide, which Duncan RV in Elkhart had said was fixed, is still leaking, along with several new leaks that came from the driving rain. To be honest, it was coming down so hard, I think it would have even gotten wet inside a bank vault. We brought in the living room slide, both to try to minimize the leaking, and to present a smoother profile to the wind.

We were up most of the night, because it was impossible to sleep. Since we were parked on grass, near a river, we debated whether we should just unhook and drive to the nearby WalMart, where we’d at least be parked on pavement. But with so much lighting all around us, we were worried about going out to unhook the water and electrical connections.

We debated firing up the generator so we’d at least be able to run our air conditioner, but since we were plugged into shore power, I wasn’t sure if the automatic transfer switch would allow us to get power from the generator. At one point, I told Miss Terry that I had had worse nights in my life, but back then people were shooting at me!

Finally, dawn broke, and the rain stopped for a few minutes. I looked outside and we were surrounded by pools of water. I knew that every minute we stayed on the grass brought us closer to sinking, as more rain was on the way.

I started the Winnebago to let it air up, then went outside to unhook the water and electric connections, slogging through water over the tops of my shoes. While I was waiting for the leveling jacks to come up, I tried to move the van out of the way, and the rear wheels promptly sunk. Hmm… that’s not a good sign. If the van got stuck, I knew that there was no way our heavy diesel coach was going to get through the soft ground in front of us, to make it to the road.

The ground seemed a bit firmer behind the rig, so I had  Terry guide me as I very carefully backed across the grass to a gravel roadway. Once I got the RV moving, there was no way I was going to stop until I was on something solid. I left some deep ruts in the grass, but I made it, and I sure felt better once I had that hard packed road under me!

Then it was time to get the van free. With me pushing, and Terry gingerly using the throttle and transmission to rock it, we managed to get it moving and back onto firm ground.

We were lucky. These folks were parked in an RV site right in front of us, and this huge tree limb came down, narrowly missing their trailer, but taking the side view mirror off their truck! I guess they were lucky too, it could have been much worse! 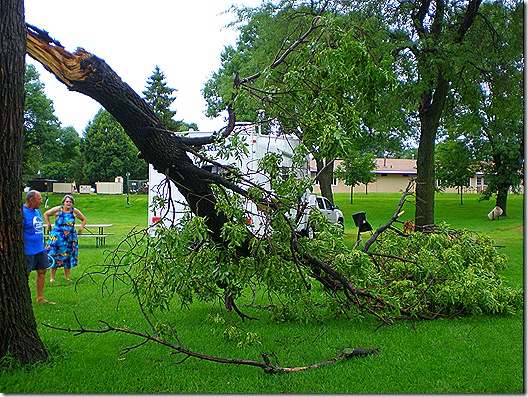 We hooked the van up to our Blue Ox tow bar as it started to rain again, and set out eastward on U.S. Highway 18. We ran in scattered rain showers all the way to Forest City, 91 miles away, but at least the wind had died down.

We arrived at the Winnebago Visitors Center and were assigned a back-in site with good, reliable 30 amp electric, and then walked down the hill to the Customer Service building to put our name on the list for a time slot. It looks like our fast trip across the country will pay off, because we were given an 11:30 a.m. standby time for today. That means that as soon as another job gets finished, we’ll get called in. If we don’t get in today, I’m sure we will on Monday. Since we were originally told it might be Tuesday or Wednesday of next week before we got on the list, we’re glad we rushed to get here.

Once we were we parked and hooked up, our pals Ron and Brenda Speidel came by to give us much needed hugs, and to show us around the grounds. The annual Winnebago-Itasca Grand National Rally ends today, and they have 1,750 Winnebagos and Itascas of every model here for all of the fun. We have never seen so many Winnies, all in one place! 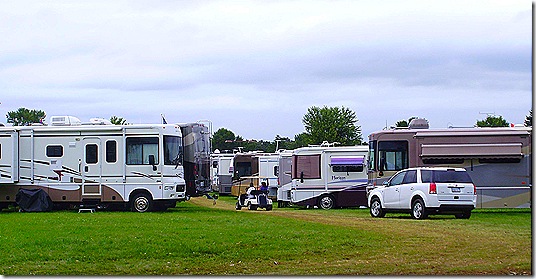 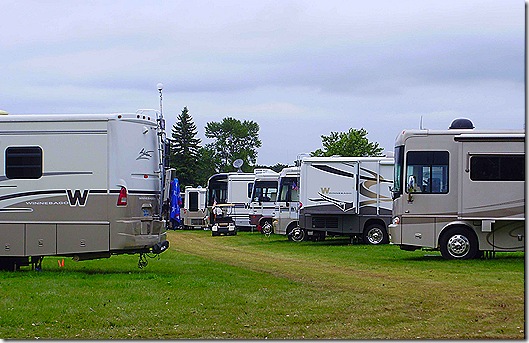 We even saw a rare vintage Winnebago fifth wheel! 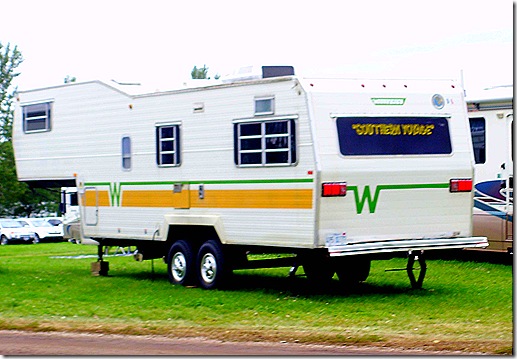 Mike and Elaine Loscher, wonderful friends who have helped us so much with our Gypsy Gathering rallies over the years, are also here, and later in the afternoon we went to dinner with them. It was a treat to have some quiet time with this sweet couple, away from all the hustle and bustle of a rally.

Terry and I were worn out from the fast trip across the country, 950 miles in 2 1/2 days, combined with our long, scary night. Back at the motorhome, we felt like zombies. I wrote my blog post, downloaded some photos from our digital cameras, and Terry caught up on e-mail. We sure were looking forward to getting into that bed and getting some sleep!

Thought For The Day – Daughters hold your hand for a little while, but they hold your heart for a lifetime.

9 Responses to “A Hard Day’s Night”