I spent most of yesterday working on the new issue of the Gypsy Journal, making and receiving telephone calls about our upcoming Eastern Gypsy Gathering rally, and making plans for future rallies.

I had hoped to be almost done with the new issue by now, but I got lazy and didn’t keep on top of things, so now I have to push a little harder to make our deadline. It’s no big deal, we’re not behind schedule, I just have to knuckle down for a few days.

One call I got was from the manager of the Mercer County Fairgrounds in Celina, Ohio, to discuss the dates for our 2011 Eastern rally. That’s a long time from now, but it takes a lot of planning to get things arranged, and venues large enough to handle our size group book well in advance. We didn’t lock anything in yet, but right now we’re looking at either the third or last week of September.

We don’t want to go back to the same place over and over, but it’s not easy to find a venue that has the facilities that we need and that will work within our budget. We had a commitment with the good folks in Celina for three rallies, and we are looking forward to going back to the friendly little town. It’s a very nice fairgrounds, and they really bend over backwards to accommodate our needs. We have never found anybody we can work with as easily.

I also talked for a bit with Daryl Lawrence from Lawrence RV Accessories, and I already have his commitment to be a vendor at the 2011 Eastern rally. We are pleased that so many of our vendors return again and again. That tells us that we must be doing something right.

Daryl and I lamented the fact that it is very hard for vendors to make long range plans, because some RV clubs and organizations don’t seem to be willing to communicate with each other about rally plans, even after they have the dates and locations locked in. I’ve never been able to figure out that thinking. If everybody knows what everybody else is planning, we can work together, rather than planning events with conflicting schedules that only reduce the numbers of attendees and vendors, who can’t be in two places at once. It’s hard enough for vendors to make a profit in this economy as it is, but having to play silly waiting games to find out where and when some of the rallies are going to be held makes it almost impossible.

I also got a telephone call from my daughter Tiffany, to tell me that she and hubby Jim had stopped to check out some Indian petroglyphs on the banks of a dry wash about halfway between Snowflake and Holbrook, some 35 miles north of Show Low. They came around a bend in the wash and spotted a mountain lion feeding on something up ahead. The cougar quickly ran off, but Tiffany said its paw prints were as big as the palm of Jim’s hand up to the second knuckle. And that young man has big hands! They took their clue from the cat and took their leave too, in the opposite direction. Yes folks, some places remain where the West is still wild!

About 4:30 I escaped from my desk long enough for us to drive to Pinetop with Greg and Jan for dinner at the Chuck Wagon Steakhouse, which was a favorite of mine when we lived here. The restaurant is very rustic looking, with an Old West theme that includes an impressive bar, saddles, mounted big game heads, and a chandelier made from elk antlers. 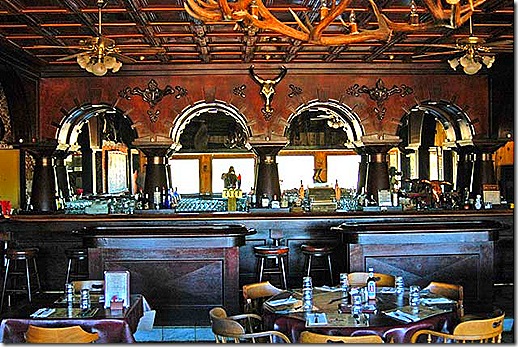 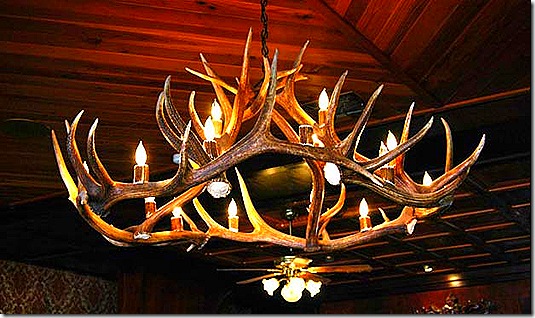 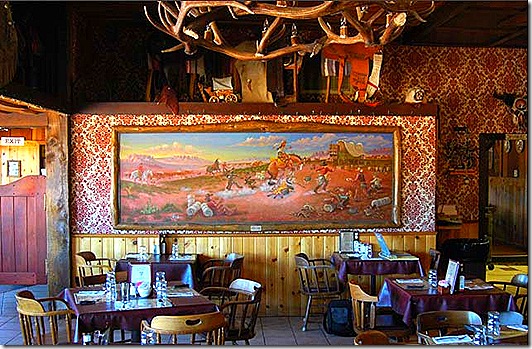 Greg and I had rib eye steaks, while Miss Terry and Jan choose the petite sirloins. I was pleased to learn that the food and service were both just as good as I remembered.  Greg, Jan, and Terry were all very happy with their meals also. When the waitress came by to inquire if we wanted dessert, we were all too full to say yes.

Back at the Elks campground, I worked some more on the new issue of the paper and then just before dark we decided that dessert wasn’t such a bad idea after all. So we all piled back in Greg and Jan’s truck and went to Dairy Queen!

Thought For The Day – When you harbor bitterness, happiness will dock elsewhere.

7 Responses to “Working Away”