Nick's Blog » We Have Visitors!

We have visitors! Yesterday afternoon our dear friends Greg and Jan White arrived at the Elks lodge campground here in Show Low, on their way south to Austin, Texas for the daughter Brandi’s wedding later this month.

We last saw Greg and Jan when we spent two weeks in Las Vegas with them in March, where we had more fun than four old farts should be allowed to. Greg and I agree that it’s probably a good thing that what happens in Vegas stays in Vegas.

While Greg was hooking up their utilities, Jan and Miss Terry went inside our motorhome so Terry could show Jan the new window blinds she installed. We’re not sure how it happened, but when they came back outside, our entry door got locked, and both sets of our keys were inside the RV. (Note to self – get a set of spare keys made and stash them in the Hide-A-Key box with the van key.)

Since we had the air conditioning on, all of the windows were closed, so I called Coach-Net, our roadside service provider. Coach-Net has bailed us out several times over the years, and I would not start the engine of our motorhome or van without their coverage. Our service package includes free lock out service, so I gave the nice lady at Coach-Net our information, and she dispatched an Atlanta Locksmith, telling me that they would be there in less than an hour.

But as it turned out, we didn’t need them. While I was on the telephone, my daughter Tiffany and her family pulled up, and son-in-law Jim found a window he managed to get open, then he boosted seven year old granddaughter Hailey inside, where she quickly opened the door for us. I was still on the phone with Coach-Net, so I told the lady to cancel the locksmith, and thanked her for her assistance. Then we profusely thanked both Jim and Hailey for their help.

After visiting for a while, Tiffany and Jim left, and by then it was dinnertime. We drove into Pinetop to introduce Greg and Jan to our favorite Mexican restaurant, El Rancho, where the food and service suitably impressed them. We had a great meal, and a good time comparing notes on our travels since we were last together.

The restaurant also has a catering service, and we thought the name was so funny that Terry took a picture of it. 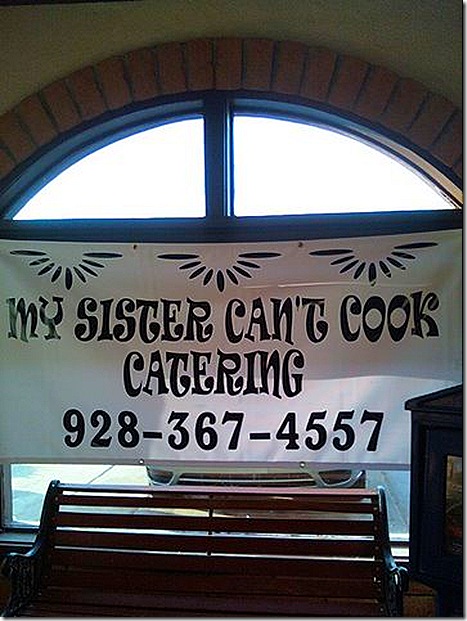 When Miss Terry learned that Greg and Jan were coming to Show Low, it gave her an excuse to make a batch of her delicious cinnamon rolls. No prepackaged mixes for her, my wife is a from scratch cook, and the night before, she made the dough and added pecans, then set them out in a pan in the refrigerator to rise overnight. After we got back to the campground and had time for our dinner to settle, she baked the cinnamon rolls, and the four of us stuffed ourselves all over again. They were wonderful! 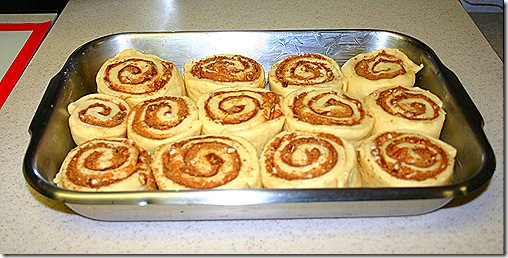 After our snack, we sat around visiting for a couple of hours. Here are Greg and Jan, and that’s my iPad he’s checking out. Great T-shirt, Greg! It sure is nice to have our friends here with us for a few days! 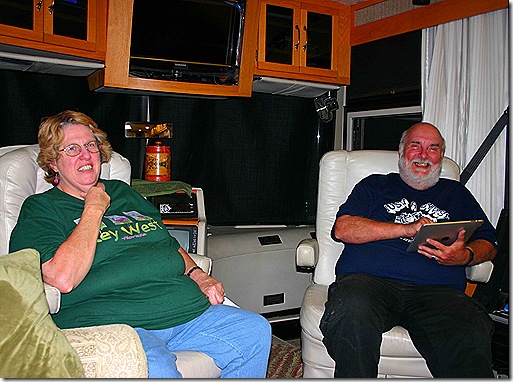 Before I leave you, I have to tell you about something funny that Tiffany shared with us. Do a Google search for the words Walmart Bingo and print out a couple of the game cards, then take them with you the next time you go to everybody’s favorite superstore. I wonder how many you can find in one shopping trip. Now, that’s as funny as the photos on the website peopleofwalmart.com!

Thought For The Day – Ask people why they have deer heads on their walls and they tell you it’s because they’re such beautiful animals. I think my wife is beautiful, but I only have photographs of her on the wall.

8 Responses to “We Have Visitors!”