Nick's Blog » The Blinds Are Done!

Yesterday Miss Terry finished installing the last of the new Levolor window blinds in our motorhome, and this last one came out just as beautifully as the others did! I am so lucky to be married to such a talented woman.

A few readers have written to ask if the blinds rattle going down the road. Since we haven’t been anywhere since Terry installed them, I can’t tell you for sure. But since they have attachments that are screwed to the wall that the bottom of the blinds slide into, they can’t move, so I don’t anticipate any noise from them.

It has gotten very warm here in Show Low, with temperatures in the low 90s predicted for the next few days. It’s even hotter down in the desert, where Phoenix is supposed to hit 110 on Sunday. Now that’s hot! People who live in the desert always say, “Yes, but it’s a dry heat.” Hey, it’s dry inside of an oven too, but I don’t want to live there either! I am a wimp when it comes to weather. I don’t like it too hot or too cold. Somewhere about 72 to 75 degrees is perfect for me.

We can tell its getting hot down in the desert, because the Elks campground is starting to fill up. There are a few RV sites left, and I hope there  is at least one still available when our friends Greg and Jan White come through early next week. Greg called to tell me they want to stop and see us as they head south to Texas for their daughter’s wedding later in the month, and we’re really looking forward to seeing them again.

I have been studying my mapping programs, trying to decide which route we will take from the Thousand Trails preserve in Morgan Hill, California to Vail, Colorado in mid-July for Terry’s son’s wedding. Morgan Hill is just south of San Jose, and I don’t see any good direct route to Colorado. It looks like we will either have to go north to Interstate 80 and take it east to Utah, then drop down to Interstate 70, or else south to Interstate 15, by way of Bakersfield and Barstow, and then Interstate 15 northeast through Nevada and Utah to pick up Interstate 70. This won’t be a sightseeing trip, we just need to get from Point A to Point B, so if anybody is familiar with that part of the country, I’m open to suggestions.

I got a lot of positive responses to Thursday’s blog on Canyon de Chelly, and I wanted to share one more photo from our trip to the canyon. I showed you a close up view of Spider Rock in that blog, but here is a wide shot of that part of the canyon, with Spider Rock near the center. This place took my breath away. 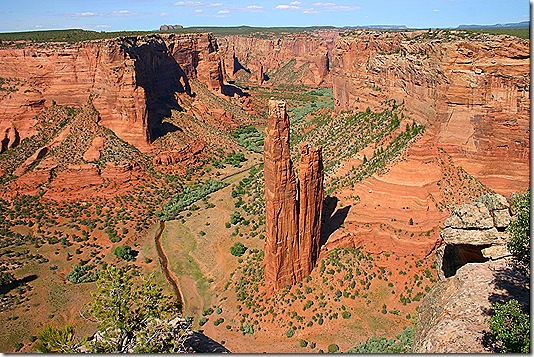 Terry’s folks, Pete and Bess Weber, are going to be up here spending the weekend in their motorhome at the Hon-Dah RV Park, so between visiting with them and working on the new issue of the Gypsy Journal, I’ll be pretty busy. We only have a little over a week left here in Show Low before we hit the road, and a lot to get done before we leave.

Thought For The Day –  Stop living in the past, it was not perfect either.

8 Responses to “The Blinds Are Done!”