After reading yesterday’s blog, RVing’s Top 10, my friend Connie Bradish suggested maybe we needed a Bottom 10 list, and suggested, in no particular order:

1. A major dumping event, like the hose comes off and it’s all over.
2. A tire blowout, especially if it’s the right front tire.
3. Being sunk up to your rear axles in a designated camping spot.
4. Being sunk up to your axles in a non-camping spot.
5. Dragging the tow car behind the RV because it’s still in gear.
6. Driving a back road, and coming up to a bridge with a 10 foot maximum clearance, you need 13 feet and you have to stop, unhitch and turn the coach around, all while blocking traffic.
7. Driving a road you shouldn’t be on, like the southwest road around Lake Tahoe in you big RV and tow car.
8. Having a husband and wife disagreement while backing into a site, accompanied by funny hand signals from one partner to another.
9. Having a pet get out, and you can’t find them.
10. Hitting a low rock, post or cone, or an overhang of a building or a tree, damaging your coach.

Connie admitted that she and her husband Pete have scored 10 out of 10 on this list. I think we’ve missed just one, which is having a pet slip out the door, never to be found. When Miss Terry’s cat, Sasquatch was still with us, he was quite the escape artist, but he never went far.

But 9 out of 10 on the Rock Bottom list isn’t a bad (or in this case, good) record. Less than a week into our fulltming life, we were camped in a fairgrounds in Torrington, Wyoming, on our way to Life on Wheels in Moscow, Idaho. We had the place to ourselves, so I had nobody but myself to blame when I pulled out of our site and turned too soon, swinging the back end of our shiny new Pace Arrow motorhome into the concrete pedestal that held the water and electric hookups.

I was just sick, and to Miss Terry’s credit, she didn’t shoot me, or even thump me with a rolling pin. Believe me, there was nothing she could have said to me that was worse than I was calling myself. I was still kicking myself three days later when we got to Moscow, where I met Dick Reed, founder of the RV Driving School. When I told him my sad tale of woe, Dick took my by the hand and led me to the back of the row where the instructors’ RVs were parked.

“Do you see the ding in that one,” Dick asked. “That belongs to Bill Farlow. Bill did that on a tree stump last year. This one here is Charlie Minshall’s rig. See that ding? Lord know what Charlie hit. And this one here, with the dented bumper belongs to…” By the time our tour was finished, I felt a lot better about my own mishap, and I had made a friend for life.

We’ve been stuck and we’ve been really stuck, and it’s never fun. This picture was taken at an RV park in Ohio a few years back. It had been raining for days, and we were nervous about pulling onto grass, but when we arrived, the park owner told us another bus had just left the same site. It must have been a Volkswagen bus, because our MCI promptly sunk up to its rear axle! 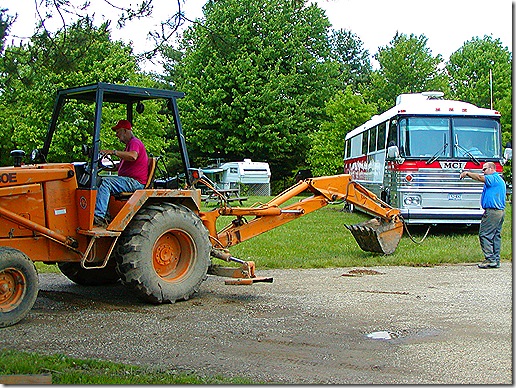 But anybody can get stuck in soft ground. In Bremerton, Washington, I proved that it is possible to drive a bus up a hill so steep that your front tires are on the pavement, and your rear bumper is digging into the pavement, but your drive tires are three inches in the air! 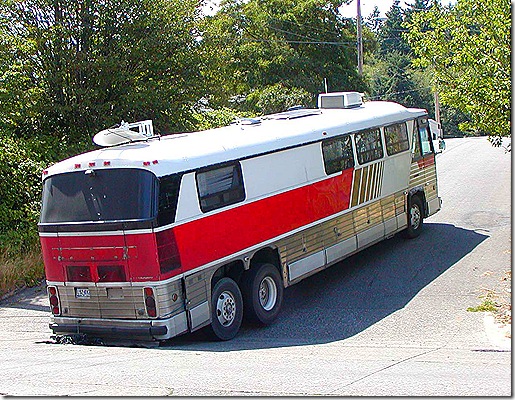 I also proved that while you can drive into that situation, you cannot drive back out of it! Getting out requires a very large tow truck, the police department to stop traffic, the fire department’s haz-mat crew to clean up the 36 gallons of radiator coolant that spills when the the tow truck cable snags a hose, and the local news crew. Did I mention I was going the wrong way up a one way street at the time? 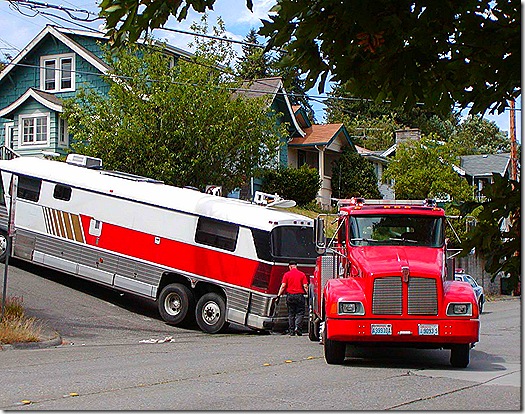 When all was said and done, I asked the police officer in charge of the scene how big a ticket I was getting, and he replied “What with the tow bill, the radiator coolant you need to buy, the hose you need to replace, and the roses you’ll need to buy your wife to make up for this, I couldn’t in good faith give you a ticket. I’m a married man too!”

I also remember driving out of one of our first RV parks, and how everybody waved at us as we drove past. I commented to Terry about how nice everybody was, and wave right back. It wasn’t until I got to the street and glanced in my rear view mirrors that I noticed that I had left all of our window awnings out. Of course, at that point there was no way I was going to stop and get out, so I just drove away, while poor MIs Terry hung out the windows unhooking the awnings as we went!

So yeah, I could easily do a Rock Bottom 10 – been there, done that, and a few more. How about you? What were some of your worst RVing goofs?

Thought For The Day – Time is what keeps everything from happening at once.