Nick's Blog » On To The Coast

We slept soundly Tuesday night, and when we woke up, our three neighbors had already left the Wasco Elks Lodge. We pulled out a little after 9 a.m., and took State Route 46, a narrow two lane road, west toward the coast.

At first the land was pretty flat, and we passed a large field of oil wells standing on both sides of the highway. 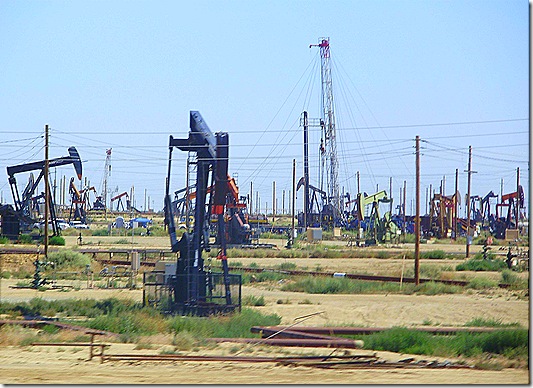 Then we started to climb up a series of steep golden hills, where the trees actually grew sideways! 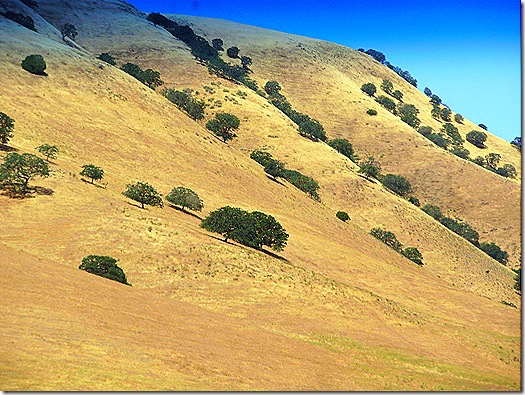 State Route 46 carries a lot of commercial truck traffic, and is supposed to be one of the most dangerous roads in California. It is well known for the number of serious head-on accidents that happen on it as impatient drivers try to pass long lines of traffic. 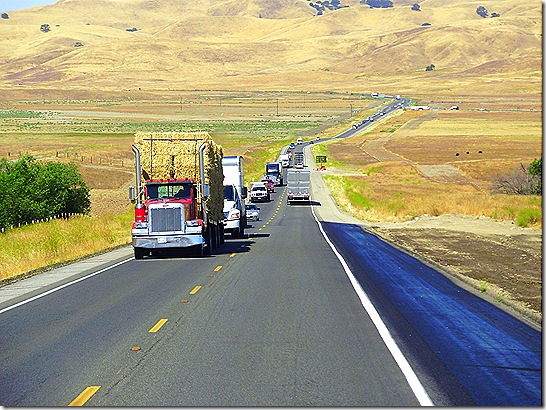 One accident on this highway that made history took place on September 30, 1955,  when teen idol James Dean smashed his Porsche 550 Spyder head-on into another car near Cholame. Today a small memorial near the accident site commemorates the tragedy. 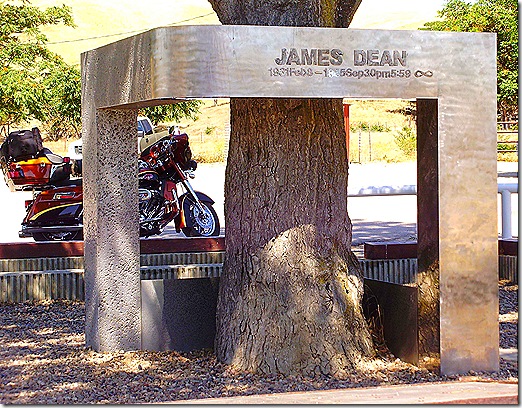 In Paso Robles, we got onto U.S. Highway 101 southbound, a busy divided four lane highway. In San Luis Obispo we passed the Madonna Inn, which has over 100 rooms, all decorated in a different theme, ranging from the Caveman to the Golfer’s Room, to an African Safari, as well as the frilly Dot and Daisy Room. I love my Winnebago, but there are a couple of rooms there I’d sure like to see! 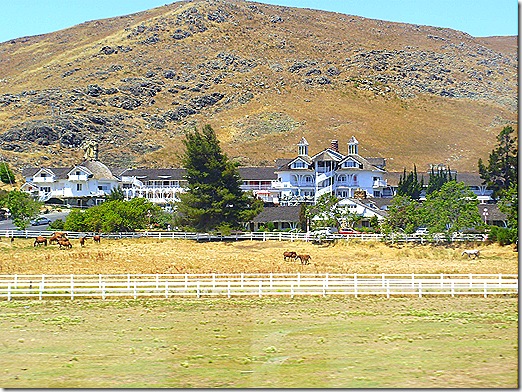 We followed this tanker truck for several miles, and Miss Terry took a picture of our motorhome’s reflection in it. 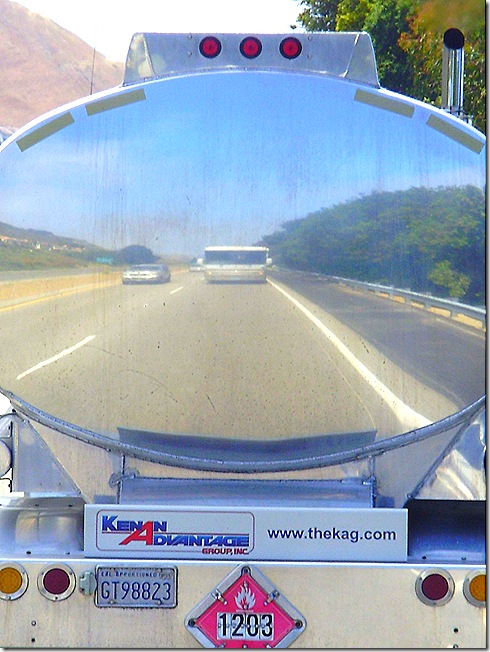 A few minutes before noon, we arrived at the Oceano Elks lodge, where we we will be for the next five or six days. This was an easy driving day, only 128 miles. The Elks campground is pretty tight, though at this time we don’t have anybody on either side of us. 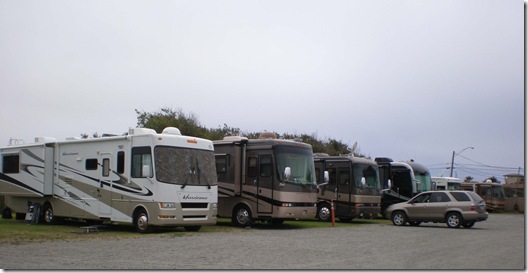 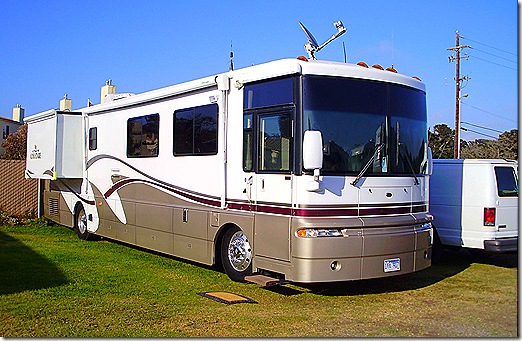 The cost is $20 a night for 30 amp electric and water, and there is a dump station. Considering that the cost of many area RV parks is over $45 a night, it’s a good deal. And here is a Google Earth view of where we are. Our RV is parked where the yellow push pin is, and we can walk to the beach! Location, location, location! 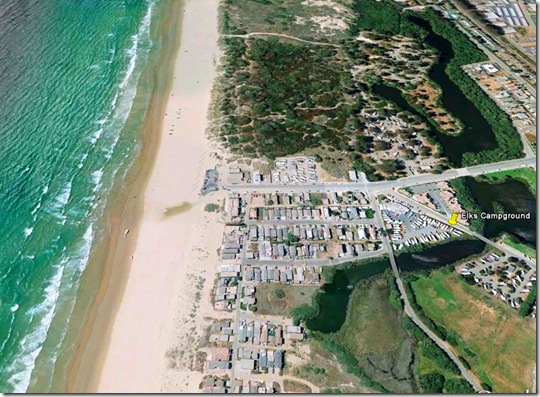 The central coast is experiencing what the locals call June Gloom, a period where daytime temperatures are only in the low to mid-60s, and heavy cloud cover hangs low over the hills. But when we drove to Pismo Beach, after getting the RV parked and hooked up, there were a lot of folks enjoying the water. The sun came out soon after we arrived, and the clouds you see in this picture began to burn off. 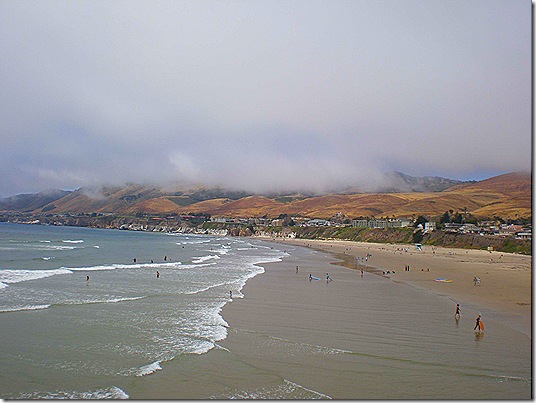 I love the pier at Pismo Beach, and we walked out on it to watch the people fishing. We met this pair of pigeons, who were busy with their mating ritual. The male would puff himself up and strut in front of his girlfriend, then run around behind her. I don’t know if you can see it in this photo, but he sure had a determined look on his face! But she was having none of his nonsense, and easily escaped his nefarious clutches. Being a typical male, after he struck out a time or two, he quickly ran off and found another lady bird to try to impress. 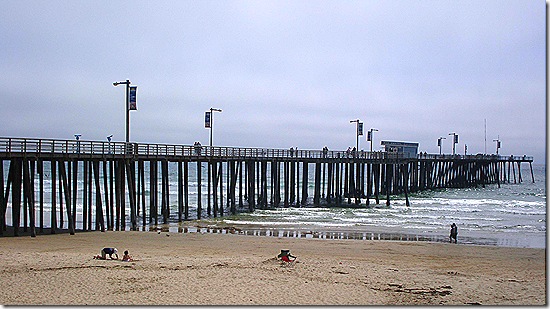 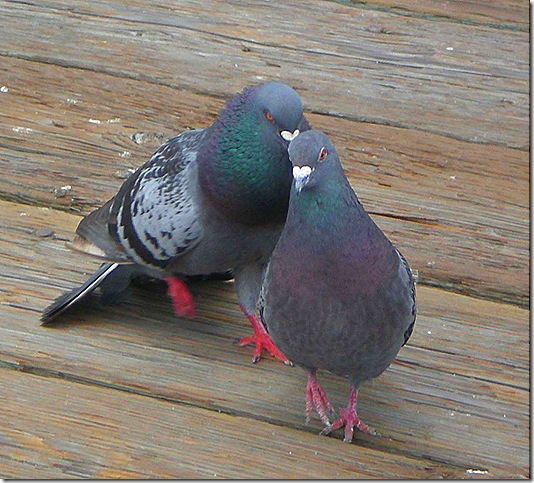 We also came across this pelican, who was busy mooching a fish one of the anglers had caught. He didn’t seem to like me or my camera, and every time he saw me, he spread his wings and let me know he didn’t like having his picture taken. 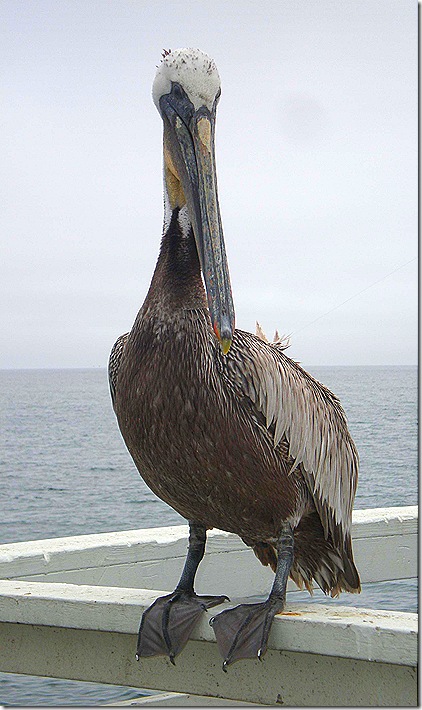 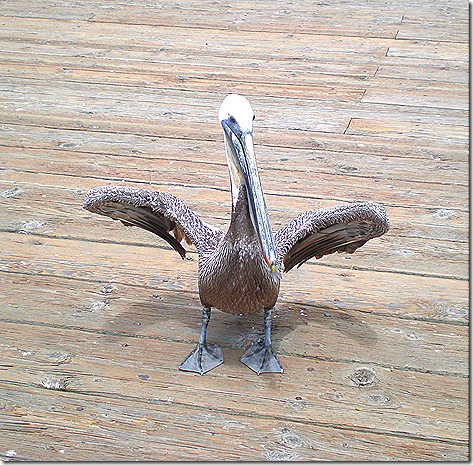 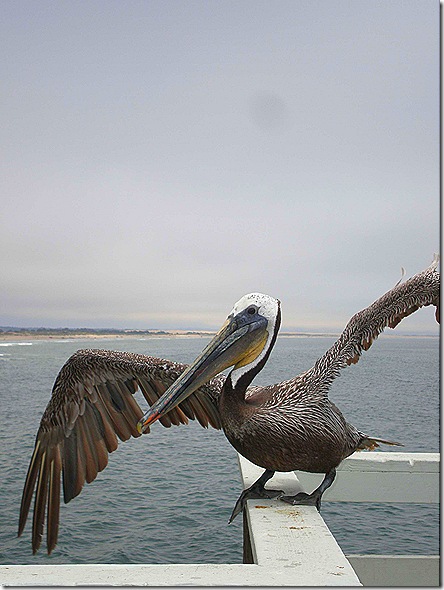 They sure stack the houses up close together here on the California coast! 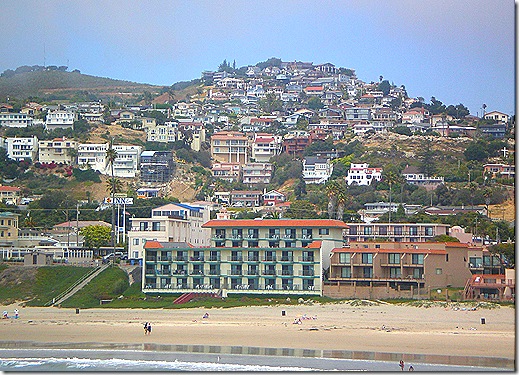 Now here’s a great car for going to the beach. The fellow who owns this 1947 Ford Woody wagon told me he restored it himself over 25 years ago! How cool! 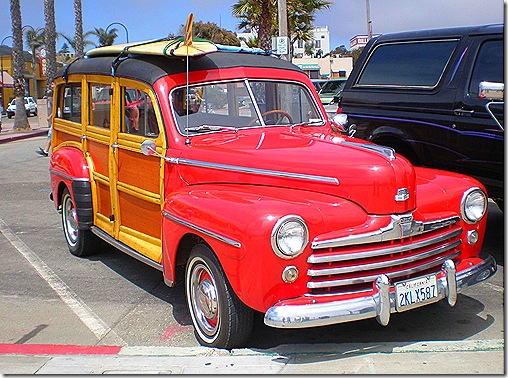 These two ladies had their own method of transportation! 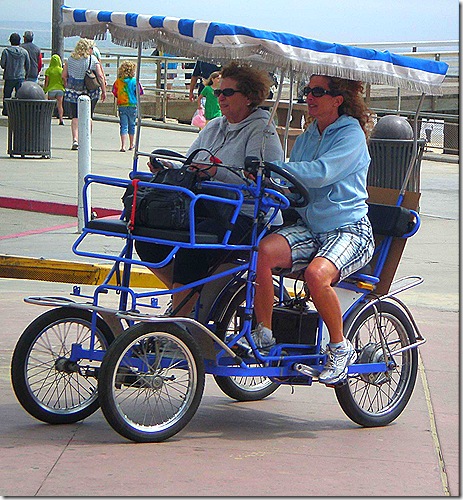 We poked around Pismo Beach for a while, had linner (that’s either a late lunch or an early dinner), then stopped at a Von’s grocery store to pick up some items before we went back to the  motorhome.

We were both still pretty tired from the long drive from Arizona the day before, so we had a quiet evening at home, answering e-mail, watching TV, and catching up on paperwork.

We love it here on the central coast, and we’re looking forward to spending a few days just goofing off. We need the break.

Thought For The Day – By the time a man realizes that maybe his father was right about some things, he usually has a son who thinks he’s wrong about everything.