I have just two things to say about our visit to Canyon de Chelly National Monument – “Awesome!” and “If you have never been to this natural wonderland, put it at the very top of your travel plans NOW! You won’t regret it!”

I have been to the Grand Canyon and the Salt River Canyon, I’ve seen Canyon Diablo, and a lot of other natural wonders of the Southwest, and in my opinion, none of them are as impressive as Canyon de Chelly! I only wish I had discovered this magical place years ago.

Canyon de Chelly (pronounced d’Shay) is located at Chinle, Arizona, on the Navajo Indian Reservation, and has been inhabited by native peoples for nearly 5,000 years. At the canyon’s mouth, the colorful rock walls are only 30 feet high, but deeper in the canyon, the cliffs tower over 1,000 feet above the valley floor. 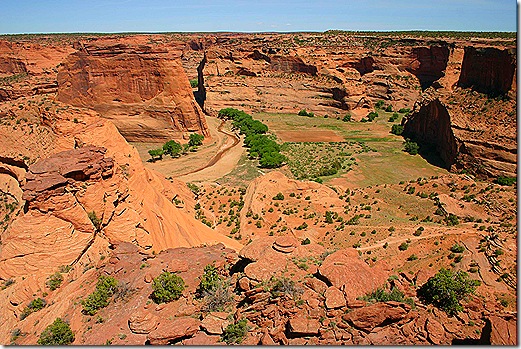 We had been advised not to take our 40 foot motorhome to Canyon de Chelly, and I’m glad we didn’t. There are two campgrounds, one the free Cottonwood Campground, which is best suited for small (under 30 feet) RVs, though we did see a couple of larger rigs that had somehow managed to squeeze in. But between the small spaces, tight turns, and trees close to the roadways, there is no way I’d take our motorhome in there. 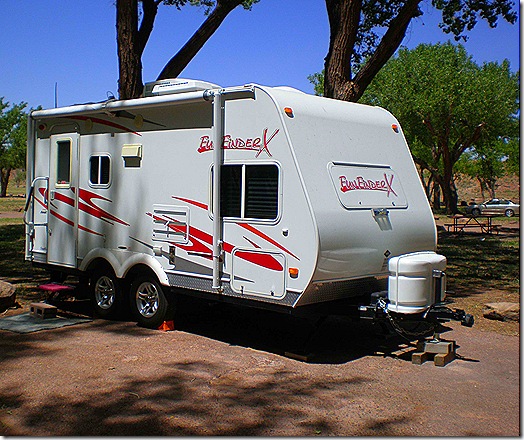 Spider Rock Campground, about nine miles from the National Park Service Visitor Center, is privately owned, and it looked pretty run down to us. About the only amenities you’ll find there are lizards, porta-potties, and dry camping

We left the motorhome in Show Low and drove our van to Canyon de Chelly, and after a stop at the Visitor Center, we took the seventeen mile long South Rim Drive, which offered seven overlooks, each one more magnificent than the one before. Each overlook gave us a different perspective on the canyon. Our first stop was the Tunnel Canyon Overlook, which gave us nice views of the canyon, which is very green year around due to the river that flows through the bottom of the canyon. 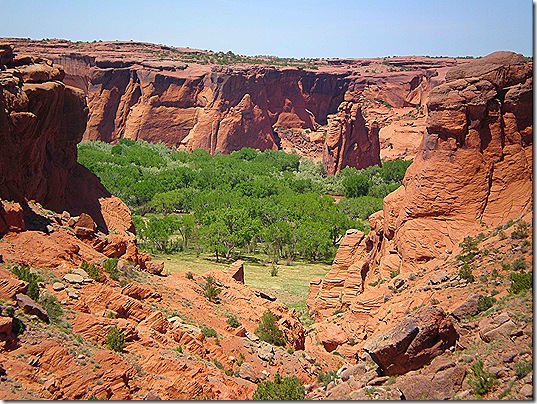 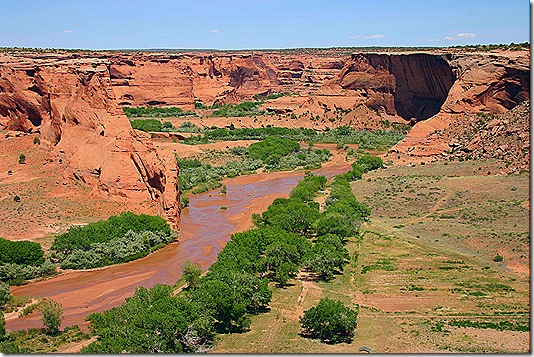 At our next stop, Tesgi Overlook, we saw this farm, which is owned by a Navajo family who lives in this dramatic wonderland. Can you imagine what it would be like to wake up to these kinds of views every day? 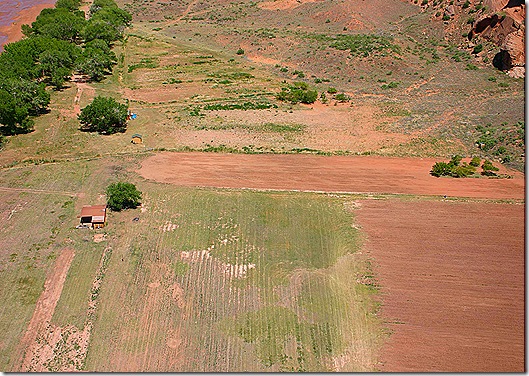 Further along the South Rim Drive, at the White House Overlook, we took this photo of these ancient Indian ruins that date back to 1060 A.D. Archaeologists say that at one time the ruins had over 80 rooms, though only about 60 remain today. 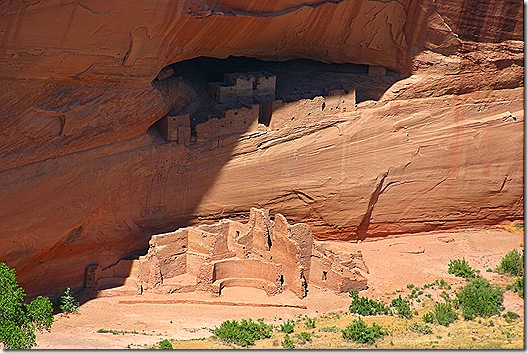 It is very had to choose just one, but if I had to pick, my favorite view in Canyon de Chelly is of magnificent Spider Rock, which towers over 800 feet from the canyon floor. This rock formation is sacred to the Navajo people, who say that Spider Woman lives on top of the rock, and it was this deity who taught the first Navajo women to weave, creating a tradition that has been passed down from mother to daughter for generations. 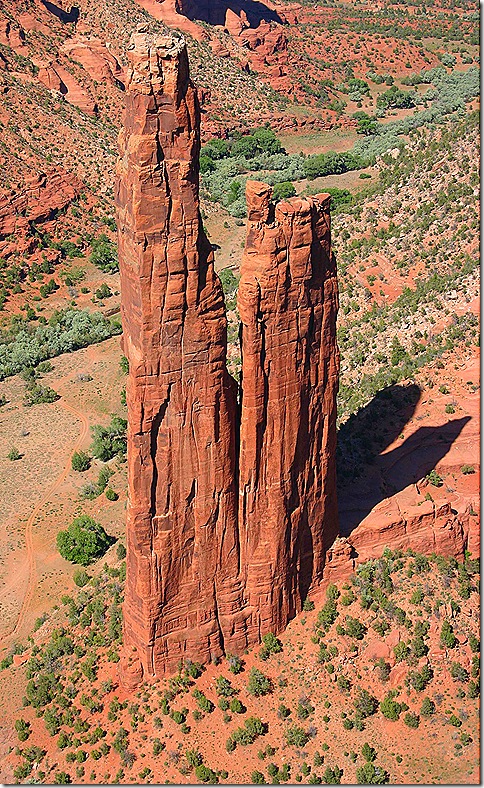 Navajo mothers tell their children that if they misbehave, Spider Woman will carry them away and take them to the top of the rock spire to live until they learn their lesson.

I wish I had room to show you all of the wonderful photos we took at Canyon de Chelly, but there are just too many. And it doesn’t matter, because the photos just don’t do this natural wonder justice. You have to see it for yourself to believe it! 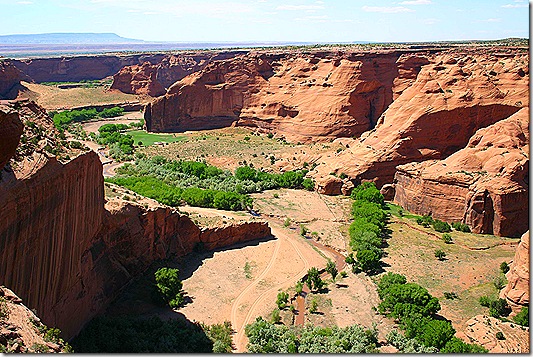 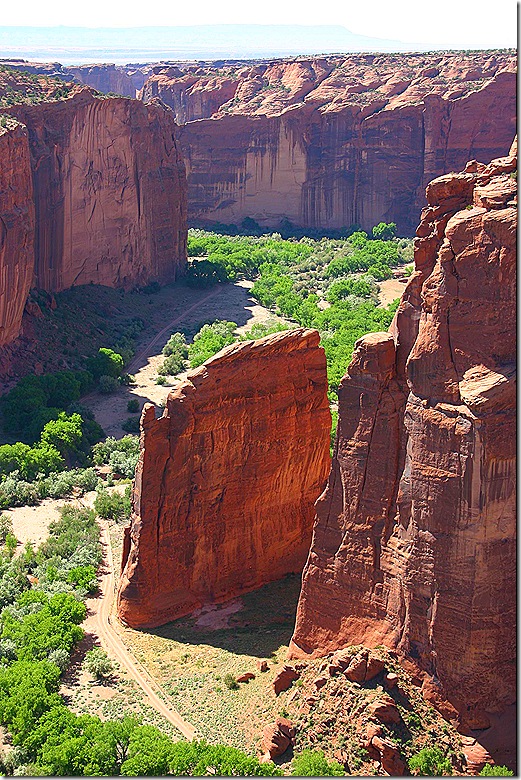 In tomorrow’s blog I’ll tell you about our visit to historic Hubbell Trading Post, another Navajo Reservation landmark.

Thought For The Day –A good traveler has no fixed plan, and is not intent on arriving.