Nick's Blog » A Day At The Beach

In spite of the fact that it was windy and chilly yesterday, we just couldn’t stay inside when we were this close to a beach. We started out by dropping off bundles of sample issues of the Gypsy Journal at some of the local RV parks between Oceano and Pismo Beach. They sure cram a lot of RVs into small spaces here on the central California coast, where land is at a premium!

Then we spent some time walking out on the Pismo Beach pier, stopping to watch surfers trying to catch just the right wave. Those kids have more energy than common sense! That water sure looked cold! 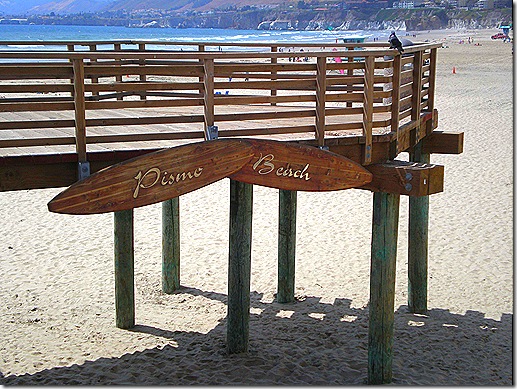 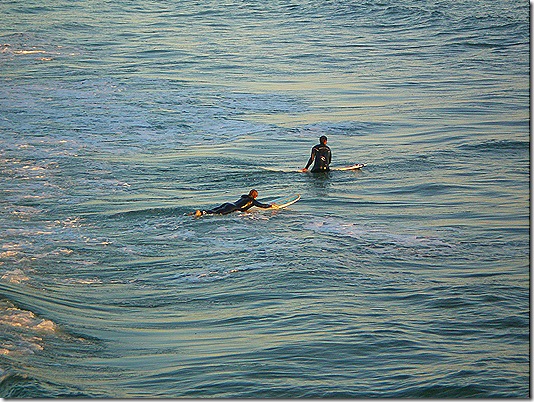 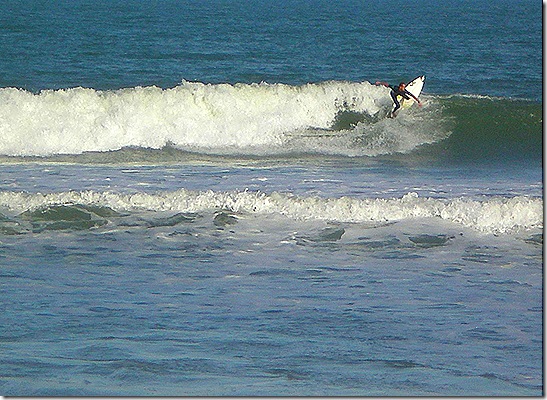 Further out the pier, there were a few folks fishing. No license is required, and you can rent a rod and tackle from a vendor on the pier.

As much as we enjoyed the pier, the cold wind drove us off after a half hour or so. We did some browsing at the shops along the waterfront, then drove to a used book store in Grover Beach, where the pickings were slim.

Blog reader Levonne Gaddy had suggested we try Mama’s Meatball, a block or two from the Elks lodge campground, for pizza, so we stopped there and it was very good. The crust was super thin, but the blend of cheeses was delicious.

The Oceano Dunes State Vehicular Recreation Area is within walking distance of the Elks campground, but we chose to take the van and stay out of the wind. We parked near the entrance to the fee area and spent the afternoon watching all of the activity on the beach. We love people watching, and a day at the beach can be more entertaining than an afternoon matinee. 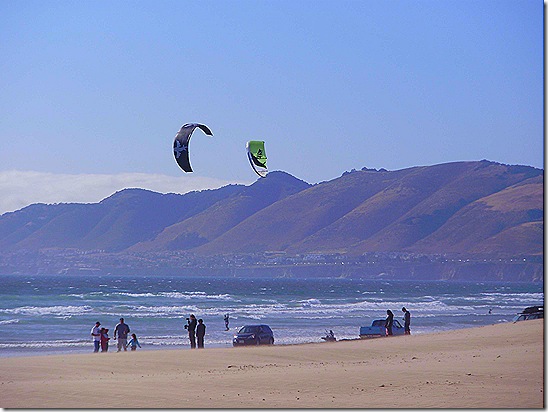 This is one of the few places where you can drive on the beach, and people come here from hundreds of miles away to drive 4x4s, ATVs, motorcycles, and even family cars on the sand. 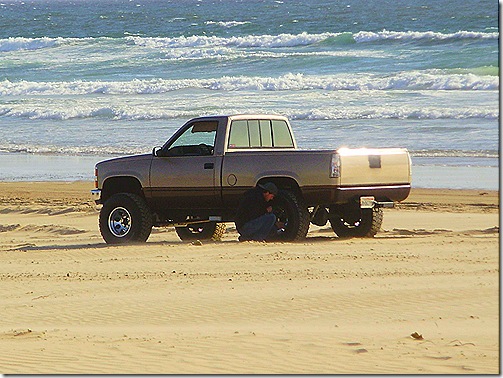 If you drive on the hard packed sand, you are usually okay, but if you get stuck (and a lot of people do), the local tow trucks are equipped to pull you out, for a price. 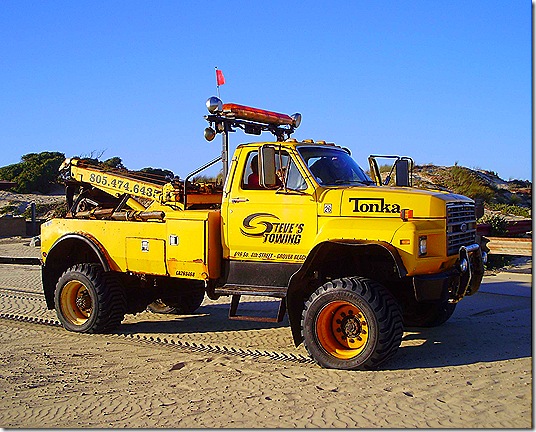 Some folks get carried away having fun and get stupid instead. This is the end result when that happens. Whoever was in the cab of this truck must have had a terrible headache, if not worse. 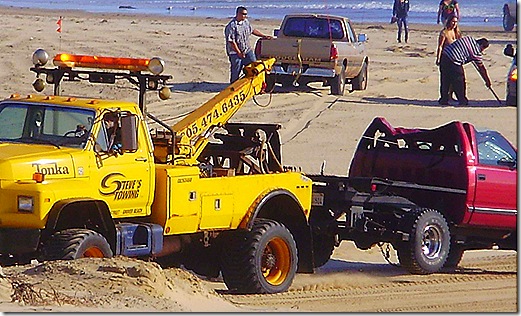 You can even camp on the beach, and though we would not have considered bringing our Winnebago out there, we saw a lot of RVs coming and going. 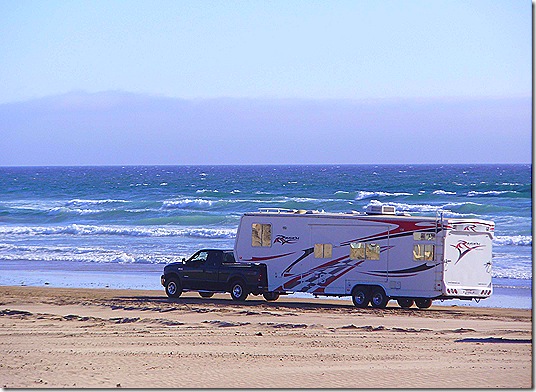 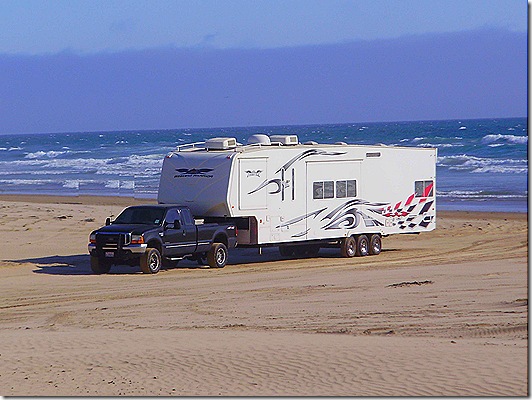 If you get your fifth wheel or motorhome stuck here, you’re really stuck! 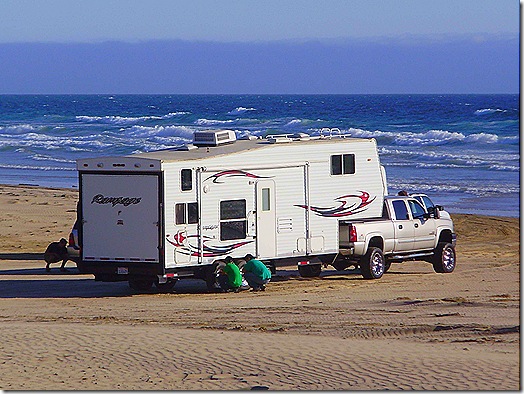 Some people choose to get back to the basics when it comes to horsepower. These may not be the most comfortable ride on the beach,  don’t at least they get stuck very often. 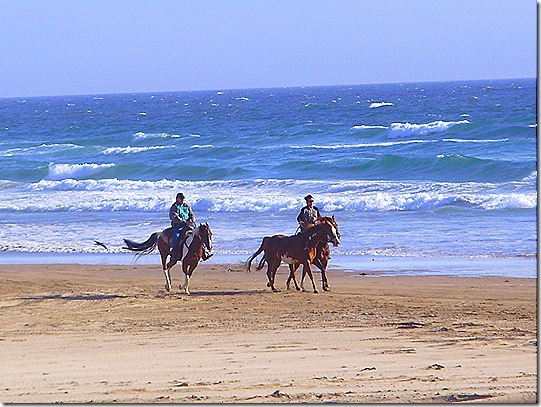 We also watched windsurfers zipping up and down just offshore. It must take a lot of arm strength to hold onto those things! 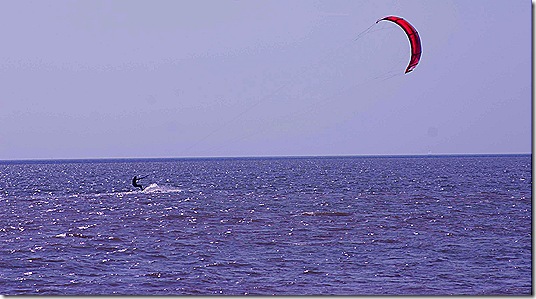 Some of the acrobatics they were doing were fascinating! 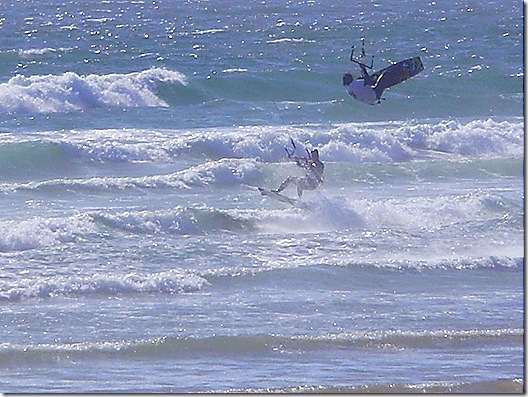 We returned to the Oceano Elks campground about 7:30 p.m., and the place had really filled up while we were gone! I don’t know how they squeeze so many RVs into such a small campground, but like I said, space is at a premium on the coast.

We spent the rest of the evening inside, not doing much of anything. It was a wonderful, relaxing day, in spite of the wind and cold, and we are feeling more relaxed than we have in months. We really needed this time. We love our family and friends, and we cherish being with them. But sometimes we just have to have some “us” time, away from everybody. It’s our special reward to ourselves.

Bad Nick has been lazy lately, and we haven’t heard much from him. But yesterday while we were out playing beach bums, he was at the computer posting a new Bad Nick Blog titled What About Them? Check it out and leave a comment.

Thought For The Day – The things that come to those who wait may be the things left by those who got there first.

6 Responses to “A Day At The Beach”