Nick's Blog » Wayzalot Is No More

Last year I posted a blog about a visit that the Tin Can Tourists paid to the RV Hall of Fame Museum in Elkhart, Indiana, and included several photos of the vintage and homebuilt RVs the club members own.

One of my favorites was this beautiful  cedar sided fifth wheel, named Wayzalot. The unique RV that Hardy and Terry Evans built included more features than I can list here, but you can read about the entire construction process on the Evans’ Wayzalot website. The towed their RV to Tin Can Tourist events all over the country. 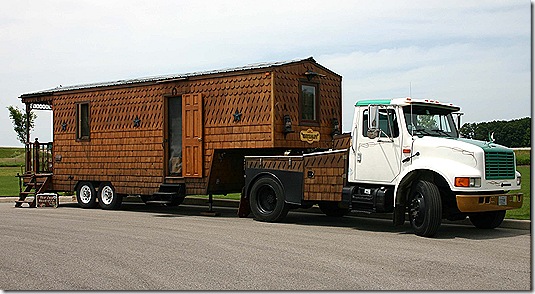 I wrote in that blog post that I would have liked to see the inside of Wayzalot, but now that will never happen. A few days ago Hardy and Terry were southbound on State Route 65 in Jeffersonville, Indiana, headed for a Vintage Camper Rally in Tennessee. Just before they crossed the Ohio River, a tanker truck ahead of them braked hard. Hardy managed to stop his rig before he hit the tanker, but then an eighteen wheeler slammed into the rear of Wayzalot.

The impact pushed the Evans’ truck and trailer into the concrete median, totally destroying both units. It was a huge accident that tied up the highway for hours. Fortunately, even though they lost their truck and beloved home on wheels, the only injury the Evans’ suffered was Hardy’s ankle, which was broken in two places. 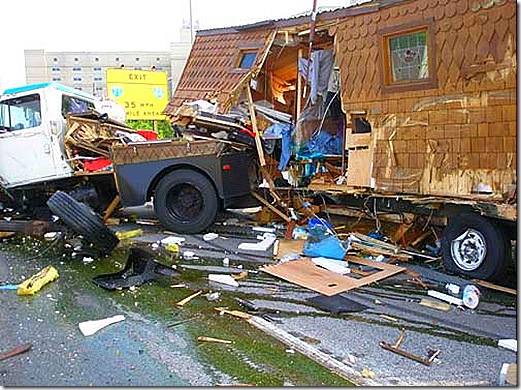 These photos show the horrendous damage to both the Evans’ truck and trailer. It’s a wonder they escaped alive! Having built our own bus conversion, I know how many hours, and how much blood, sweat, and tears went into the project. 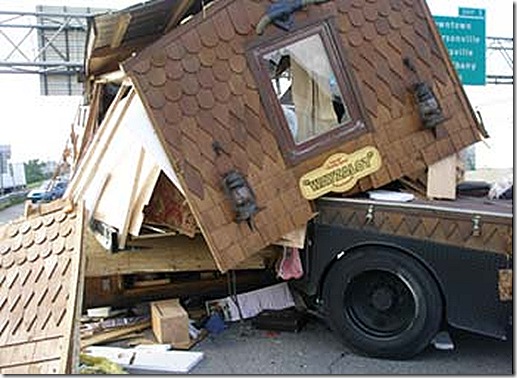 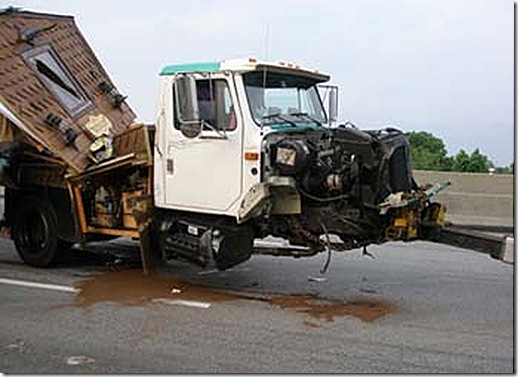 Terry said they had traveled several months a year in their RV for the last ten years, covering over 50,000 miles in over 25 states. Now all they have left are photographs and memories. You can see more pictures of the accident on their website. Folks, it can happen to any of us, at any time, no matter how careful we are. Cherish every day and every mile you travel.

Speaking of travel, my pal “Froggi” Donna McNicol clued me in to a new iPhone app called State Lines that every RVer can use. It includes information on things like state gun laws, rules on sleeping overnight in rest areas, state sales taxes, rules of the road, and lots more. The app updates as you travel, so you always have information for wherever you happen to be. In the coming weeks, the app will be updated for the iPad as well. I plan to get it real soon, because I can see a lot of times when it would be invaluable in our travels.

I mentioned in yesterday’s blog that there is a noticeable slowdown in service on my iPad here in Show Low, away from AT&T’s 3G system. While we have high speed EVDO 3G service on our Verizon cell phones and air card, the iPad is on AT&T’s slower Edge system.

I did some speed tests last night, and here are the results: My desktop computer, operating off the Verizon air card and Cradlepoint router, showed download speeds of 1.73 MB and upload speeds of .43 MB. The iPad, on the AT&T Edge signal, showed .06 MB download speeds, and a dismal .007 MB upload.  As slow as that sounds, I have been able to get online and do whatever I have wanted to, including opening websites with lots of photos. I don’t know if that is due to the iPad’s own speed over my computer running Windows XP Pro, which seems to be pretty fast under most circumstances. When I switched to our WiFi signal, the iPad showed 1.30 MB download and .16 MB upload. Still not as fast as my desktop computer, but more than enough for my needs. Even on the Edge service, the iPad is still faster than I was getting a lot of times on my computer and air card in Apache Junction back in January and February. I’m very pleased with the iPad and its performance.

Yesterday I showed it to a friend who has never used a computer and who has always said he has no interest in them. Five minutes with the iPad had him asking me where he can get one! Contrary to what the naysayers claim, I’m convinced that this gizmo is going to make a major impact on the way people get online and access media. Now if it would just let me win at Scrabble once in a while!

Thought For The Day –The main reason Santa is so jolly is because he knows where all the bad girls live.

5 Responses to “Wayzalot Is No More”