Nick's Blog » Much Ado About Nothing

I spent most of yesterday busily doing nothing, and managed to get most of it done.

Don Bingham, a faithful blog reader and newly retired Apple employee, contacted me to congratulate me on my new iPad and to tell me that he wanted to present me with three great apps; Apple Pages, Numbers, and Keynote, which are word processing, spreadsheet, and presentation programs, respectively. These will really help me get the most out of my new iPad, and I appreciate your generosity, Don.

The only problem was, for some reason, when I tried to download the programs directly to my iPad from the online Apple Store, I kept getting an error message. Eventually I downloaded them to my desktop computer, and then transferred them to the iPad, along with Scrabble, the iPad version of the popular board game. I also downloaded my iPod music library to the iPad.

Well, why have a new game if you don’t play it, right? So there went most of the afternoon. As it turns out, for a wordsmith, I really suck at Scrabble. The computer knows words I never heard of. I managed to beat the game a few times, but it pretty much cleaned my clock every time.

I did tear myself away from my new toy long enough to go up to the office to pay for two more days to extend our stay here at Happy Days. Or at least I tried to. As it turns out, the office is closed on the weekends, so I left them a message that we will be leaving Monday, and will catch them before we take off.

I also called Camping World in Mesa to complain that ever since we got our new tires installed, the end of February, I have been having problems with both inside duals. They are losing air, and giving false readings on my PressurePro tire monitor. The consensus of Mike McFall from PressurePro, and other experienced tire people, is that when they installed the valve stems, they either screwed the extenders down too tight and collapsed the small washers inside of them, or that the valve extenders themselves are bad. After some discussion with the service manager at Camping World, he acknowledged that they have had problems with their valve extenders in the last few weeks. So we have an appointment with them first thing Monday morning to hopefully remedy the problem.

I may have been a couch potato most of the day, but not Miss Terry. That lady is always busy doing something. Her sister Lisa had invited us to dinner, so Terry made up a big batch of refried beans to go with the tacos Lisa was preparing, and while they were cooking, she installed the new Levolor wooden blinds in the bathroom, in place of the original metal mini blinds. We are replacing all of our window coverings with the Levolors, and this was the first one so far. I think they look very nice, don’t you? 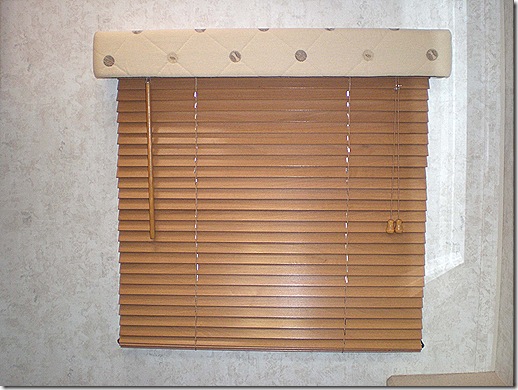 We went to Lisa’s at 4 p.m., and she and husband Jim made us feel welcome, then stuffed us with delicious food as we had a fun evening together. We don’t get to see enough of Jim and Lisa, because they have very busy schedules, so it is always a treat to get together with them when we are in town.

Back at the motorhome, I parked myself back on the couch and attacked the Scrabble game again, because I’m nothing if not persistent, and lazy. The game beat me three rounds out of four, so I finally gave up and did something productive instead, moving to the far end of the couch and giving Miss Terry her nightly foot rub. I have to do something around here to earn my keep!

Thought For The Day –A balanced diet is a cookie in each hand.

16 Responses to “Much Ado About Nothing”