Did I mention that I really, really hate getting up early in the morning? I’ve never been a morning person and never will be. I have never minded working long hours, I just always wanted the night shift, not the morning shift. But I was still awake at 6:30 a.m. yesterday morning. That’s two mornings in a row when I was up with the roosters. Will the madness never stop?

The guys at RV Renovators were on duty at 7 a.m., and they had one heck of a job getting the Norcold refrigerator in our Winnebago Ultimate Advantage loose enough to tilt forward so they could do the recall upgrade. Miss Terry had to empty the unit before they started working on it, and it’s a good thing she did, because judging by this picture it all would have been in a big jumbled mess otherwise. Fortunately, RV Renovators had a refrigerator and a separate  freezer that we could store everything in to keep it from spoiling. 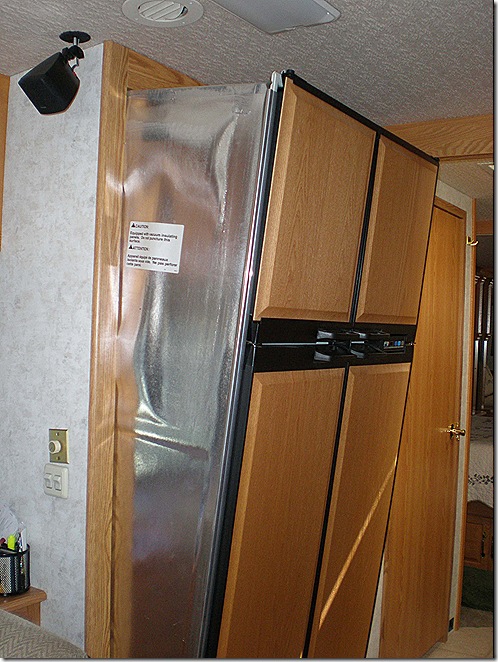 The techs had to almost crawl inside the access panel opening in the side of the motorhome to get the job done. By late morning they had the upgrade finished, and we started putting everything back inside the refrigerator. Then Miss Terry noticed a problem. The refrigerator would not ignite on propane, and kept giving us an error message. Oops! Now what? 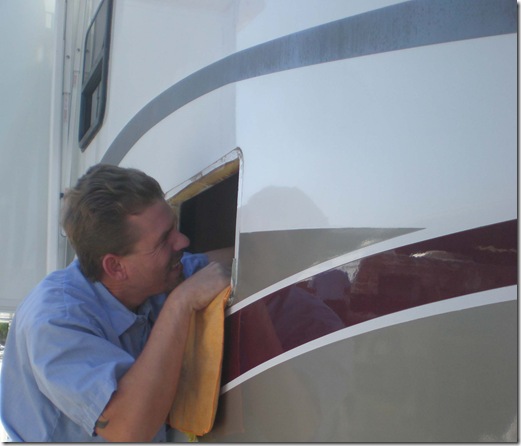 A couple of techs tried to diagnose the problem without success, so they called in Bob, the “old timer” at RV Renovators. It only took a few minutes for Bob to figure out that the air tube directly over the burner was full of crud, and with all of the jerking and pounding to get the refrigerator out, some of it had fallen down and blocked the gas valve. They cleaned it out, and voila, the propane fired right up and we were in business.

For most of our many years as fulltimers, we have had a residential refrigerator, so there is a learning curve to RV refrigerators that we are still working on. Bob told me that the refrigerator burner air tube should be cleaned every year to prevent this kind of problem. I didn’t know that, did you?

With that problem out of the way, we were ready to go. I would feel confident in recommending RV Renovators to anybody in need of RV service or repair. They took very good care of us, and we will call on them any time we’re in Arizona and need work done. Thanks Cinda, Jesse, Bill, Bob, and everybody else for all of your great service.

From RV Renovators, we drove a few miles east to Apache Junction, where we took a site at Happy Days RV Park, a nice Passport America campground with 50 amp full hookup back-in sites on gravel, with a concrete pad at each site. The place is pretty empty, but we’re only going to be here a few days while we visit with Terry’s parents.

Once we were hooked up and settled in, we drove to their house and spent some time with them. It’s always nice to have family time. By then it was late in the day, and we were both pretty hungry, so we hit our favorite Chinese buffet in this area, #1 Eastern Super Buffet. Even though we don’t live here, we’ve been there so many times during the last two winters that the staff knows us when we go in. I would rate it up with the top four or five Chinese buffets we have found nationwide.

Between two nights with little sleep, and getting up early, along with a full tummy, by the time we had finished eating, I was barely able to keep my eyes open. Terry drove back to the campground, and we had a quiet night watching TV, I wrote my blog, and we were in bed early. Or at least early for us, anyway.

Thought For The Day – There is no shortcut to anywhere worth going.