Nick's Blog » From Cacti To Ponderosas

Yesterday morning bright and early I was parked at the Camping World in Mesa, Arizona letting their service people know that I was not pleased with their installation of our new tires in February, and that I wanted them to replace the valve stems and the valve stem extensions on both inner dual wheels.

Ever since we bought the new tires, both inside duals have lost air and given false readings on my PressurePro tire monitor. Several people whose opinion I respect, as well as the service manager at the Camping World, all agreed that the problem was either that the valve stem extensions they installed were bad, and/or that they had crushed the small O rings in the valve stems when they screwed on the extensions. 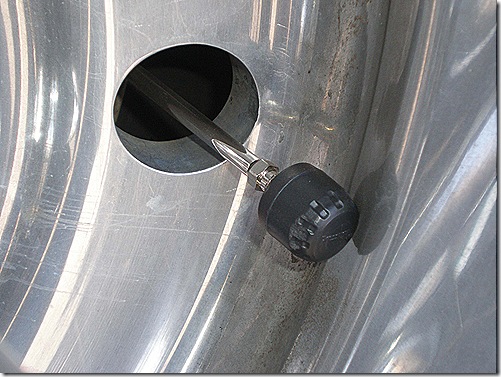 Finally, at 11:30, I was really ticked off, so I tracked down a service manager and told him I wanted the job done now! I guess he lit a fire under the service tech, because about noon he finished the job and pulled the motorhome out, and we hooked up the van and took off.  We spent almost $4,000 at this Camping World on new tires and house batteries, and between the fact that they never tightened the battery cables down on the house batteries, they screwed up the first valve stems on both inside duals, and then the hassle getting the valve stems replaced yesterday, I won’t be in any hurry to go back there for service, or to recommend them to anyone.

From Camping World we started up State Route 89, known locally as the Beeline Highway, toward the high country. As many years as I have spent in Arizona, the state’s topography still amazes me. In two hours of driving time, we went from cacti covered desert, where it was in the upper 90s, to thick forests of Ponderosa pine trees, and temperatures in the low to mid-70s.

One of our regular blog readers asked if I could show some photos of the trip today, so Miss Terry was clicking away with her digital camera. We started out passing tall saguaro cacti, with beautiful white flowers on them.  Saguaros have long life spans, they take up to 75 years to develop one of their arms, and can live 150 years or more. 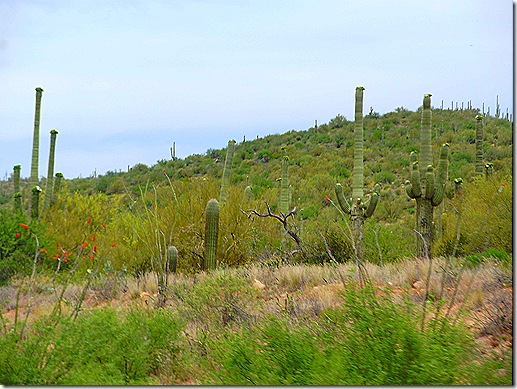 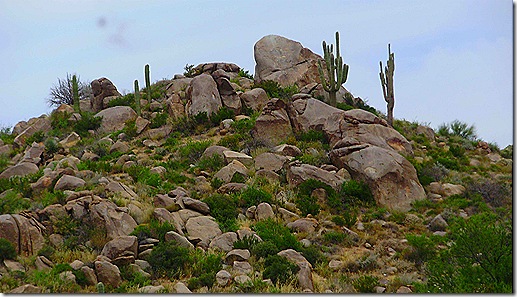 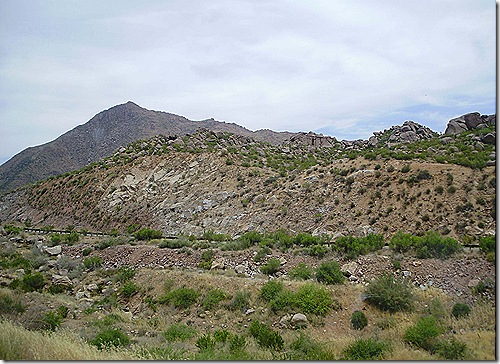 State Route 87 is a good divided four lane highway between Mesa and Payson, 75 miles to the north. The road has a lot of curves, and a lot of 6% grades, both up and down. When we drove this route to Show Low a couple of years ago in our old MCI bus conversion, we were running hot all the time, and creeping along at 10 miles per hour in some places. 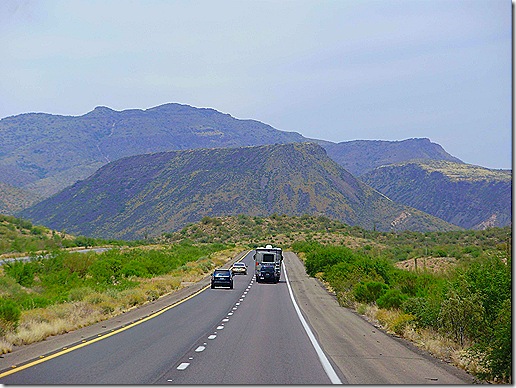 This trip, in the Winnebago, we dropped down to 35 miles per hour on a couple of steep climbs, but averaged over 50 most of the time. However, I will say that I felt a lot more confident with the Jake brake in our bus than I do with the exhaust brake on the Winnebago. It did a much better job of keeping our speed down on those steep downhill grades. 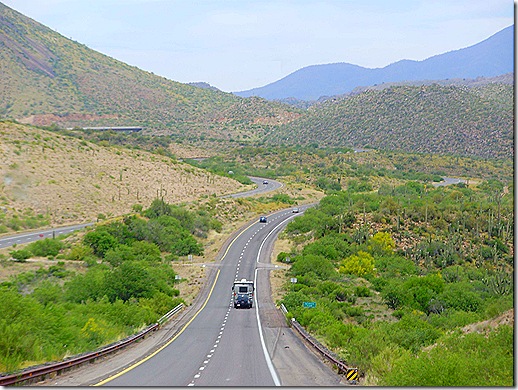 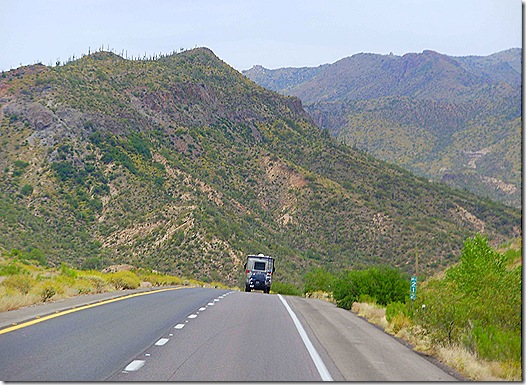 A few miles south of Payson, we passed this huge bicycle junkyard. I’ve driven by this place for years and always wanted to stop. Someday I will. 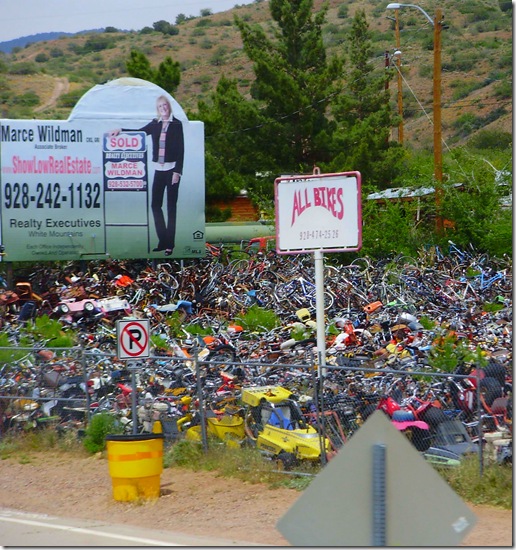 When we hit Payson, we transitioned very quickly from desert to pine trees. In Payson we got onto State Route 260, which would carry us across the Mogollon Rim and on to Show Low. This picture was taken two hours after we were driving past saguaros. 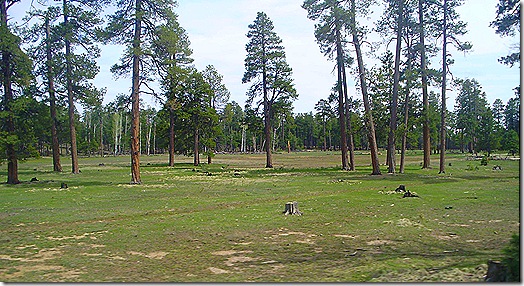 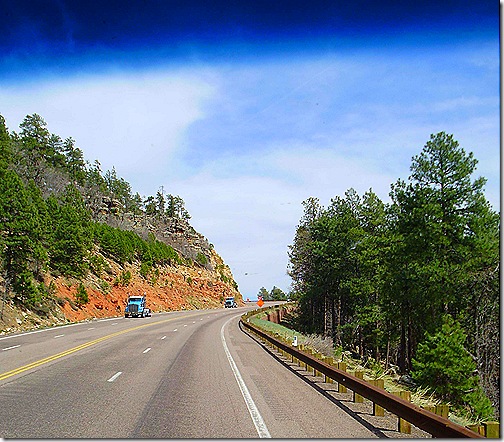 Once we topped out on the Rim, this rest area makes a good place to pull over for a break, and offers some great views down the Rim. 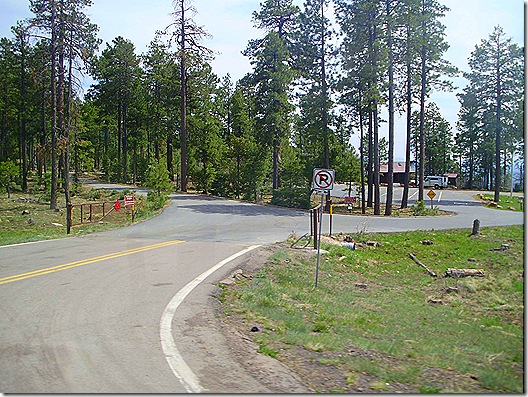 A lake in Arizona? Actually, the Mogollon Rim and White Mountains are covered with small lakes that offer excellent fishing opportunities. 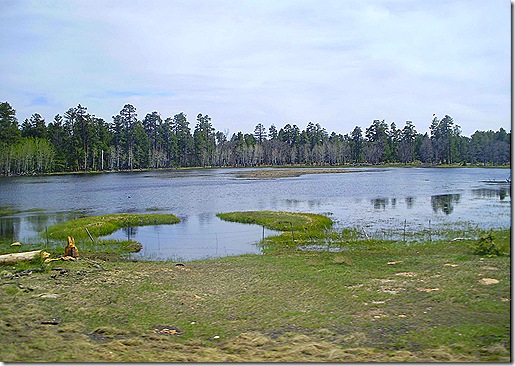 Now we were driving through a beautiful forest. To me, this is one of the prettiest places in Arizona. 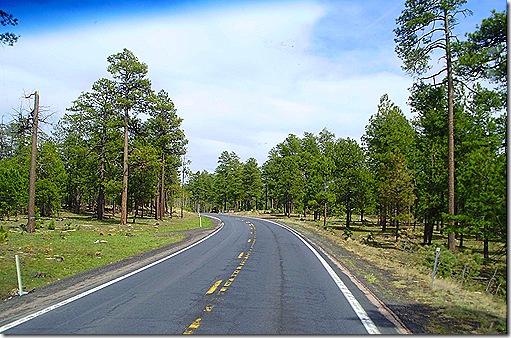 Most of State Route 260 is two lane, with frequent pullouts and passing zones. 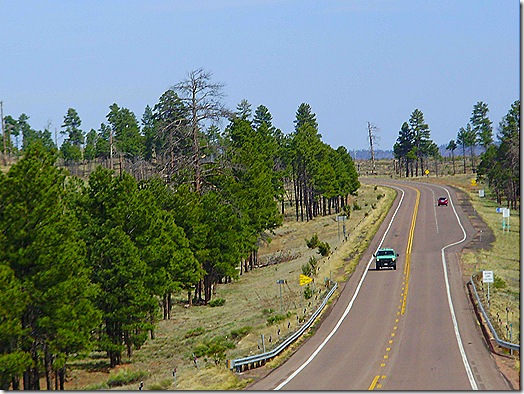 At Heber we started seeing the effects of the terrible Rodeo–Chediski Fire, which burned over 460,000 acres in 2002. It will take a lifetime for the forest to recover. The inferno actually started as two separate fires, both intentionally set, that merged into one terrible blaze that destroyed over 400 homes, and did over $50 million in damage. 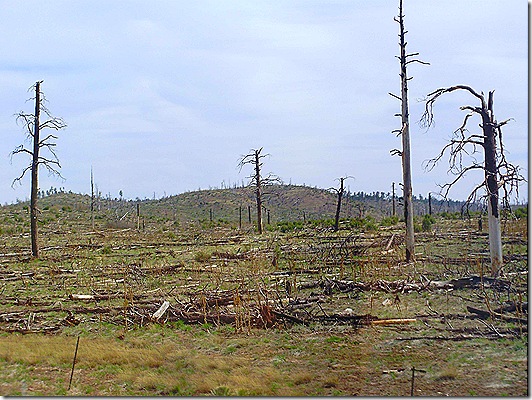 It makes me sick to know that all of this destruction was caused by a couple of idiots with no regard for anyone or anything. 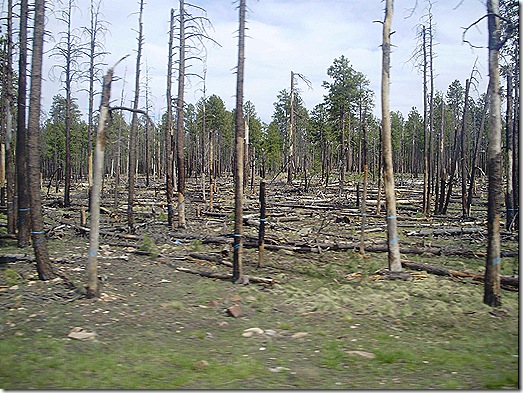 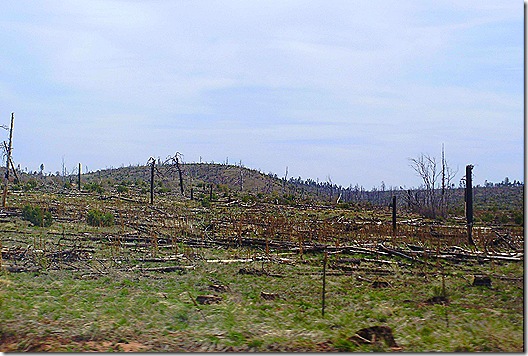 We arrived at the Elks Lodge in Show Low about 3:30 p.m. When we made this same trip in our bus, it took eight hours, and in the Winnebago it was less than half of that.

The Elks Lodge has a campground with full hookup 50 amp RV sites, all for $15 a night, and we managed to get one that offered us a clear shot through the trees so our satellite TV dish would work, even if it is not 100% level. We do love our HWH jacks! 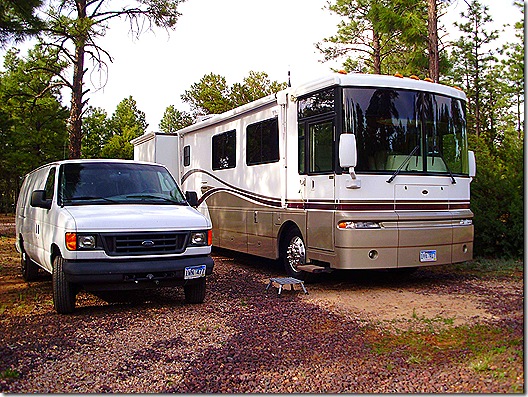 By the time I finished registering at the lodge, my daughter Tiffany and granddaughter Hailey were there to greet us.  Seven year old Hailey helped Grandpa hook up our water, electric, and sewer connections, and it only took me about twice as long as the chore usually does. Once we were settled in, Tiffany picked up her younger daughter, Destiny, and hubby Jim, and we all headed for dinner at Pizza Hut. I’m glad, because by then we were famished.

We’ll be here a couple of weeks, or maybe more, as we enjoy family time with Tiffany and her family before we start our summer travels. It’s a good place to be.

Thought For The Day – Learn from the mistakes of others. Trust me, you can’t live long enough to make them all yourself. I’ve tried!

10 Responses to “From Cacti To Ponderosas”