Nick's Blog » A Bit Of A Delay

Tuesday morning we were up by 7 a.m., which is way too early for anybody with common sense, but we wanted to get up to RV Renovators in Mesa, Arizona to get our Norcold refrigerator recall work done. No matter how early I have to get up, my body has its own time clock, and I still have to post my blogs after midnight, so I didn’t get to sleep until after 2 a.m. I sure hated to hear that alarm clock ring!

Then, for some silly reason, I had the old Helen Reddy song I Am Woman going through my head all night. Don’t you hate it when some tune gets stuck on automatic replay in your brain and you can’t stop it? Geez, at least it could have been something by some artist I like, maybe Jimmy Buffett or Billy Joel! Then again, maybe I didn’t have Helen Ready singing to me all night long. Maybe it was Miss Terry, sending me some sort of subliminal message not to mess with the Boss Lady!

We left Tra-Tel RV Park in Tucson right at 9 a.m. and had an easy run north to Eloy, where we pulled into the Flying J for fuel. Our motorhome was filthy, and there is a truck/RV wash right across the street, and since the nice folks at RV Renovators had told us our job would be quick and easy, we decided to get the rig washed first. They did a great job, a wash, wax, hand dry, tire treatment, and Rainex on the windshield, all for $93. Hey, you couldn’t get me to do all that work for that little money! Ask Miss Terry, she’s tried!

Of course, since I had just gotten the coach looking all spiffy, every bug in the state of Arizona with a death wish decided to end it that morning, and by the time we got to RV Renovators, the front end of the motorhome was plastered with bug guts. Yuck. Hey woman, stop that damned roaring and bring me a wet rag so I can clean this thing!

Office manager Cinda Nelson gave us a warm welcome, and she’s so darned pretty it was worth the trip from Tucson just to see her. We have heard a lot of good things about RV Renovators, and I’ll tell you what, I was impressed. The entire crew is friendly, and they let us know that they really wanted to make us happy. Here are Cinda, paint and refinish specialist Jesse Hilaire, and service writer Eddie Clayton. 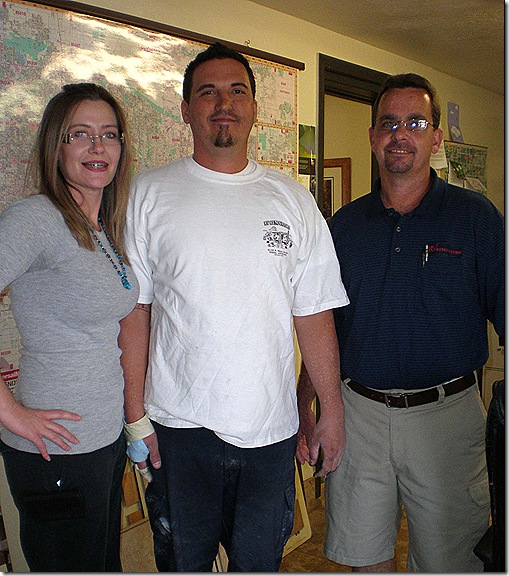 Bill, one of the techs, went right to work on our RV while Cinda gave us the grand tour. 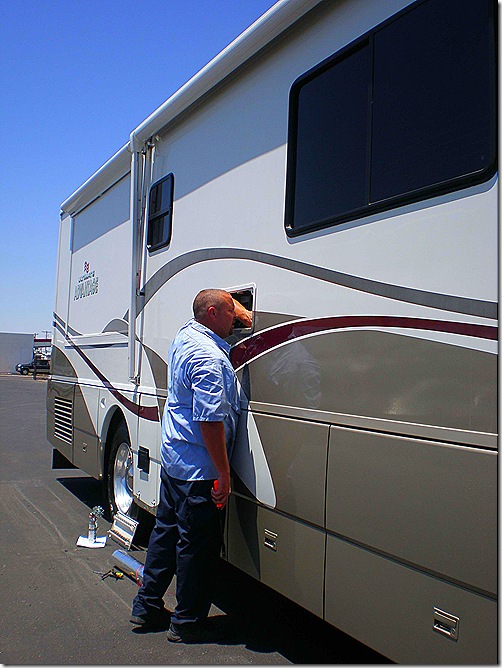 RV Renovators does everything from RV service, to body work, windshield replacement, fiberglass repair, major upgrades, and overhauls. This Class C is getting new skin, and it looks like quite a project. 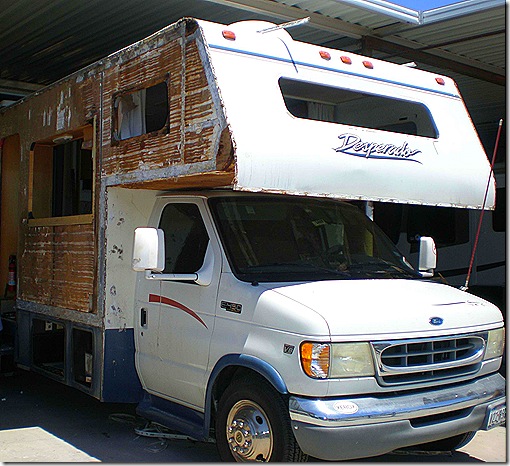 This motorhome is having a major rebuild. This is what your coach looks like with the slide out. Be sure to fasten your safety straps when you go down the road! 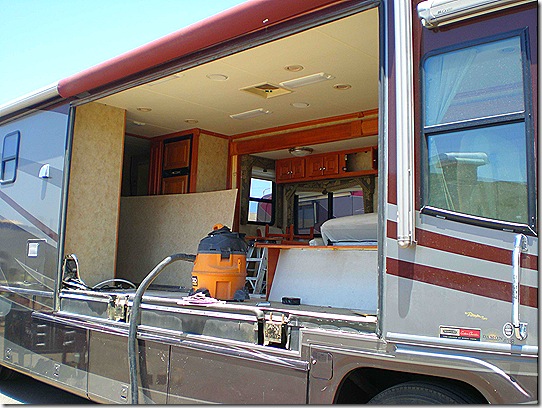 This Class A is getting a new floor installed. We may replace the carpeting in the front of our Winnebago with some type of laminate flooring one of these days. 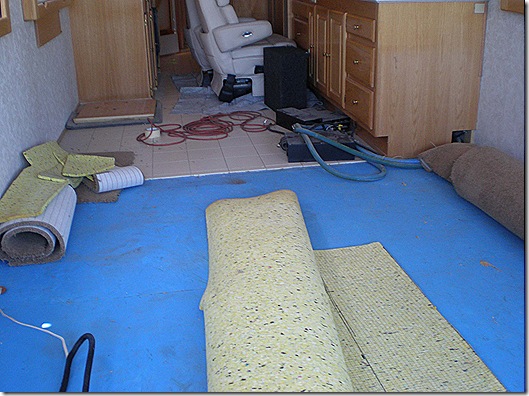 Hmmm…. I wonder if Miss Terry would let me have this for a tow car? It looks like it would be fun to play with. 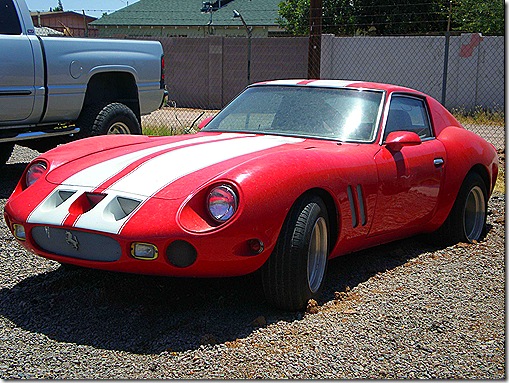 Cinda had told us our repair would take about an hour, but you just know nothing is ever that easy for me. Bill ran into a problem getting the refrigerator to come loose, and after a few failed attempts to figure out why it wouldn’t move so he could get behind it and do the upgrade, a phone call back east to a Winnebago expert revealed that not only is our Norcold attached to the side wall like in most RVs, it is also bolted down through the roof! So Bill got a ladder and went up on top, where he peeled away the caulking, removed the screws, and then a plastic cowling. Still no luck. The darned refer would not budge! 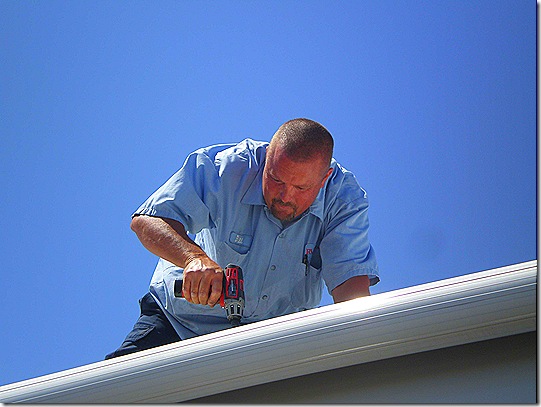 Further investigation revealed that the refrigerator is also sealed to the compartment floor with some type of silicone adhesive. When Winnebago builds a motorhome, they don’t cut any corners.

By then it was late in the day, and the folks here needed to get an authorization from Norcold for the extra labor involved, since this is billed as a “quick and easy” job. Of course, Norcold was closed by then, so that wasn’t going to happen anytime soon.  Cinda, Bill, and everybody else were apologizing all over the place for the unexpected delay, but what the heck, things happen.  If you live the RV lifestyle, you have to be able to roll with the punches sometimes. It’s no big deal, we know we’re in good hands, and we don’t have to be anyplace special anytime soon.

They parked us behind the shop, inside a secure fenced yard, and gave us a key to the gate so we could come and go as we pleased. David and Lynn Cross, whom we met at our Gypsy Gathering rally in Yuma in March, are here getting some work done too, and our motorhome is parked next to their beautiful Executive. We had 50 amp electric, and we were very comfortable. Today’s a new day, and I’m sure they’ll get things taken care of with Norcold. 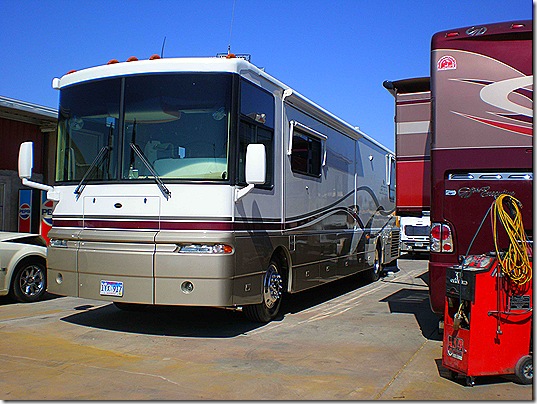 One final note, I said in yesterday’s blog that Miss Terry and I were betting on how long it would take the Apple Store in Tucson to get my 3G iPad in, and Terry said they’d contact me as soon as we got to Mesa. Darned if she wasn’t right! A few minutes before we arrived at RV Renovators, they notified me that it had arrived. I need to have Terry start buying lottery tickets. She is woman, hear her roar!

Thought For The Day – Old age is when you still have something on the ball, but you are just too darned tired to bounce it.