Nick's Blog » The Things You See In Vegas

It’s entertaining just to look around you in Las Vegas. Not just for the fancy casinos, but some of the people you see on the sidewalks and in the restaurants seem to be from some other world. And not one I’d want to visit!

I’m not sure which it was, but I saw either a six foot tall peacock strolling down the Strip the other day, or the best reason to outlaw the Mohawk hairdo that ever existed.

Okay, I know that I’m a fat guy.  I’m not proud of that, but I have reached that stage in my life where I accept myself as I am. So I don’t wear clothing like wife beater T-shirts, or go around without a shirt on at all. I just can’t subject the general public to that kind of visual abuse.

But here in Vegas I’ve seen both men and women who make me look anorexic wearing less clothing than you’ll see on college kids on Spring Break! There should be a rule that if you have more square inches of skin showing than you do square inches of fabric covering it, said skin should be able to defy the laws of gravity! If you have more belly hanging out under your shirt than what the shirt covers, just stay inside, okay?

Maybe just as interesting are the women we’ve seen here who are on the far side of middle age, but who run around in slinky clothes, wearing enough makeup to camouflage a Winnebago, trying to compete with their granddaughters for attention. Ladies, take a hint – if your varicose veins clash with your fishnet stockings, it’s time to reevaluate your wardrobe.

People aren’t the only things that will make you take a second glance around here. Yesterday we spotted this truck at a Lowes store. Now there’s a guy who can probably fix your leaky faucet! 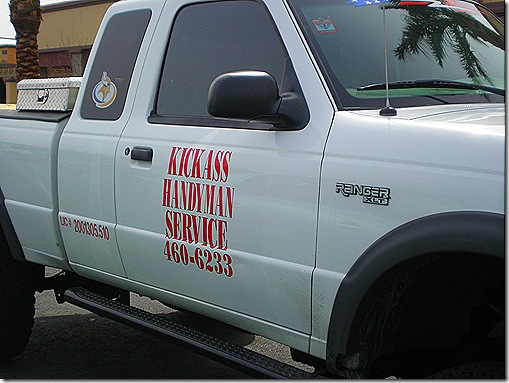 When we went to brunch yesterday, we spotted this pickup and camper that have seen better days, but the owner obviously has a good sense of humor. Check out the sign in the windshield. 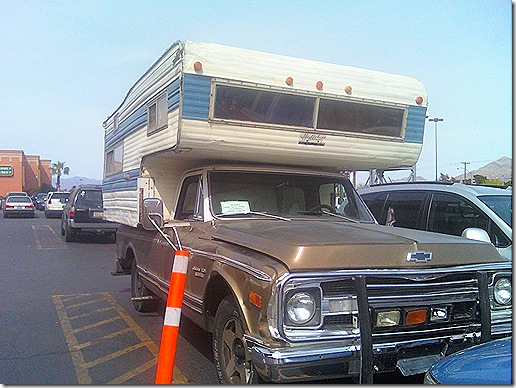 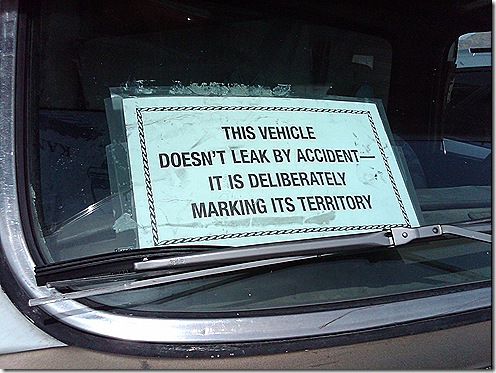 Another sign, which I missed, but my friend Joe Long sent me from a recent visit he made to Las Vegas, is the kind of place where I’d like to hang out. 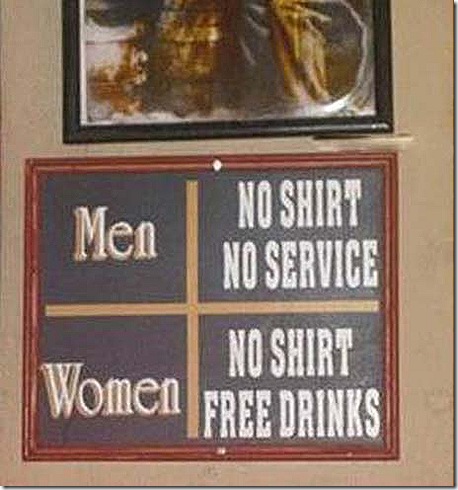 Even the names of some of the businesses here are memorable. Greg White found this ad in a tourist guide he picked up somewhere while we were running around.   I guess there are some serious pet lovers in Las Vegas! 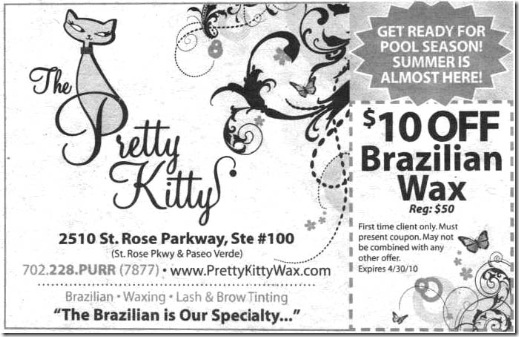 After spending hours changing out the motor for our jacks and slide rooms a couple of days ago, yesterday Greg was back at it. The original 40 amp fuse for the slide motor had burned out when the motor started failing, and since I couldn’t find a replacement fuse, we stuck a 30 amp in as a temporary fix. Since then I got the proper fuse, and Greg crawled under the Winnebago to put it in.

Then he swapped out the air chuck for the air compressor under the front end of the motorhome for one that will work with a tow truck if we ever need to release the air brakes to be towed.

We have had a problem several times with the battery in our van going dead while we were towing it behind the RV. Greg installed a plug-in charge line from the motorhome’s batteries to the van’s battery, which will alleviate that issue.

Another thing that has been a constant irritation is that before we bought our van, the previous owner had installed a cheap security system that never worked right, and we didn’t have the remote control for it. After two years of trying to find a replacement remote control at several Ford dealers and aftermarket shops, we gave up. The doors lock automatically when we start the engine, and unlock when we turn the engine off. That’s fine when Terry and I are both in the van, but if there was just one of us, we were constantly laying across the passenger seat reaching to lock or unlock the door. Greg tracked down the wire that powers the passenger door lock and disabled it, which will make life a lot easier for us in the future.

I hope Greg never discovers the slot machines and buffet dinners here in town, or he’ll disappear and I’ll never get anything else done!

Bad Nick didn’t want anything to do with all of that work, so he stayed inside and posted a new Bad Nick Blog titled The Happy Pauper. Check it out and leave a comment.

5 Responses to “The Things You See In Vegas”