Yesterday morning we left the Yuma County Fairgrounds, our home for the last several weeks, and drove 85 miles north on U.S. Highway 95 to Quartzsite, with Greg and Jan White following us in their American Eagle. They had never been to this part of Arizona, so I played tour guide on the handheld radio, pointing out the Kofa National Wildlife Refuge, Yuma Proving Grounds, and Castle Dome as we motored north.

In Quartzsite we left the main highway long enough to make a half loop around town to give them a feel for the place, though there were only a handful of RVs scattered about here and there, as opposed to the thousands that cover the desert in January and February.

From Quartzsite, we continued north on State Route 95 through Parker, then along the Colorado River through what is known as the Parker Strip, a land of dramatic mountains, cool water, and scenic beauty. I always love this drive, it’s a good two lane road, with plenty of pullouts if you need them. However, unlike past trips in our old MCI bus conversion, we didn’t need them. The Cummins diesel engine powered us right up the hills without blinking an eye!

Arriving  in Lake Havasu City, we parked both rigs at the Elks lodge, and I went inside to obtain permission to leave them there for a couple of hours, while Greg unhooked his Dodge pickup. Seeing the London Bridge was on Jan’s bucket list, so we drove across it, and then back again, then we parked and got out to see the historic bridge and checked out the shops in the small English themed village in the bridge’s shadow. 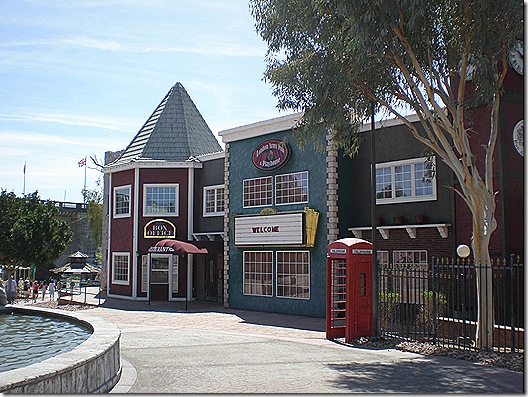 It must be Spring Break, because later on Greg told me that there were some pretty young ladies in skimpy bikinis and other revealing clothing. I didn’t notice them at all, because I was busy taking pictures of Miss Terry, and I only have eyes for her. 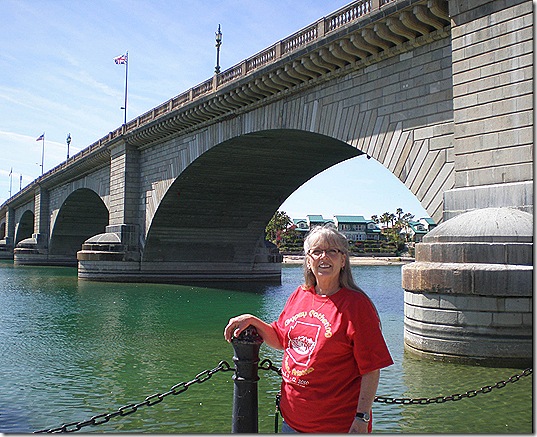 We grabbed a quick snack at Dairy Queen, then got back on the road and drove another 23 miles north, to hook up with Interstate 40. We took the interstate a few miles west to Exit 1, then got onto a narrow two lane road that had more nasty twists and turns than a politician’s biography. I’m sure Greg and Jan, following along faithfully behind, wondered just what kind of an adventure this crazy man was taking them on, and Miss terry uttered a reservation or two herself. But, eventually the road smoothed out, we rejoined State Route 95 through the Fort Mojave Indian Reservation, and came in to Bullhead City, where we crossed the Colorado River into Laughlin, Nevada.

Harrah’s Casino in Laughlin has an RV parking area where you can dry camp for $5/night, or $25/week, but every other casino seemed to have signs advertising free dry camping, so what’s up with that? We saw lots of RVs dry camping in designated parking lots at casinos all through town.

We stopped for the night at the River Palms Casino, which has a free dry camping area high on a hill, with great views of the casino lights below. Security told us we could get a free permit to stay up to 14 days. Then we would need to renew the permit, but we could do so for as long as we wanted to. 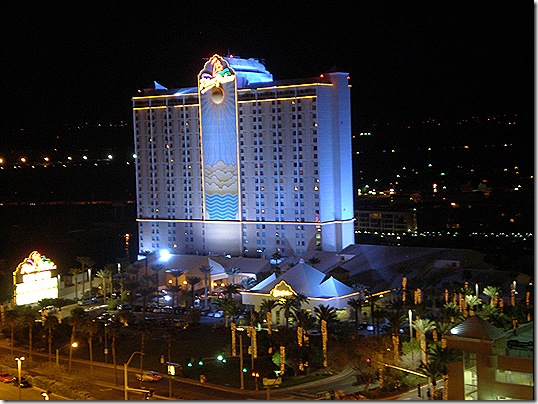 We registered, parked our motorhomes, then headed back to the casino for dinner. If you join their free Players Club, you get a free T-shirt, and on Monday and Tuesday nights, two prime rib buffets were $9.95 with the Players Club card.

The line to register for the Players Club was long, and the line for the buffet was even longer. I must have been tired and cranky. Or else the bunch of French Canadians in line in front of us just ticked me off when they let some of their friends cut in ahead of us. People in line started to grumble, and Bad Nick emerged and told them that was bulls&%# and to go to the back of the line. Two did, but one lady stood firmly and said “These are my friends!” I told her that Greg was my friend, but if he tried that crap, I’d throw him out of line too!

One of the guys in their group turned around and told me in very good English it was okay, she was with him. I assured him that it wasn’t okay, and that the next time I came to his country, I’d be sure to be a rude jerk too, He gave me that smirk some folk use when they think they are being funny,  and played the old “I don’t understand English” thing with me. I told him that I knew that he understood me very well, and that he understood exactly what I thought of him and his crowd. I’m sure I embarrassed Miss Terry, Greg, and Jan, but once in a while somebody has to stand up on their hind legs and tell the jerks of the world where to get off. Besides the only place more dangerous to be than between a mama bear and her cubs is between a fat man and his food!

Today we plan to leave early and continue on to Las Vegas. Our leveling jacks are acting up again, and would not work when we arrived in Laughlin. Hopefully we can get that issue resolved in Las Vegas, and then just play tourist and relax for a while.

Thought For The Day – Only dead fish go with the current.