We came to Las Vegas because we needed a little vacation after our Gypsy Gathering rally in Yuma, Arizona a couple of weeks ago. As it turns out, relaxing is hard work!

We have been playing tourist with our friends Greg and Jan White, and between seeing the sights of Sin City, and the time we spent replacing the motor for our HWH leveling jacks and slide rooms, we’ve been busy every day. But we sure are having a lot of fun!

Yesterday started with lunch at Buffalo Wild Wings in Henderson, and then a walk across the parking lot to Panera Bread, where we bought a dozen Asiago cheese bagels. Our friends Barry and Jan Kessler introduced us to Panera Bread back in North Carolina last fall, and we immediately became hooked on their delicious bagels. We’ve been looking for another Panera Bread ever since.

Our next stop was the Atomic Testing Museum, just a couple of miles off the Las Vegas Strip. Since 1951, the government has been conducting tests with atomic bombs and experiments in nuclear technology at a location north of Las Vegas. The museum had some very interesting exhibits, and we learned a lot about how the world was changed as a result of the work that was done here. 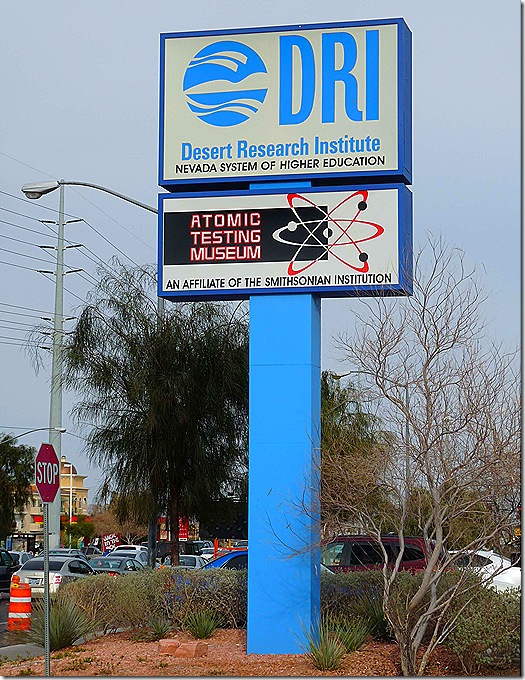 One of the things I have wanted to do was to visit Fremont Street, the famous Glitter Gulch area of old downtown Las Vegas, to see the light show. We decided that last night would be a good time for that, but when we arrived, there was some kind of big rally or cultural event going on, and the streets nearby were packed. Even more so than on a weekend night. We all mutually decided that we’d skip the Fremont Street Experience, and hope to come back another night.

Several people have written to suggest that we see different shows in Las Vegas, but after looking at the cost, we just cannot justify it. Prices per ticket for Blue Man Group start at $100 and go to $142; tickets for The Lion King start at $66 for marginal seating, up to $170; and if you want to see Phantom, you’ll pay anywhere from $78 to $174. Our budget won’t handle that, and even if it could, we’re too frugal (read cheap) to spend that kind of money when there are so many things to see and do for much less. We’ve had a great time just cruising the Strip and enjoying all the sights, people watching, and checking out the local eateries.

We’ve got a few days left in Las Vegas, and we’re watching the weather reports for our old hometown of Show Low, Arizona. We hope to get there sometime around the first week of April,  to spend some time spoiling those granddaughters of ours. But this weekend, the overnight temperatures are supposed to drop into the upper 20s. We really, really don’t want to be anywhere that cold!

We plan to spend a few weeks in Show Low, and then our schedule is kind of up in the air. We had planned to visit Branson, Missouri on our way to Forest City, Iowa for the Winnebago Grand National Rally in July. But, we learned a couple of weeks ago that Terry’s son, Casey, is getting married in Vail, Colorado in mid-July, so that changes everything.

We’ll probably hang our here in the western half of the country until after the wedding, and then we’ll have to make a beeline for northern Michigan to get Terry’s annual checkup with her oncologist out of the way, and then scoot right down to Elkhart, Indiana to get things in place for our Eastern Gypsy Gathering Rally August 30 – September 3. I hope to have the rally registration page uploaded to our website in the next few days, if I can find time in my busy vacation schedule.

Thought For The Day – Advice is what we ask for when we already know the answer but wish we didn’t. -Erica Jong

8 Responses to “Relaxing Is Exhausting!”