We had 221 RVs at the rally, and nearly 300 people who are staying in local RV parks here in Yuma came in on day passes. That’s a pretty good turnout, and we were very pleased with the numbers.

In looking over the feedback forms and the e-mails we have received about the rally, we see a common theme in them. The biggest complaints we had were about a lack of power. A lot of people said that they expected 30 amp hookups, but we seldom find that at fairgrounds or RV rallies. The 20 amp power more commonly available is enough to keep your batteries charged, but as soon as people start using coffee pots, microwave ovens, and curling irons, circuit breakers start tripping.

The noise caused by aircraft from the Marine Air Station was also a problem for some people, but there really isn’t anything we can do about that. But, a lot of people said that while the noise was somewhat bothersome, it was no big deal, and that they would rather put up with that than wading through the mud at the Pinal County Fairgrounds in Casa Grande, or the noxious smell from the nearby dairy there.

There were some other issues raised and suggestions made for future rallies at this venue, and in a meeting yesterday with the fairgrounds management, I think we resolved most of them. Unlike the people running the fairgrounds in Casa Grande, the management here in Yuma is eager to earn our continued business, they listen to our needs, and they try to address them.

The fairgrounds is going to increase the electrical power available for RV hookups, as well as the number of “spider boxes” used to supply temporary hookups during rallies. They hope to increase the amount of electric available in the north parking area (Lot B), as well as bringing power to a new area where we should be able to park 30 or more RVs.

Next year the rally will be March 7-11, right here at the Yuma Fairgrounds. We plan to have a food vendor on site, we will rent a couple of six passenger golf carts to shuttle people around, and we have arranged for the use of an extra building for vendor seminars, which will solve the problem of noise in the large vendor building interfering with seminars. Another complaint was low water pressure in the north lot, which has been resolved already. Apparently there was an underground leak, which they fixed Monday.

This rally was a learning experience, and we are putting those lessons to use.  I also obtained permission for our parking crew to come in a day early and dry camp next year, which will speed things up on Early Bird parking day.

This year’s rally was a lot of hard work, and a lot of fun. We’re already looking forward to next year!

Our Winnebago Ultimate Advantage really needed a bath, and Greg and Jan White’s American Eagle was just about as bad. So yesterday we had a mobile crew come in from Road Runner RV Wash, and they washed and hand waxed both rigs from the roof down. There are several companies that provide this service to the snowbirds here in Yuma, and they keep pretty busy. The cost for our 40 foot motorhome, including hand waxing, was $100. 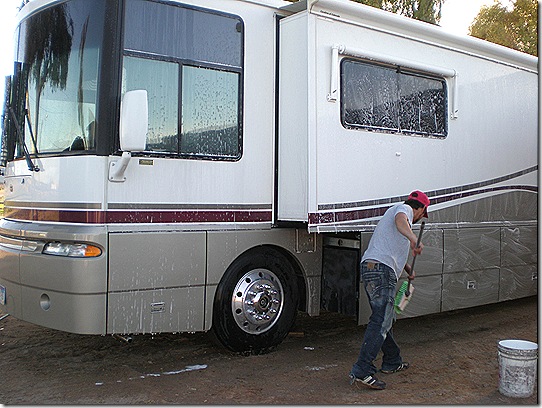 Our van was coated in mud from parking RVs in the rain last week, and when I asked how much it would be to do it too, I was told $10. It costs me more than that  do the job at a car wash myself! 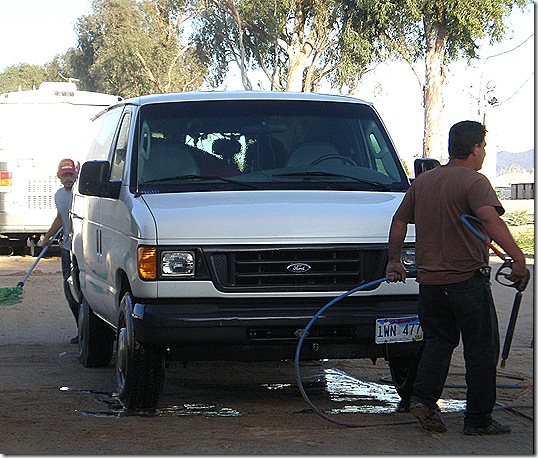 Today we are going to leave Yuma and caravan north with Greg and Jan. They have never been to Lake Havasu City or seen the London Bridge, so we’ll make a stop there to play tourist, and then we’ll go on to Laughlin, Nevada for a night.

We have reservations at the Thousand Trails in Las Vegas on Wednesday, where we plan to just relax and unwind for a week or two, while we wait for the weather to warm up in our old hometown of Show Low, in northern Arizona. Once we’re sure winter really is over in the high country,. we’re headed there for a much needed grandkid fix.

Thought For The Day – ‘Normal’ is just a setting on the dryer.