Nick's Blog » And Then It All Went To Hell

Back when I was in the military, I spent some time teaching firearms and close quarters combat at the U.S. Military Academy at West Point, New York. One of the things that we tried to stress to the Army’s future leaders was that you can plan and strategize all you want to, and you may know exactly how an operation is supposed to go. But once you put boots on the ground, everything can go to hell real quick, and then it’s time to improvise. Yesterday proved to me that the things I learned way back when, still apply today.

This is a brand new fairgrounds for us, and it’s laid out differently than any other where we have held our rallies. Instead of just one or two big open fields to park RVs in, like most fairgrounds, this one has one relatively small field on the south side, a large field on the north side, and dozens of little nooks and crannies with electrical hookups where we can sneak in a single rig or two.

I thought we had our parking plan laid out pretty well. I thought I had conveyed that plan to our hardworking volunteers who man the parking crew. And I thought that the folks who were coming in as early bird arrivals would have read the instructions I sent them about the parking crew meeting them when they arrived at the fairgrounds. It sure sounded like a good plan to me. And then everything went to hell! 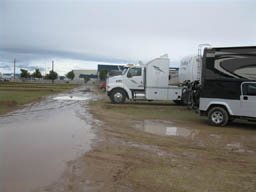 My first suspicion that we were going to have problems was when the weather, which has been nice here for the last two weeks, suddenly turned ugly. Yuma is supposed to average about five inches of rain a year. I think we got that much yesterday! I would have measured it to tell you for sure, but the wind, hail, and lighting distracted me. We had standing water and mud everywhere!

Then early yesterday morning one of our most seasoned parking volunteers, whom I had planned to be the leader, called with a family medical emergency and could not make it.

We had planned to stage everybody in the big parking lot in front of the fairgrounds, but a lot of RVs just breezed merrily past the parking crew as they tried to wave them down and stop them, and soon we had a bottleneck at the gates and inside the fairgrounds, while the folks who were arriving and following the parking crew’s directions to move into the staging area began to pile up out front.

The Good Sam rally was ending yesterday morning, and we had hoped they would all be gone by noon, as expected. But there were several who just sat in the middle of our parking areas, waiting for the rain to let up. I can’t blame them for not wanting to travel in such bad weather, but some of them didn’t even want to go outside to unplug their rigs so we could move them out of our parking area and into a large lot on the other side of the fairgrounds, where they could wait out the storm.

In a rally situation, the only way to safely park RVs is one after the other in line. If you have somebody already in the middle of that line, you run into all kinds of problems, because you are trying to sandwich RVs in between the parked coaches, they have slides out that you have to avoid, and electric cords out that you don’t want to run over. It makes what should be a relatively easy job very difficult and time consuming.

We had a few people who got upset because they had to wait quite a while to get parked, while we sorted things out, and they let us know in no uncertain terms that we had really dropped the ball. No, I dropped the ball. I’m the guy in charge, and it all falls on me. I’m sorry. I don’t have any excuses, just the above explanation of what went wrong, and hopefully the lessons learned will make things better the next time around. I also apologize to anybody whom I snapped at or was short with while this was all happening. I was overwhelmed, and I’m sorry.

I have to say that most people were very patient and understanding, and we very much appreciate that. I also very much appreciate the parking crew, who stood outside in the pouring rain and mud, getting yelled at by upset people, and got the job done. I have no idea why they all didn’t walk off the job, but I’m sure glad they didn’t! We also had several people who had not officially volunteered to help with parking, but who saw we were in trouble, and just jumped in to lend a hand. Thank you all very much!

We had expected to park 135 RVs yesterday, all early birds who had registered to come in Sunday, and we had 52 indoor vendor booths reserved. By the end of the day, Miss Terry had registered 183 RVs, and 55 vendor booths! And there were still others who didn’t want to stand in line, and said that they were going to wait until this morning to come in to register! There were a lot of people who didn’t register early, or at all, they just showed up!

To add to yesterday’s fun and games, when I tried to move our Winnebago motorhome from the back corner of the fairgrounds to the front so we’d have it accessible for rally items stored inside, the living room slide refused to come in, hanging up about halfway out, and the HWH leveling jacks hung up. RV tech Phil Botnick came to the rescue and fixed it, and also checked out the gas side of our water heater, which stopped working again. I have no idea what the problem was with any of this stuff, because I never had a chance to talk with Phil about it. All I know is he got everything working again, and I need to hunt him down and give him large sums of  money. Thanks for always being there for us, Phil!

Then, later on, I was guiding an RV back into a parking space, and managed to trip and fall into a drainage ditch full of cold, muddy, water. I was so busy that I never got the chance to change clothes or dry off until I took my shower about 11 p.m. Can you say chilled to the bone?

The weather report is for sunshine today, and we sure need it! Hopefully we’ll have a better handle on things and parking will be at least a little easier today!

Thought For The Day – No matter how much you hope for the best, you should always plan for the worst.

19 Responses to “And Then It All Went To Hell”