Nick's Blog » Where Does The Time Go?

We have less than a week left in Apache Junction, and we have barely scratched the surface of all of the things we wanted to get done while we were here. Where does the time go? There are several people we have not gotten around to see, we wanted to empty and rearrange our motorhome’s storage bays, and I still need to replace our house batteries and the RV’s tires.

Terry was busy all day yesterday stuffing the new issue of the Gypsy Journal into envelopes to get mailed out, and she managed to make a huge dent in the job. I am always amazed at how fast she gets this monumental task done every time. She still has a lot to get stuffed, but she’s getting it done fast.

While Terry was doing her thing yesterday, I got the new digital edition uploaded and sent the link to our digital subscribers. I also mailed out several dozen rally information letters to folks who don’t have e-mail addresses and depend on snail mail.

I have a continuing problem with some folks who use e-mail filters to protect them from spam. I certainly see the need for such filters, and I don’t blame folks for wanting to keep their inboxes from being filled up with unwanted junk e-mail. Most folks who use a filter require anyone not on their approved list to fill out a quick form and usually you have to type in a set of letters and numbers to prove that you are a real person and not a spam belching computer robot. Usually, once you do this any future e-mails are accepted automatically. I can live with that.

But I have about three dozen folks who either subscribe to the digital edition or have registered for the rally who apparently have their programs set up so all e-mails have to be approved, because I have had to go through this process every time I try to send them a link to a new issue, rally information, or whatever. One fellow told me that only his children are on his approved list, everybody else has to jump through the hoops every time they e-mail him. He said it’s no big deal, it only takes a minute or two. That true, but multiply that by 36 or so people, and I lose a lot of time trying to get the information they want to them. It gets frustrating.

Meanwhile, we had ordered new slide toppers for our Winnebago motorhome, and the guy arrived yesterday morning to install them. He removed the topper fabric from the bedroom slide, and then realized his supplier had sent him the wrong size. He made a couple of phone calls and hopes to have a replacement in by today or tomorrow. 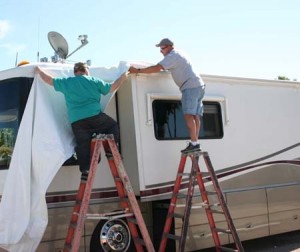 I made him measure the new cover for the large living room slide before he removed the old one. That one was okay, and he got it installed pretty quickly, with me holding up one end while he slid it into the channels that hold it in place.

The old toppers were in pretty sad shape, with several small holes and tears. A young man who does work here in the park came by to ask if he could have the old toppers to use as drop cloths when painting, and I was happy to give them to him, just so I didn’t have to lug them down to the dumpster.

We had to disappoint some folks yesterday morning, who called and wanted to come by for a visit, but we have so much to get done it just wasn’t possible. We hope they’ll understand and give us a rain check.

Thought For The Day – First things first, but not necessarily in that order.

6 Responses to “Where Does The Time Go?”